Best way to approach a brother FF (also a friend ) about pulling their weight...

This person is good guy, with respected family in the Department. I think this causes him to have a sense of entitlement, and he honestly doesn't contribute much around the station.

THE 2011 FIREFIGHTER on Backstep Firefighter.

My Brothers and Sisters Under The Maltese…

You CAN Fight the Same Fire Over Again

Today’s structure fires are becoming more infrequent yet more aggressive all the time. This, along with the fact that we’re in a construction era where building materials are becoming less resistant to the damage fire can cause, makes it imperative that we get the most experience and education possible out of the fires we do have. How do we accomplish this in a manner that translates to real learning, where we can make decisions based on real-life…

New photos in my profile

I added a couple photos of my Brother during happy times because just pictures of the blast and memorials is too depressing.  I wanted everybody to know Mike was a well rounded person who loved every minute of his 39 years here and according to my dad planned on being a firefighter from the time he could speak.

Has anyone heard if there is a Team USA uniform for the NYC 2011 WPFG?  If so, how do I order it?

The tragic events in the City of Chicago on Wednesday December 22, 2010, when Chicago Firefighter Edward… 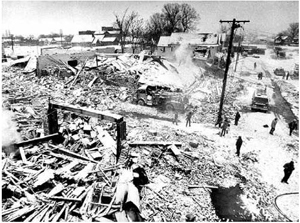 The explosion injured approximately 60 other people, damaged a dozen city blocks and caused millions of dollars of damage in fire equipment. 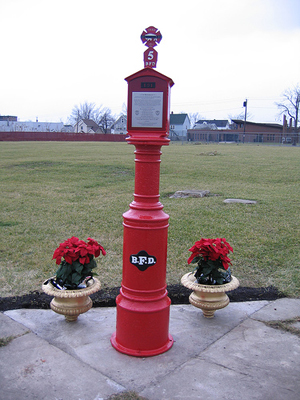 A memorial to the five members of Buffalo Fire…
Continue

If you see a fat man who's jolly and cute,

wearing a beard and a red velvet suit,

if he is chuckling and laughing away,

while flying around in a miniature sleigh,

Tales from a tailboard fireman: death on the job.

Once again the tragic news of firefighters killed. Two more deaths in Chicago, the city where I grew up. The firehouse where I got my firemanship merit badge in 1957 is still in use today. It was old then, a horse barn converted to house gas rigs years before that. I left Chicago years ago, but I still feel an attachment and a great sadness for the loss. I remember the firemen sitting on chairs on both sides of the apparatus door and peeking a look inside when I walked by. Those guys responded… Continue

May my brothers be forever remembered.:(

I salute to them.

I have not been around for most of this year so haven't been very active on here. Last year my Mom was diagnosed with pancreatic cancer. I got to fly down in October and spend a couple of weeks with my Mom and Dad, and with my brother and 2 of my sisters that also flew in to spend some time with our parents. I had just broke my ankle the week before I flew down so was on crutches and couldn't put any weight on my leg. So, I told my Mom I would come back to help when I got the cast… Continue

Sadly though, 11 years ago this month a similar fire claimed the lives of 6 Worcester Mass Firefighters who were lost as they searched for 2…

To the Fire Fighter Nation,

I would like to thank all the people that have sent there prayers, and kind words to me for our brave Brothers that answered the final bell this morning 335. Please keep all of the deceased and injured in your thoughts and prayers. THANK YOU!!
BE SAFE!!!

On Dec. 22, 1999, Dave McNally, Nathan Tuck and Jason Bitting died fighting a residential structure fire in Keokuk, Iowa. Although on the surface there was nothing special about the fire—no unusual fuel load, no explosions, it wasn’t a particularly large structure—this incident demonstrates… Continue

I have long debated whether I should pursue my FF 1 certification too. Eventually I would love to work as a Flight medic or a FF/Medic but I haven't totally decided yet. Until the next medic class cycle starts in Jan 2013, I have some time to to get pre-reqs and a FF1 completed. My biggest obtacle is finding the time to complete a FF1 Academy without quitting my current (non Fire/EMS) job. I've done some research on different FF1 programs and keep coming across this…