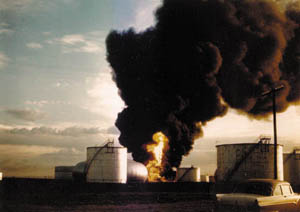 Flammable hexane and pentane vapors began escaping from the spheroid designated as No. 199 at the Shamrock Oil and Gas Refinery. A relief valve released, turning pentane loose to the ground. The wind was blowing toward the process area, specifically an asphalt tank about 350 feet away under which a small fire was kept. This photo shows tank 199 before the BLEVE. 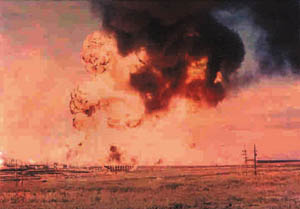 At 6:53 a.m., the 12,000-barrel, pumpkin-shaped spheroid tank containing about 500,000 gallons of pentane and hexane gases exploded, sending a mushrooming fireball into the air and burning fuel to rain down for more than a mile. 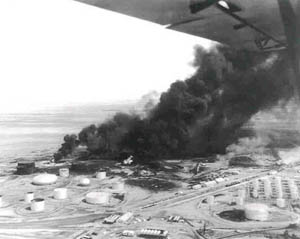 An aerial view of the refinery after the BLEVE.


What Went Wrong
On the morning of July 29, 1956, flammable hexane and pentane vapors began escaping from the spheroid designated as No. 199 at the Shamrock Oil and Gas Refinery, a petroleum tank farm located between the small towns of Sunray and Dumas, Texas. According to an article in Industrial Fire World, a relief valve released, turning pentane loose to the ground. The wind was blowing toward the process area, specifically an asphalt tank about 350 feet away under which a small fire was kept. At about 5:45 a.m., vapors ignited, then flashed back to No. 199.

According to the NFPA, for the next hour, firefighters and plant workers were occupied with both a ground fire involving a liquid spill from a possible line leak in the vicinity of the tank’s pump inside the dike, and a fire at the gauging device and vents. Eventually, flames from the dike fire rose 40 feet high, enveloping the spheroid.

At 6:53 a.m., the 12,000-barrel, pumpkin-shaped spheroid tank containing about 500,000 gallons of pentane and hexane gases exploded, sending a mushrooming fireball into the air and burning fuel to rain down for more than a mile. The fireball ignited a 20,000-barrel diesel oil tank that contained 6,500 gallons, as well as two tanks of crude oil; one contained 6,000 to 8,000 barrels and the other contained 2,000 barrels. These tanks were 450 to 550 feet from spheroid No. 199. An 80,000-barrel with a floating roof containing gasoline located about 225 feet away had two seal fires that were extinguished. A sixth tank smoldered but was also extinguished.

According to GenDisasters, 15 firefighters burned to death almost instantly when the hot wall of fire shot across the ground. The other four died later of complications from their burns. Forty others, exposed to the explosion from a great distance, were severely burned.

The fire burned for days.

Additional Details
According to an NFPA article, No. 199 was one of two identical tanks designed for 15 pounds-per-square-inch working pressure built in 1940. Each of these spheroids was equipped with two 6" pressure-vacuum vents, which were set at 15 psi and connected to an 8" vent and tee connection. Both vents were equipped with return bend weather hoods that effectively acted as U-joints, directing anything escaping from the vents downward. The article stated that, “In case of vapor ignition at the vents, as occurred in this case, there would result a direct flame impingement onto the top of the tank in the vapor space.”

McKee Fire Chief Mike Roberts said a decision was made to begin pumping out No. 199, increasing that vulnerable vapor space. Slowly, the potential for a boiling liquid expanding vapor explosion (BLEVE) increased.

According to Industrial Fire World, Bob Hamilton, a reporter for the Moore County News, entered the refinery against advice from the sheriff and plant guard. He reported that two groups of firefighters were attempting to approach the spheroid from opposite sides while a third group cooled nearby exposures. Three fire trucks were present.

According to the NFPA, the refinery brigade laid in a hoseline from a fire hydrant in the process area to their foam truck. “They attempted to use foam to extinguish the ground fire but experienced considerable difficulty due to the intense radiated heat. It was reported that they were attempting to lay in longer foam lines prior to the rupture of the spheroid. The Sunray Fire Department laid in a water line on the downhill side of the tank farm, and the Dumas Fire Department laid in a line from the upper side. All hoselines were approximately 900 feet in length.”

According to Industrial Fire Brigade, Dumas and Sunray firefighters used the water available to them to keep adjacent tanks cool. Observers noted that hose streams were placed on a cone roof tank about 150 feet away from the burning spheroid. Another hoseline was seen being used to protect a floating roof tank containing gasoline also about 150 feet away from the fire. It was further reported that a water line was used at least once on No. 199. Seal fires on adjacent floating roof tanks were promptly extinguished.

Hamilton wrote at the time that a loud, roaring flame about 50 feet high spouted from a vent atop the burning spheroid. Flames from a ground fire were also intense. Firefighters were preparing to move closer with additional equipment when the alarm was sounded to evacuate. The rising heat had become too much, forcing firefighters to even abandon cooling the other tanks.

Then, over an hour after the original fire was reported, the top of the spheroid ruptured violently. According to Industrial Fire Brigade, the fact that the spheroid lasted an hour surprised some because LPG vessels exposed in a similar manner had ruptured in as little as 15 minutes.

BLEVE Basics
Per the Industrial Fire Brigade: “BLEVE is a phenomenon often misunderstood, even by experienced firefighters. The textbook definition refers to a condition in which a chemical stored as liquid develops a gaseous vapor above it. Any rupture releases an overpressure of vapor inside. A sudden drop in pressure causes violent boiling of the liquid, refilling the vacant space with a terrific new overpressure of vapor. Such a significant overpressure of flammable vapor destroys the vessel containing it.

“However, in this case, flames somehow impinged on the pressurized vapor space above the spheroid’s liquid contents. Since metal loses its tensile strength when heated, a bulge likely developed in the spheroid caused by the pressure inside. Any impingement below the vapor space would have been sufficiently cooled by the liquid contents. Emptying the spheroid of product merely increased the vulnerable vapor space. Even with the relief valve open, the pressure inside would have been sufficient to cause a rupture or BLEVE at the point of impingement.”
NFPA Quarterly Notes
The NFPA Quarterly article cited the Sunray disaster as “another case which condemns the widely accepted practice of locating tank vents on pressure tanks in such a manner as to permit flame impingement on a tank’s vapor space.” It also made note of the following:
• Installation of a fixed water spray system on all pressure storage tanks would eliminate most of the hazard of a tank rupture by keeping the metal cool.
• If for any reason it is impossible to apply cooling water, all personnel should be removed at least 1,000 feet from the fire and, even at that distance, should wear protective clothing.
• Locating direct-fired heaters downhill from a volatile flammable liquid storage tank places an ignition source within the possible path of vapor travel.
• Cast iron should not be permitted in any flammable liquid piping, valves or connections.
• Pumps should be placed outside of a diked area to avoid exposure to fire.
• Installation of adequate fire mains in tank farms is necessary for fire fighting operations.