On Dec. 22, 1999, Dave McNally, Nathan Tuck and Jason Bitting died fighting a residential structure fire in Keokuk, Iowa. Although on the surface there was nothing special about the fire—no unusual fuel load, no explosions, it wasn’t a particularly large structure—this incident demonstrates how supposedly ordinary circumstances can mask life-threatening risks. “One might say that this fire was routine,” said Keokuk Fire Chief Mark Wessel in a 2004 interview. “Routine is no longer a word in our vocabulary. Other than pulling into the fire scene and seeing smoke from a residential structure, there was nothing else routine about it. There was nothing normal about that day.” 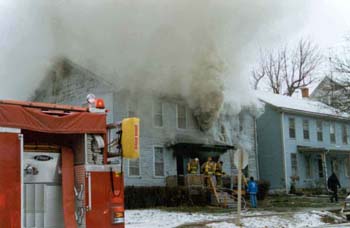 
Related
·Interview with Keokuk Chief Mark Wessel and FireEMSBlogs.com blogger Art “ChiefReason” Goodrich
·NIOSH report
·NIST Fire Model: Upon a request from NIOSH, the National Institute of Standards and Technology (NIST) completed a fire model of this incident. The fire model demonstrates growth and the fire’s reaction when different variables are introduced. 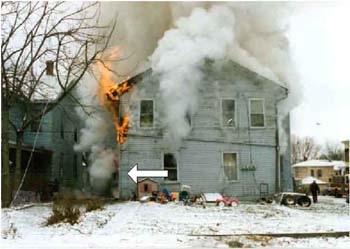 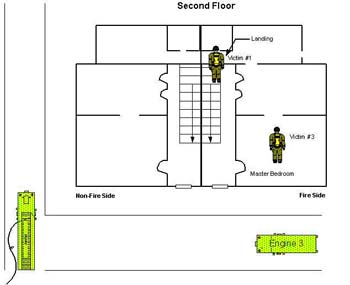 
Incident Summary
The following information is excerpted from the NIOSH report on this incident.

At approximately 0823 HRS, the three victims (and two additional firefighters) had cleared the scene of a motor-vehicle incident. En route, they received a call for a reported structure fire with the possibility of children trapped.

Aerial Truck 2 proceeded to the scene with the shift commander (victim #1) and an engine operator (victim #2). At 0827 HRS, Engine 3 was dispatched and responded to the scene with a lieutenant and an engine operator (victim #3). As Aerial Truck 2 approached the location of the structure, the shift commander reported white to dark brown smoke showing and requested six additional firefighters be called in.

When Aerial Truck 2 arrived on the scene at approximately 0830 HRS, a woman and a child were trapped on a porch roof at the front of the residence. The firefighters were informed that three children were trapped inside the house. Victim #1 proceeded into the house through the front door to perform a search-and-rescue operation. A police officer, who arrived on the scene before Aerial Truck 2, positioned a ladder to the porch roof and removed the mother and child.

The lieutenant from Engine 3 connected a line (200 feet of a 5-inch supply line) to the hydrant and then to Aerial Truck 2.

At approximately 0831 HRS, the chief arrived on the scene and assumed duties as the incident commander (IC). The IC instructed victim #3 to “gear up” and proceed into the house to assist in the search-and-rescue operation.

At approximately 0835 HRS, another firefighter went up to the front of the structure to begin an active fire fight and noticed that the hoseline was free-flowing, the hoseline had burned through and flames were protruding from the entrance. Note: It is believed, through interviews conducted, evidence at the scene, and a fire model developed by NIST, that the dining room flashed, causing secondary flashovers in the living room, and ventilation conditions created a path of least resistance up the stairs, injuring and disorienting the three firefighters enough to prevent their escape from the structure.

The three victims failed to exit as 12 additional firefighters arrived on the scene through a call-back method and began fire suppression and search-and-rescue operations. Victim #2 was located, removed and transported to a nearby hospital, where he was pronounced dead. Victim #1 and Victim #3 were later found and pronounced dead on the scene.

Chief Mark Wessel addressed each of these recommendations in the 2004 interview, including this comment about staffing: “This is what we learned: It’s not how many you respond with, it’s what you do with them when you arrive. If you lose perspective of the whole picture, it doesn’t matter how many you have.”

Share the Knowledge
Following this incident and the NIOSH investigation, the Keokuk Fire Department has made every effort to share what they’ve learned. Chief Wessel has been a passionate spokesperson, talking freely about his own role in the incident and about what others can learn from it. “You don’t have to experience what Keokuk experienced,” he says. “Why is it, we all know if we are punched in the nose, it is going to hurt like hell? Yet some of us still have to pick a fight to believe it. Let Keokuk be your punch in the nose. Let our incident be your incident. Study it. Pick it apart. Plug it into your operating procedures.”