A new pastor was visiting in the homes of his parishioners. At one house it seemed obvious that someone was at home, but no answer came to his repeated knocks at the door.

Therefore, he took out a business card and wrote 'Revelation 3:20' on the back of it and stuck it in the door.

When the offering was processed the following Sunday, he found that his card had been returned. Added to it was this cryptic message, 'Genesis… Continue

Its been awhile since my last blog but I'm back to say everything is going well for us,and we just found out its a boy we are having.Another firefighter for our family.My husband is so happy he says male power in the household.I tell him male power this ...if you know what I mean.I am so happy just to be able to share this with him its something I have wanted for along time now.He calls our son his baby budda.I told him if he keeps calling him that the baby will come out bald and chubby just… Continue

Before The Fire Service

I have always loved firefighting, I love the enviroment, the firehouse, the adrenaline. I hung out with the kids who lived in "scanner land" and were just dying when nothing was going on. I had always planned on being a volunteer, but my original career choice was Forensic Psychology, specifically, Criminal Profiling. I took college psych when I was in high school, and I loved it. I also became an explorer at this time and actually got to do training and learn firefighting technique first hand.… Continue

This is something very near and dear to me and something I feel very strongly about. I've wanted to write about this for a long time and a recent conversation with a…

Seems everything I post is being critical or whatever, but..
C'mon people..when you build your homepages..lets match the type color to the background..I see several pages, every time I look, that I cannot read because of color choices..
Remember we arent all young with 20/29 vision..and the clearer your pages are, the better the chance of others reading and making comments..

I'd had the idea of doing a running report on our incidents.

Can't be bothered! Maybe I'll just mention any of interest...

I don't think I've mentioned this one, but it was interesting. Happened a couple of weeks ago now, pager mid afternoon to support our neighbours in the full career service. Stangely, it was further into their area than we normally support, would normally be one of our career Stations supporting there. As it turned out, they specifically requested us. Nice feeling from that!.. Anyway. I get to the shed and so does… Continue

In and out of the saddle too much!

I'm back from my third deployment to Oklahoma. I hope you guys in Oklahoma stay safe and quit having disasters. nine in one year is enough! I will add some pictures of the time I spent there. Check them out!

This is just a little story I put together last year. Tell me what you think.

After God created the heaven and earth, He looked down and saw that the people He created were getting themselves hurt. So He sent down guardian angels to protect them. One day the angels came back and said to God, "We need some help. Regardless of what we do, the people are still getting hurt." When the angels left, God went to work on the specs for His new guardian angels. He said, "I will create an angel… Continue

The picture of a dog licking the face of a firefighter who had rescued her and her unborn puppies from a fire reminded me of an experience that happened earlier in my firefighting career.

Where I have been

You never know how you will react or how you will handle things until they happen. 2 months ago I would have thought I would fall apart and become a complete basket case. I now know I am stronger than I thought myself to be, and I have a complete new outlook on things.

This whole situation has kinda put my thoughts into a new perspective. From the moment I got the call about the accident my prayers went from "please… Continue

TO ALL OF FIREFIGHTER NATION. FIRST IF YOU GOING TO DO THE JOB IF ON THE FIRST CALL AN EMERGENCY GO'S OUT THE FIREMEN ON SEAN SHOULD HAVE DID A BETTER JOB ON SEARCH AND RESCUE TO HELP THAT OLD WOMEN THEY HAD TWO CREW'S WORKING ONE CREW SHOULD HAVE WORK THE FIRE AND CREW 2 SHOULD HAVE DUN A BETTER JOB ON THE SEARCH IT TOOK 30MINS TO FIND THAT LADY .THE FIRE CO. FROM ANOTHER TOWN WAS SECOND ON SCENE IT WAS PUT WORK TO OPEN THE GARAGE DOOR TO VENT THE BULK OF THE FIRE WAS DOWN THAT FIRE CO.… Continue

For a third time in a year tragedy has struck Delaware County. While operating at a working house Firefighter Nicholas Picozzi, Jr. of Lower Chichester Fire Co. was killed in the Line Of Duty. Crews tried as hard as possible to rescue him and some were injured in that process. We extend our condolences to the Lower Chichester Fire Co. and the Picozzi family in this extremely hard time. We also extend out well wishes to the injured brothers from Green Ridge and praying for a speedy and full… Continue

'To many firefighters, ‘air management’ still means waiting for the low-air vibration alert or alarm to sound, signaling it’s time to leave the building. This occurs when three-fourths of the air supply has been consumed. Many consider that such a procedure is acceptable during a routine room-and-contents fire in a small building. However, take a look at how many firefighters have ‘run out of air’ in residential fires and lost their lives! In larger structures, or where there are large numbers… Continue

I finally got my first real fire as an officcer...It was Saturday March 15th..My buddy Joe and I were sitting in his livingroom watching tv, and the tones went off....A working garage fire next to the garage we had only six months before...We had a great knock down and it felt great finally getting that first fire under my belt and I know I have a lot to learn about being an officer...Peace and God Bless to all...

Good news everyone i have passed yet another module i have two more to take before i can test for FF1 I am soooo excited.... 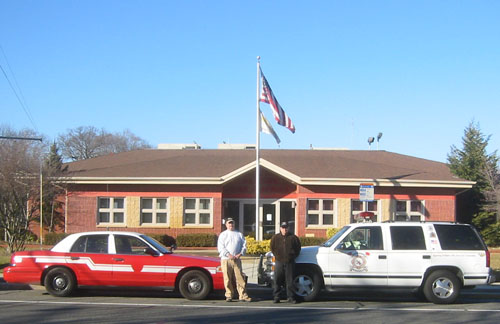 the terry Farrell fund was able to donate 2 vehicle to the DeGrasse Fire Department of upstate New York. A 2000 Ford LTD and a 1999 GMC Yukon were given to the fund from the Hampton Bays fire department. the fund also gave the DeGrasse FD 35 sets of turnout gear which were donated from the North Bellmore FD. Our fund is constantly on the loookout for good usable fire equipment and gear that can be… Continue

WELL IT'S BEEN A WHILE STILL WAITING FOR OUR ARBITRATION DATE,IT'S BEEN A LONG HARD ROAD OF STRUGGLING TO FIGURE OUT HOW TO DEAL WITH NOT BEIN A FIREFIGHTER FOR A YEAR AND A HALF(ALMOST)IT FEELS LIKE IT'S BEEN TOO LONG!! MY WIFE AND I ARE TRYING HARD TO STAY ON TRACK OF EVERYDAY LIFE (BILLS,FOOD,RENT)AND STILL CAN'T MAKE IT WORK!! U KNOW ALL THAT STUFF!! NEVER THOUGHT THERE WOULD BE A DAY WHEN ALL OF THE FIREFIGHTING WOULD COME TO SUCH A HAULT SO QUICK IN OUR LIVES,ALL FOR SERVING FOR WHAT I… Continue

I'm not sure what happened on Thursday pretty busy day for us here with 3 calls non of which amounted to anything overheated furnace 0547, 2 vehicle non injury accident provided traffic control 1236hours (had to have a talk with the engine crew about paying attention when flagging busiest street in town and those guy's were horse playing somebody could of got hurt), and dispatched muddled another one at 2225 dispatched 2 stations to a one car rollover which was handled by the neighboring… Continue