One of the issues that is consistently brought to my attention with theFireWiki is the issue of copyrights protection. While many people would love to post to theFireWiki, they are hesitant because of the Open License associated with it. The Open License says that
anything posted on the site become... in essence... public domain and
anyone can use it or do what they wish. This seems to make a writer
uncomfortable and I can understand why. So tomorrow, we are adding…
Continue

No fires just a couple of first responder type calls.

Second week in a row we went for forcible entry and the caller met us outside. "Damn-it"

Hey check my page out, an actual picture of me on a fire. Its my back but I know who I am

Why in a world of war, starvation,and disease do people have to have an attitude over little things. The little things shouldn't get us worked up, but for most of us it does. If we have no more of a life than that we are pretty sad. If we have all this time to nitpick at what everyone says then we need a hobby. So in short we need to do somethng besides complain about little things in this time of sorrow.

The city I work for is mostly a business/ technology office complex. Don't quote me on the numbers but we have something like 30,000 people that actually live in the city, but Monday through Friday our city swells to over 300,000 people. With six ALS engine companies, two ALS rescues, and one Truck company the call volume for 30,000 people isn't very high. This might be great for some people, but for me it makes for way to much down time. Don't get me wrong, I enjoy sleeping most nights, but…

The Whole Vollie and Career Thing

I spent a great deal of time constructing an intelligent post to a forum thread to find it had been closed to discussion, so I decided to post it on my blog. The whole vollie vs. career thing has just got to end. The fire service in this nation will continue to spin on its collective axis forever and there will never be resolution to this question, so why even ask it? In regard to the thread in question, I haven't seen any post regarding South Carolina and getting rid of vollies, so I don't…

It is our sad duty to advise you that our former President Larry Grilliot passed away peacefully in his sleep early the morning of 9/29/07 (while
recovering from knee replacement surgery on 9/21).. He had remained in the
hospital until Thursday 9/27/07 due to a blood clot, but was released home on
9/27.

Trying to make sense of it all.

Perhaps, I shouldn't be here speaking on this but then again I won't let their loss be forgotten.

God Bless them and their Families.

I passed the Elk Grove Village Fire Dept written exam. Next stop, physical exam on the 20th of October.

Hey guys heres the question im looking to start a side buisness and am lost on what to do espically since winter is almost here and the lawn care buisness is so overwhelmed as it is. Would any of yall have any suggestions for me that wouldnt take alot of start up money thanks guys please help

I am a 40 year old working in the Baltimore County Fire Dept. Just finished my 18th year on the job on Septeber 12th, but i also have about 5 more years as a volly in county prior to being hired.

I work at an Engine, Truck and Double Medic house on the West Side. (The Busy Side) Although we are not in the Fire Triangle we see our share of the red stuff for being in the County.

I took my Fire Officer I test and....

Despite getting a flat tire and having a nearly flat spare, I made it to my FOI test (ok, it was 5 minutes late). The test center personnel were extremely nice and after getting settled in, I finished the test in just under thirty minutes.

This caused me some panic, because I was certain that I had bombed it. However, I passed and got a really nifty and official looking piece of paper with my photo on it. So, I can now go through my department's clearing process (as soon as they write…

On behalf of the Marion Rural F.D. Our thoughts, and prayers go out to the familys, and friends of our fallen brothers 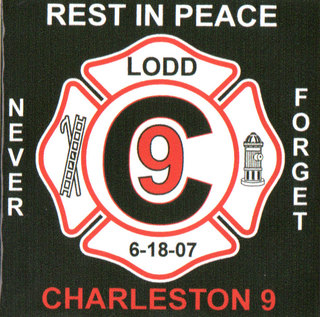 The Creation Of A Firefighter

When the Lord was creating Firefighters, he was into his sixth day of
overtime when an angel appeared and said, "Your doing a lot of fiddling
around on this one."

The Lord said "Have you read the specification on this person?

Firefighters have to be able to go for hours fighting fires or tending to a
person that the usual every day person would never touch, while putting in
the back of their mind the circumstances. They have to be able to move at… Continue