Hello,
I was wondering what your thoughts were about college degrees and getting hired onto a fire deptarment. I currently have an AAS in fire science Tech as well as my EMT basic card. I am currently working on my FF1/FF2, while I am attending school full time for Kinesiology. I kinda have a lot on my plate now and I was thinking about leaving college for a while. Do you think this would affect my chances of being hired on to a department? I dont see my degree helping me get hired anyway.… Continue

Good Things Are Happening at E-One These Days

Inside the Apparatus Industry
Story & Photos by Bob Vaccaro
E-One, one of the top five apparatus manufacturers, has weathered the storm surrounding its sale from Federal Signal 2 years ago, and it seems to be doing OK for itself these days. In fact, it’s made some big announcements in the past year. Let’s review.

At FDIC this year, E-One announced its… Continue

Is It a Full Moon?

The belief in Fate, a divine hand, or just plain bad luck is encouraged and promoted by our understanding that call volume has some association with innocuous universal truths. Friday the Thirteenth is a widely held bad luck…
Continue

On July 7, 2010, rescuers in Ohio were called to the scene of a significant structural collapse with two victims trapped. The rescuers—who came from volunteer, combination and full-time fire departments, and who had varying levels of experience and… Continue

please join our Team Zodwa Face book page, we are from South Africa and employed full time as fire fighters/EMT's and ALS Paramedic, climbing the 7 summits for charity. Team Zodwa Fire & Ice 7 summits challenge - 1 million metres of extreme mountain terrain - 1 million children - feeding 1 child - 1 metre - 1 step at a time. we are looking to have more than 1000 members by december before our next climb in Oz. We climbed Kilimanjaro last yearl;

Your guide to the terms, equipment & benefits associated with using wheel assemblies to assist with extrication procedures
Story & Photos by Les Baker

Many responders rarely consider using the wheel assembly to assist with extrication procedures. In fact, most only work with wheels if their department’s protocols involve deflating tires during stabilization. Further, many of these… Continue 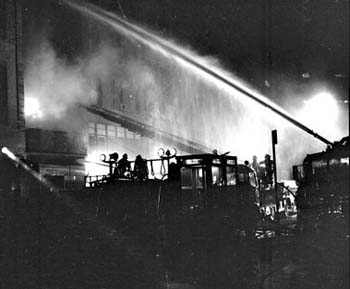 At 2136 HRS on Oct. 17, units responded to a fire in a four-story structure at 7 E. 22nd St. The location housed an art dealer who reportedly stored highly flammable paint and lacquer in the building’s cellar where the fire originated. All photos courtesy…

On Oct. 16, 1967, the Cardinal Lanes Bowling Alley, located at 515 Anderson Ave. in Cliffside Park, N.J., was involved in a fire. Several crews from neighboring towns responded to the blaze, including five firefighters from the Ridgefield Volunteer Fire Department, which was called on mutual aid. Several firefighters entered the building that day; tragically, the responding crew of volunteers never made it back out.

More for Their Money: If we expect a pay raise, we have to do more than just show up when called

More for Their MoneyIf we expect a pay raise, we have to do more than just show up when called
By Scott Cook

Last Thursday, a young mane, Alec Catherwood, was killed in action while serving for our country in Afghanistan. He will be dearly missed and greived by many. Alec was only 19 and a volunteer fireman. please pray for his family for they are taking this very hard. Please pray for his Fiance as she will be haveing a very hard time coming for her. please pray for our community as we are hurting badly right now, alec was a very big party of his community, he always had a smile on…

So my Fiancé and I are planning on doing a FIREFIGHTER THEME Wedding since we are both Firefighters. We are open to any ideas some fellow firefighters on here may have...such as what 2 colors we should do, ect. So feel free to post any suggestions you have, we would both appreciate it VERY MUCH!

Editor's Note: This article originally ran in the July 2007 issue of FireRescue magazine.

There are many benefits to performing lifts that… Continue

It is “interesting” that in discussions about this weekend’s four alarm fire in Lowell, that the Fire Chief and the Mayor were mum on the rolling brown out issue. Wouldn’t the right thing for Hizhonor and Da Chief to do would be to point out that budget reductions have forced cuts in staffing? And that those reductions in staffing have resulted in companies being closed. And that if those companies were not closed nine more firefighters… Continue

woohoo 15 days till we leave for the L.A

can anyone tell me what the weather should be like in san diego san francisco and vegas in november .

On Aug. 17, six teenagers were hiking in a canyon in the Olympic National Forest in Washington state—specifically, an area that had been closed to the public due to its hazardous terrain—when their expedition took a scary turn. The subsequent rescue… Continue

Howard County, Md., has seen significant growth in the last several years. As a result, the Howard County Department of Fire & Rescue Services (HCDFRS) is currently going through some growing… Continue

so the end is in sight

hey guys, just thought id post a little on my progress as far as my fire training academy is concerned. just earlier this evening,i took my last major exam of the program. dont have the grade on it, should have it on wednesday, but i think it went pretty well. in a little over three week, we will have our final exam, which will cover all of the second semester studies. on saturday, we had our first live fire training burn, which was really awesome, we really didnt do that much, but it was… Continue