Today’s dumbass award goes to 409 people at once!
People can just be plain stupid. Computer specialist Didier Stevens put up a simple text ad on the internet offering downloads of a computer virus for people who did not have any. Surprisingly, he found as many as 409 people clicking on the ad saying “Is your PC virus-free? Get it infected here!” during a 6-month campaign on Google. There was no actual virus involved - just proving a point.

This was taken from KCMQ (a local radio… Continue

So today i took my fire dept agility test for the jackson fire dept and i passed...im over halfway there to gettin hired.i hope i get it!! theyre hiring around july 1st

HAVEING A BIRTHDAY IN JUNE,

What a day to write Notes from a Rookie Firefighter! Today I went to a drill and for the first time wore a mask with my hood over the front of my face. At first I admit I was hot and nervous, but then my mentor and one of the young firefighters showed me the proper way to put on the mask, and how to feel the suction to see if it's on correctly. For a woman fitting into men's gear, it can be tough at times, but the proper placement of your mask is so important.

I have not been on in a while. My laptop crashed. And if any of you have growing boys then you will understand all of my money seems to be going to food and shoes for their growing feet!! I can't believe I am the mother of a teenager and now my baby just turned 10! So....I bought a new laptop yesterday and am good to go. Woo Hoo

Just to update...my custody case is still going on. I am hopeing that we will have it finalized by next week. I am having to go to part time status to have… Continue

last week of May

This week has been the busiest of weeks, plenty of calls, today alone 2 calls a real heart stopper this am at the local nursing home, turned out they either didn't notify the alarm company or the alarm company forgot they were having a fire drill, comes in as unknown type fire, pretty exciting for a few seconds anyway. Structure fire in the afternoon in the south end of the district we were second out for that call, there are some issues with that station that we need to address at the next… Continue

Well all I am aboout to embark on my first 24 hour Medic shift. Our department runs the medics on a 12 hour shift except on weekends when they have openings for day shift medics to work extra hours. One of our Captains called and asked if I would be able to do a 24 this Sunday and I said yes. So we will see how this works Yippppeeeeee.
I will post more on Monday after the shift.

Before Hurricane Katrina many of us watched the hurricane season. Many didn't think it would affect them. Katrina proved that a hurricane can affect all parts of the country. During Katrina I was a member of the Missouri Department of Health & Senior Services Center for Emergency Response & Terrorism. We ended up activated because of displaced persons coming into the state. Below I have reprinted the current hurricane season predication from DHS's Emergency Management and Response… Continue

Ok, thought about how unhappy i am in my current situation at my station so I put in for a transfer. My Chief wanted to know what happened to make me want to leave that station so i told him and he was very unhappy that i am being treated the way i am. I am not a crybaby nor do i enjoy tension. I absolutely hate conflict and will not tolerated being disrespected by anyone so long story short i hope to be transfered soon.
Hope everyone out there is having a less dramatic day.

Well I haven't really logged on here in a while and figured I'd give you all an update as to what's been going on. I suppose the first thing to get out of the way is work, work, work! I'm always working, (probably one of the reason why I haven't been on here in a while.) but I guess it's good since it keeps me out of trouble.

I took my Haz-Mat refresher for the year a couple weeks ago. What can I say different year.. same stuff. But it's always nice to to have Baigis as the… Continue

Hi, I am new to the fire department and am on the committee for our 100th year anniversary celebration. If anyone of you have planned or participated in such an event, I would appreciate any thoughts you may have to make ours a success. Thank you in advance, Denise Broesler. Please email to Denisebroesler@gmail.com.

After many setbacks and and finally some great forward movement by the Trustees for the Oswego Fire Protection District June 1 2008 OFPD will be swearing in 52 firefighter paramedics. I am very excited to be part of this group after being laid off for 24 months!

We are going to be in the beautiful town of Helen Georgia. For those of you who are not familiar with Helen, it is an old style German town. It has lazy river flowing ice cold water though the center of town which will be awesome during those hot days of summer. You can splash around on innertubes for hours. The Wilderness Medicine EMT upgrade course is for medical professionals and will be starting on August 18-22, 2008. Course Cost will be $600 and upon successful completion you will receive… Continue

wanting to trade shirts with a pittsburgh firefighter

I have a Hudson, OH x large shirt (new) to trade for large or x large (new) Pittsburgh PA shirt

I posted an article in a "FORUM" (see link below) this evening that I would love to get your feed back on. It's titled "Jailed New Jersey Fire Captain Remains On Duty". If you read the article, you'll find its about a decorated Fire Captain, who after spending a few days digging through the rubble of the WTC Disaster, was stopped three times for DUI. Now his job is on the line. I'm looking for your thoughts on him loosing his job. Should he loose it? If so why? Or should he keep it? And if so… Continue

POCONO SUMMIT — A home on Hunter Drive was heavily damaged on Wednesday evening when a kitchen fire spread and quickly engulfed the first floor.

"The kitchen is in the back," said Pocono Summit Fire Chief Andy Bethel.

"The back half of the first floor was engulfed when we got here and then it started coming out the front."

Firefighters were able to pour water on the fire from both the front and the back of the home and contain the fire before 7:45, less than a… Continue 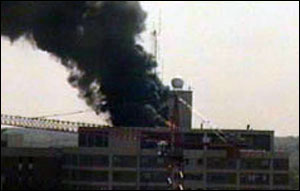 Lt. Ralph Mason told 24 Hour News 8 a pilot and a passenger, possibly an FAA official, were involved in the crash. But they managed to walk away with only minor injuries.

Floors 7-9 of the hospital were evacuated, and patients were taken from the Emergency Room.

I am soooooo sorry to all my friends. I know it has been a while since I have been on. I only have two weeks left before state boards in Columbus, plus I am finishing my clinics for Nursing and working third shift on top of all that. I have not forgotten all my friends and just wanted to say I am sorry again. As soon as this stress goes done I will be on alot more.....

So anyone going to the training in emitsberg? Let me know, i want to be able to meet some of you there!?!?!?!?!