ok so we finally had our smoke out training....
Firefighters from the city (shelbyville) came and taught us right hand search and how to do it correctly andafter a little practice we were put in groups and in we went....(They used fake smoke and it was so cool, you breathed it in and it was just like air but you couldn't see 2 feet around you) We had full gear and packs with air... in groups of 3

On April 25, 2009 an airtanker crashed killing 3. I was a hard day for me since I have been friend with the crew members of that airplane. They will be sadley missed and my prayers go out to there families. I have the 24hr preliminary report posted on my website.

Washington DC- In an effort to send a common message the USFA is working with Department of Homeland Security Office of Health Leadership and other Federal partners (FICEMS) to issue an EMS, Medical First Responder and 9-1-1 specific guidance document to the Nation’s first responders. This is a dynamic process and we will provide additional information as soon as we receive the appropriate agency(s) approval. In addition to the CDC… Continue

To Swine or not to Swine..

Yesterday my son's school called for me to come and get him. His temp was 101.5 by forehead, he was throwing up and complaining of aches. My son doesn't complain. Especially since T-ball practice is this week.
So, off we went to the Pediatrician. He has a viral infection. No, we do not test for Swine flu. yes, he has all the symptoms, but we do not test for Swine, just the CDC does that, and we'd have to wait for them to show up, and he'd be hospitalized, blah… Continue

Its been some time since I've rambled on about nothing here, so while dinner finishes cooking, I'll see what comes to mind.
Seem to be getting into a routine now that warmer weather is here. It's definitely here, too. Went to the races this past weekend and got COOKED! The week seems to play out like this: Firehouse on Monday, Billy's on Tuesday for Woofie night (Get caught up with friends and play with the dogs). Wednesday is whatever I haven't gotten done yet, chores, cleaning, surfing… Continue

The IAFC has issued the findings of an expert panel convened by the organization through the IAFC Safety, Health and Survival Section. The panel found a recently released report challenging cancer presumption laws for firefighters used flawed research methodology that produce predetermined outcomes.

My profession is somewhat unique in comparison to that of the average person. At any one fixed moment in time when duty calls upon me, I am prepared to sacrifice my own life to save the lives of others I may not even know. I am willing to do this because I understand that we all make choices in life. As for myself, this is the choice and path of service that I have chosen to follow. Though my job is often rewarding, it can also be unsettling.

I often reflect upon the simplicity of… Continue

Through the eyes of a Firefighter

Through these eyes I have seen the miracle of birth and also the tragedies of death.

Through these eyes I have seen the path of destruction that a fire leaves behind. And also the rebuilding of the damage it has caused.

Through these eyes I have seen the crumbled metal of a car accident and also the untouched body that sometimes comes walking out.

Through these eyes I have seen the sadness of loved ones that helplessly stand by watching. And also the excitement… Continue

Swine Flu: What you need to know from JEMS and FireRescue

Editor's note: With the first U.S. death from swine flu confirmed today, it’s clear this issue isn’t going away soon. Our colleagues at JEMS (Journal of Emergency Medical Services) put together the following information. Take a look so you’re prepared on your next EMS run.

Protect Yourself and Your Patients from Swine Flu
By Jennifer Berry, Senior Editor, JEMS/jems.com

With the number of confirmed swine flu cases growing in North America,… Continue

A book you should read

I met Donald Noss Jr, author of Fire Faceoff, right here in the pages of FFN.

It is the story of a fire that swept through his apartment building late at night.

You can find out more by searching his name here to see his page or read the review at Happy Medic Head Quarters.

I have no association and make no profit from recommending this book, I just think responders should read… Continue

Band On The Run

Aside from the wildfires that keep seeming to happen when I'm not home, I've had a quiet couple of weeks and not a lot of time 'on the bus'. I'm sure that this week will take care of that, but in the meantime here's a story from my pre-certification days when I wore a different uniform and rode a different kind of bus. And wore glasses roughly the size of the Hubble telescope lens.

Help the Burn Foundation - Buy a poster at Fire Expo!

If you're planning on being in Harrisburg next month for the Harrisburg Fire Expo, be sure to stop by ESI Equipment's “Extrication Boulevard” Burn Foundation booth and purchase a copy of a limited-edition print to support the Burn Foundation. 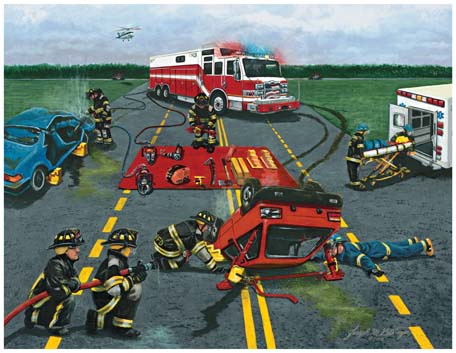 The poster is part of the inaugural Fundraiser for the Burn Foundation. The image, titled “Dogs in Action,” was created by… Continue

I would like to thank all those who took the survey but we really could use a few more responses. We have hit a wall at 44 and were shooting for 50 to 100 responses. So if you could please take the time (less than 10 min.) to take the survey it would be really appricated. It will be shut down on the seventh of May. I will try and get the results posted for those that are interested sometime in mid May.

Here is the org. post and the web link.

"The following survey is being… Continue

I am with a Volunteer Fire District Located in MID-Missouri. I am asking the FIREFIGHTER NATION if anyone has access to used Bunker Gear or wants to donate it to our Department. Items we are looking for are Boots, Gloves, Pants, Coats, Helmets. We are increasing our number of members and are running out of gear for them. Alot of our reserve gear is unuseable. So if you can help or know of anyone who can please reply. Thank you in advance for your support!!!!! 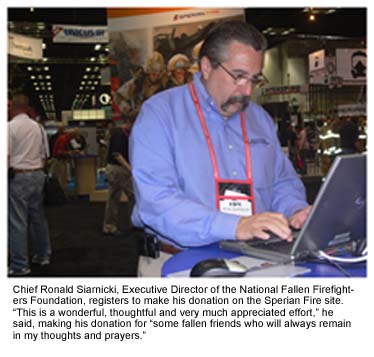 That’s a lot of cash, and what’s even cooler: Sperian is making the donation… Continue

I am 19 years old and I am red/green color blind. Now i can tell the difference between colors but shades of color is what gets me. I just wanted to know if this is going to hurt my chances becoming a firefighter before i pay for college courses. Any answers would help me very much, thanks.

FDIC Exhibits: If you missed these products, you might be sorry

Everyone knows the drill when it comes to FDIC: Firefighters en masse converge on Indianapolis for a week of activities focused solely on the fire service. Those who’ve never been before may feel as if they’ve embarked on a firefighter spring break of sorts, especially if the weather’s good. Those returning may feel like Norm on an episode of “Cheers.”

But the intent of any fire-service-related convention is to inform, educate and improve. Therefore, being an exhibitor myself, I… Continue