It's Day-FIVE since Last Saturday on that fateful day Sept. 26, 2009. Water subsided slightly. My house still flooded and with no electrical power. Unlike other areas at due east and north of our city. Water flood are gone but they are starting cleaning their community.

Relief operation still on-going and out Fire Tanker its rear tires were busted and needs for replacement. It was worned out because of rescue / relief operation since DAY - ONE, stepping on debris or rocks. Our chief… Continue

What being a Firefighter means to me

I am retired and no longer an Active Firefighter,
but I am now and always will be a Firefighter. I
am a Life Member of my Fire Company.

I will eat sleep and breathe Firefighting until the
day I am called home to the Lord. I can no longer
offer my services, due to poor health, but I can and
will offer an opinion or advice where I can.

I have fought everything the Fire Service has had
to offer during my time as an Active Firefighter,… Continue

A US Firefighter visit to the Chinese Fire Service 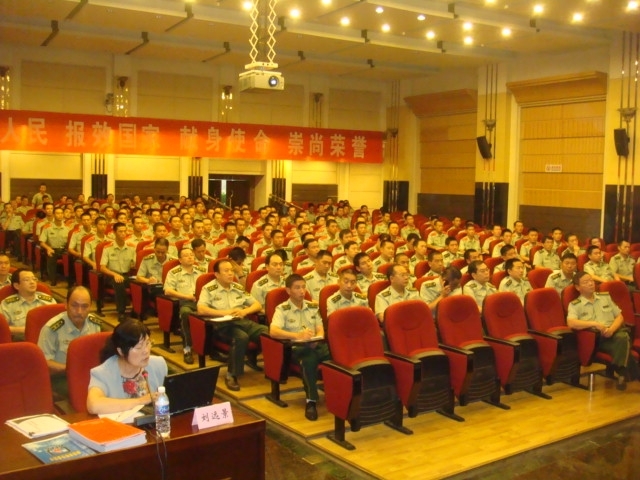 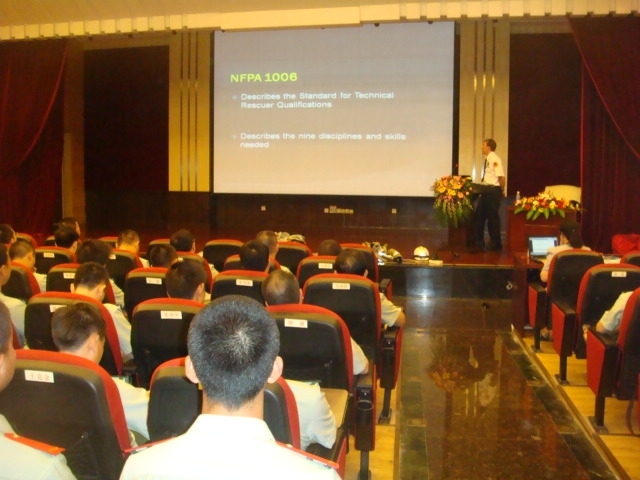 I was fortunate to recently go to China and get an unprecedented access to the Chinese Fire Service.
Attached is a link to a Pod Cast I did for the NFPA on September 25 2009. …

I did a little detective work because a friend of mine couldn't get to the convention in Wildwood a few weeks ago and he wanted a golf shirt. Because of my work I have learned how to investigate and research using the internet and I found a way to get merchandise from the convention. I won't bore you with the details of how I found the link, but I will share it with you:…

Peter Jorgensen, the publisher of Fire Apparatus & Emergency Equipment magazine, died of cancer at his home in Tundbridge, Vt.,on Sept. 25 at age 68. Below is a remembrance by Jeff Berend, Elsevier Public Safety’s VP/Publisher.

A Fire Service Renaissance Man
The fire service is made up of many unique individuals, but none more unique than Peter Jorgensen. Whenever I'd see Pete at a conference or meeting, with his always-present bowtie and strong… Continue 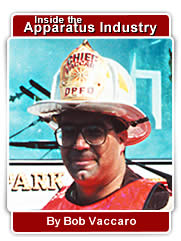 I’m sure that most of you who attended FDIC and the Harrisburg Fire Expo exhibit halls stopped by the KME booth and saw its new Force 1500 ARFF vehicle. It was definitely worth a look. At first glance it appeared quite futuristic in nature, and after taking a closer look, I can see that a lot of great engineering went into the design of this… Continue

What to Carry in Your Pockets

Often new firefighters are unaware of the things they need to carry in their pockets to do the job. Even experienced firefighters may be missing the opportunity to maximize their pocket space; I've run across firefighters who have no idea what's in their own pockets.

Ladies and gentlemen, pockets are not just hand warmers. And when you put your… Continue

From Multitasking to Task Overload 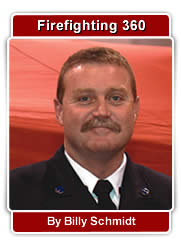 From Multitasking to Task Overload
For firefighters, the ability to do many things at once is crucial, but it’s easy to take it too far
By Billy Schmidt

Firefighting-360 (FF-360) is a continuing series of articles that takes a broad look into the concept of crew resource management (CRM) and how it can improve and enhance training and operations in the fire service. The purpose of the FF-360 column is to inform and encourage emergency responders to use a… Continue

Hey all,
My brother is on a vol. fire dept that is useing outdated bunker gear. My question to the fire fighting brother hood is does any one have extra gear for this dept before someone is seriously hurt. This is a tiny town the only money they really get is from fish fries and stuff. They have tried for a grant but get turned down. I spent 12 years on a vol. dept in Florida but not on a dept at this time. He can be reached at aliron1630@hotmail.com If any dept can help it would be… Continue

Do you realize that it has been five months since the infamous “Shot Heard ‘Round the Firehouse”? In that time, there have been 14 articles written devoted to “Examining the process of firefighting to see if there is a better and safer way to operate”. Was this an employer directed punishment, an adult version of writing “I will not be… Continue

I joined because of my son all are kids ware out of high school and we need it some think to do so we went to volunteer at station 43 on monday night ware we meet for mondy night training we have met some good freinds at the fire station over the years my best friend at northwestfiredept.

As a firefighter it is imperative that we train. However, state classes seldom fit into my schedule, and in my county, opportunities to take the classes I'm interested in are few and far between. Fortunately, I have been able to attend many classes I otherwise might have missed in recent years, by going to the annual Women Firefighters' weekend at the New York State Fire Academy in Montour Falls. This weekend was started by the Fire Service Women of New York State. This is a great organization… Continue

The new series Trauma premiering Monday night is being billed by NBC as "the first high-octane medical drama series to live exclusively in the field." The show's Website says it's "like an adrenaline shot to the heart, an intense, action-packed look at one of the most dangerous medical professions in the world: first responder paramedics." Unfortunately having had the… Continue 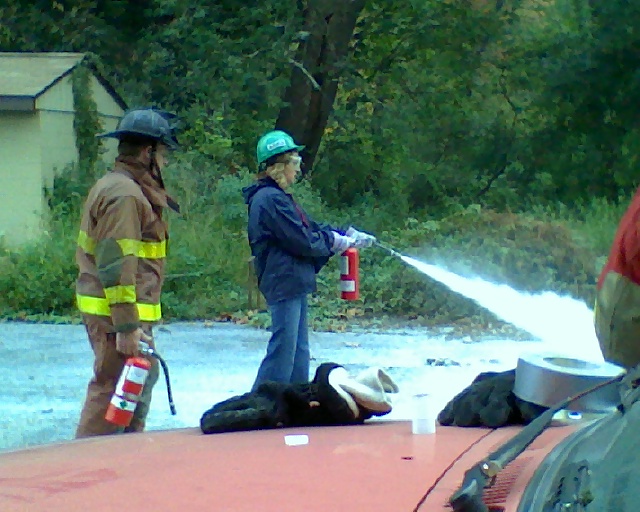 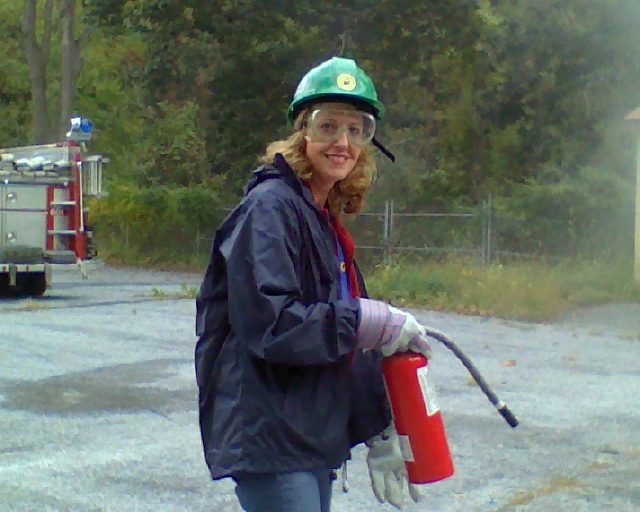 Notes from a Rookie Firefighter...September 28, 2009
Hi everyone! I had a great day yesterday at a CERT training seminar in Warren, NJ. I belong to the Office of Emergency Management and sometimes this organization and the fire department conflict. However, I had a free Saturday and thought I could benefit from any type of training offered.

I took a Disaster Triage class, a Communications… Continue

WE ARE HOME!!!!!! finally able to relax in our own lil creature comforts of home..lol we now have a home nurse here for 8 hours a day to basically watch the girls and give us a break. i had to show her how the pumps worked since i had to use them for the first time yesterday and again at 4am. everyone is doing good here and the girls are glad to be home finally. now we just have to wait on the boys to come home tomarrow

I am looking for information on cellar fires. Fire attack tactics, ventilation methods, overhauling and any other ideas, information or suggestions.

hey all we are still in akron childrens. the past three days have been insane but we were told today that we may be going home tomarrow!!!! today both jimmy and i had to be trained on how to replace an NG tube in both girls and at first it was difficult but what do ya expect when they are fighting ya know..lol anyway the nurse said we both did excellent and didn't need any help. then once the guy bringin the feed pumps left the room the nurse showed us how to operate them (they had to mark the… Continue

After nearly two decades of being on my volunteer department I’ve started noticing a frightening trend amongst our members – low attendance. And I’m not just talking about the boring and mundane weekly truck / station maintenance. I’m talking about emergency incidents and training.

The same ten or so people out of a 30-person roster keep showing up for everything, while the others seem to show up periodically. Some I haven’t seen… Continue