I am looking to move to the Lone Grove ,Ok area and what to stay on the Fire Dept. I am looking for someone in that town or around Ardmore,OK that can help me with information. Been around the fire service for 3yrs and do have my First responder. Can someone help. Thank you..

This is the link to the story on our mock accident. Trying to track down pictures to share!!!

Wondering how to improve training for non EMS responders like coaches and staff at parks and sports games.

Tonight we had an incident at a local recreation league. The kids are playing basketball and we had a 13 year old go up for a rebound and got pushed very hard and twisted upside down landing on his head.. I knew immediately that we had a situation on our hands. The child never got up from the fall..
I stabilized the neck and tried to keep his as still as possible. He had minor blood loss from the back of the head. As I was holding his head, I also put light compress on the head to control… Continue

Training Prompt: Before You Speak

Radios are perhaps the most important tool we have, and each firefighter should have one.
But, not every firefighter knows how to talk on one. 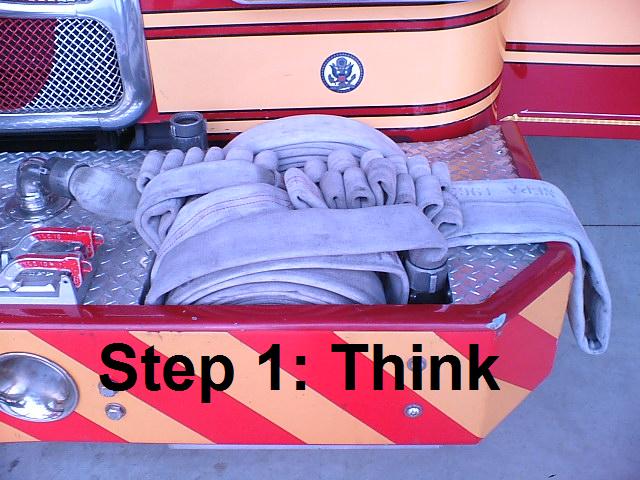 Everyone, officer and firefighter alike, should know the basics of an initial radio report by the first arriving company. Most departments have a detailed order or SOP stating what is to be said. Some even… Continue

Why Cant we as Firefighters GET IT!!!!!!

As a State Advocate for the Everyone Goes Home program I was asked by a department and a good friend to come speak during the 2009 Fire/EMS Safety, Health and Survival Week. I was very impressed with how this department has made the steps to improve and adopt the 16 Firefighter Life Safety Initiatives. Before the presentation started my friend and fellow instructor gave me a tour of his department and we got to talking. He said that a few of his neighboring departments probably wouldn’t show up… Continue

My experience at the Tribute WTC Visitor Center in NYC

I have to start by saying that I haven’t written anything in a very, very long time. Which is strange since my job title and description is “publisher.” Sure, I’ve written plenty of emails, business plans, memos, etc., over the last few years. But it’s been a long time since I’ve written something that had real meaning to me, and something I wanted to share with others. I guess I’ve been waiting for inspiration.

This story starts with an email from Billy G, aka Chief Goldfeder. He… Continue

Things are going great in our department! Since our new management.

Hey brothers and sisters!
I'm teaching a class on foam and it's usage. I'm trying to track down a video of a large fire at what I think is a refinery. In the video, A firefighter accidently slips off a pipe and breaks the foam seal on a large pit of fuel, which then ignites. The firefighter goes under the water/fuel and then is able to scramble out of the pit.
I think the video is about 15-20 years old.
Any help would be appreciated.
Thanx, and stay safe.

I am going in the morning for a PET SCan tumor markers are sky high I hope that it's nothing been doing good for 8 months now since last chemo treatment. Youn know cancer is very unpredictable and you just never know what else it will do.But I can say I am trying to stay upbeat and get in the frame of mind to battle it again if need be.I am not a quiter and I haven't given into it but you are human and it does worry you. Even when you have bad days or get bad news it's not the end and if you… Continue

Mock Crash was a success

Our mock went very well. All aside from careflight being late... They weren't on a run, we just couldn't get in contact! Stuff happens! In any case turn out was really good and I'll post a link when the newspaper posts the article online! Should be tomorrow sometime...

Anyone That Lives In Georgia Or Hunts For Old Fire Apparatus?

I am trying to find a old fire unit that belonged to the Ambrose Fire Department in Coffee County.
Its a 1967 Ford F500 4x4 open cab brush and rescue combo built by the Young Fire Apparatus Company. The unit has bench seating where a hose bed would be.
The unit was built for the Allentown Road Volunteer Fire Dept and used by the department from 1967 until 1971 and sold to a fire dept in Pennsylvania which later sold the unit to Ambrose. I have heard that the unit was put out of… Continue

Does anyone have a Firemans Ball anymore. If you do what do you think of it.

In June of 2009, the line of duty death investigations of four persons was published. Each had a cause of death attributed to cardiac failure. These four deaths should cause leaders and individuals in the fire service to face two powerful medical implications:

1. To provide quality staffing departments have to ensure that its members are routinely undergoing medical and physical… Continue

Be prepared for heat emergencies

with temperatures topping 90-95% in Indiana I have noticed that the run volume has increased dramatically for heat related emergencies. As firefighters we need to take extra precautions during extremely hot days so that we don't become a victem ourselves.

Take some preventative measures and make sure that you stay well hydrated. Drink plenty of water throughout the day.

On scene make sure you check the tough guy attitude and visit rehab frequently. I've seen many guys… Continue

I know this may sound trivial but my department needs to implement an Auxiliary membership status. I am at a loss for how to write it into our Constitution. Is there anyone that could help me? That is the only section that I need right now. I would be extremely grateful for any help my FFN family provides me!!! Thanks so much in advance, be careful and stay safe!!!~Tammy~

It sad to think that we all risk ourselves each time we gear up and roll out to a call. Half the timesome nonsense has been said or has been floating around for sometime now. The good old boy mentalty has to go. We lose good fire personal because of it.I mean if I cant trst you to speak you mind tome can I trust you to watch my back?Each of us followed our hearts learned sweated and stuggled to get were we are now. Cant we bond like it was in days gone by. I think we can. So tere it is tell me… Continue

A Nashville Police Officer was shot today around 1:30p.m. CDT on Interstate 40 in Nashville. Sgt. Mark Chesnutt was shot 4 times after making a vehicle stop.

The suspect shot the officer while he was on his computer entering the suspects info. The suspect was captured a short time later and has been identified as a prison escapee from Mississippi.

Sgt. Chesnutt was taken to Vanderbilt Trauma Center where he underwent surgery and is in serious condition at this time. He was… Continue

Ok the story goes like this...We had a trailer fire Monday morning the 15Th at 4:30, well on the way there was reports of trapped animals. We had a crew go in on the back door and right when the walked in there were dead animals in the door way. When they went in a little more one of our female FF's spotted a dog on the floor still moving. She picked it up and it was still breathing, so she came out and put a nonrebreather on it and later it started breathing on it's own. Well come to find out… Continue