Well North East had a pretty good MVA today, at rt.40 and 273 intersection. Took one pt. to Christiana for trauma and one to Union with minor injuries. Wanted to fly the one pt. to a trauma center but by the time we thought of that it would have been quicker to take her to christinana by land, then to call and wait for aviation. We also got called to assist Singerly Fire Co. in their working house fire but I had to leave for work. So dunno how that went. I beleive that is all…

some funny things i have done :D

Many people don’t like to admit there mistakes, I just like the show off my funny mistakes so others can do that same one day in the future.

Not the kind of duty you want to have... 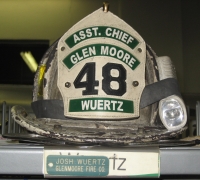 Been busy, but I wanted to post this. There are many duties that a fire police officer has to perform, but funeral duty is not one of the best, especially for the passing of a brother or sister in the fire service.

Last week, we were called upon to do traffic control at the funeral of the Assistant Chief at a neighboring company. Even sadder was the fact that Josh Wuertz, who served with the Glen… Continue

Thoughts to get you through the day.

Sometimes people come into your life
and you know right away that they were
meant to be there... to serve some
sort of purpose, teach you a lesson or
help figure out who you are or who you
want to become. You never know who
these people may be but when you look
eyes with them, you know that every
moment that you are with them,…

Firefighter and his family in need of some prayer!


I am a new one to the fire service and love it greatly. But im sending this out just because My family and I need some prayer. Setting around the house today and my radio goes off and we get a call for a 23 year old male not breathing. We go and do our thing but it was D.O.A. All firefighter/EMTs know how that goes. But this call was one I could've done without. In that house laid the body of my cousin. Little did I know that. Our firefighters/EMT's went in… Continue

just another day in paradise !!!

I have come to realise that there is and will always be stupid people out there that dont give a crap about others around there. People that have no disregard for human life or women and men who unfortunately beat their children, I am only saying this because WE are the ones who arrive to clean up the mess and try to fix what we can at that time.... but even in all of this termoil there is that ONE person that does care and that bistander that helps when they dont actually have to but they DO… Continue

Posted by Susan Oppat and Amanda Hamon | The Ann Arbor News January 26, 2008 14:22PM Categories: Traffic A 23-year-old emergency medical technician who stopped to help one driver whose car had spun off the road was hit and killed this morning by another vehicle that police say was traveling too fast for road conditions. Cheryl Kiefer, of Brooklyn, was unconscious during the 25-30 minutes officials estimate it took firefighters to free her from the wreckage on eastbound I-94 at Kalmbach Road… Continue

In Memory of Cameron Carter

On December 3rd, a LifeGuard helicopter was reported missing in Prince William Sound near Whittier. Onboard, Kenai resident, Cameron C. Carter was working as a highly skilled Flight Paramedic. Shortly after leaving Cordova Airport to transport a patient to Providence Hospital, the aircraft encountered adverse weather conditions and failed to report in. Following an extensive 7-day search effort, no survivors were found and it is presumed that Cameron made the…

Recent Firefighter graduation ceremonies have been accompanied by another rite
of sorts: the leader of the FDNY Vulcan Society, John Coombs, holding… Continue

LINK TO THE FULL… Continue

Why firefighters get divorced .

We are just like everyone else. We get divorced over money, infidelity, insecurity, lack of romance, married to young, "I'm tired of being your mother" and all the other reasons people in other careers get divorced. But here are some added reasons.

#1. Jealiousy- It can be very hard when your spouse hates their job and the people they work with. They hate to get up and go to work while you happily bounce off to do the job you…

Congrats and Thanks to Clarence Center

My wife and I enjoyed our night out this last weekend at Clarence Center Volunter Fire Company's 2008 Installation Dinner. Thanks for the invitation to join in your celebration. Congradulations to all of you at Clarence Center for reaching your 100 year anniversary. Here's hoping you celebrate another 100 years in the future!

As you are aware, Technician (Firefighter) Kyle Wilson of the Prince William County (VA) Department of Fire & Rescue was killed in the Line of Duty when he heroically gave his life at a single family dwelling fire on April 16,
2007. Below are links to all sections of the report…
Continue

You stay up for 12 hours

He's chilled to the bone, hasn't eaten all day, has the flu, and then
runs out to another call

You drink your…
Continue

you know you are a fireman if

1. You can tell what type of fire it is by the smell of smoke 5 miles away.

2. You lay out your clothes from that day so if there is a call at night you can find them quickly.

3. You have ever been airborne without an aircraft and water was your thrust.

Just looking for some friends to chat with and share stories, feel free to add!!! Thnaks!! Gene

Words can NOT describe what this kid did!!!

anything that will help out

I just signed up for a vol fire fighter and just went though my first fire truck and i need to learn what and all is in a fire truck,Can anyone help

Not sure how this transfers to structures but here's a new one ..

YOU ARE MORE THAN A COP OR A FIREFIGHTER!