I have been trying to write this up for about three weeks now, and I even tried writing another blog to get my head geared toward writing this one. Earlier this month my dad had a massive heart attack and he almost died. He is 52 and has been trying to get into better health here lately but it caught up with him. The say he will make a full recovery and with cardiac therapy should be able to do everything he was doing before the heart attack, but his days of packing up and leading an…

God works through the hands of Firefighters every day.

As Easter rolls around again I am reminded of a call that nearly cost me my job. Years ago just days after Easter my crew was called to a difficulty breathing call. Yeah that was all the information we got as was the situation many times. Not that dispatch didn’t want us to have more information; sometimes a little info was all they could gather.

We arrived emergent at a nice suburban home and were greeted by a near hysterical mother and a somewhat calm dad. They quickly…

Healthy Eating Rules for the Firehouse

What do you need for survival?  I’m not talking about your phone, technology or a certain person; I mean what does your body need to survive?  If you said food you would be correct… the single most important thing you need to focus on at that point is what to eat.…

I saw these videos today Must see Videos and it got me thinking of the good old days on the streets. I remember people screaming at us when we blocked traffic on surface streets and even worse language when on the Interstate. We block lanes of traffic not so we can hide behind the fire…

How Do Emergency Responders Cope with Addiction?

It sneaks up on you.

Now compared to my father, my grandfather, and a good portion of the people on here I haven't been in the fire service very long. Five years officially this fall.SoI have been around just long enough to start forming opinions, and  whether they be right or not depends on who I agree or disagree with. When I joined I was 21 kept my mouth shut and trained and learned everything I could. All while taking over the family business which just made it even funner. Over the last five years I have…

“YOU CAN’T HANDLE THE TRUTH” on Backstep Firefighter

In this classic scene from ‘A Few Good Men’, Danny Kaffee is questioning Lt. Col Nathan Jessop about the use of a ‘Code Red’ that resulted in the death of a Marine. Colonel Jessop’s…

As we look at the evolution of training in the fire service, we must realize that we are at a time like never before experienced. Today there is the availability of information at a moment’s notice. Fires occur and are on YouTube before the companies finish making up. There are…

Fallen Heroes FD/MC is looking for serious firefighter/riders who want to help other firefighters in need.We are dedicated to helping in any way possible for those that are in need.Firefighters with 10 years or more are only required to prospect for 1 month to show us if you really mean to join.Those with less than 10 will prospect for a 4 month period,with the ability to get patched early if you show us sincerity.No…

Being a couple on the fire dept. 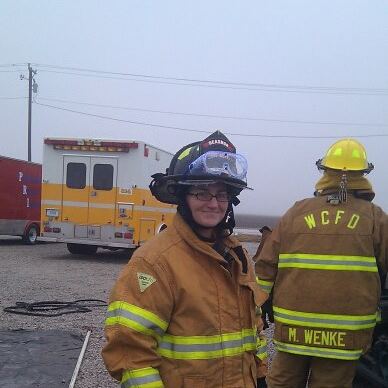 I don't know how many of you have a family member on the dept with you but my significant other, I got crap for calling her a spouse at this point but she is to me, and I are on the same dept. I have been for 13 yrs, she has been since November. It is so incredibly awesome to be able to do this together, to see her excitement, to watch her learn and go outside her comfort…

Sweetheart on the fire ground

Chris Tool
You and your spouse on the fire department together, page at 2:10 am for house fire, both going to the call and seeing her excitement of the call, Priceless!! I remember those days. "Sweetheart" on the fire ground.

So yesterday I stopped by a coffee shop owned by another retired Firefighter my buddy Eric. Eric I don’t think started off wanting to own a coffee shop, he just hated fire house coffee.

Firefighters for the most part are really cheap when it comes to pitching in on shared expenses at the station. So the cost of stuff like coffee, creamer, anything we deem a “staple” is split evenly across all firefighters.

Eric hated cheap coffee and cheap cigars so he began…

For over 11 years firefighters, who volunteer at their credit unions as directors or committee members, have been meeting annually to network and discuss best business practices with each other. If you, or you know someone that fits this description, please check out our website www.ncofcu.org

What One Important Thing?

If you could go back 5, 10, or 20 years in your fire service career, what's the one important thing you would tell yourself?