YOUR SICK SENSE OF HUMOR 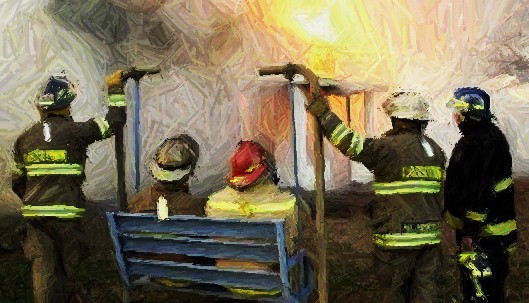 Fire Chiefs exwife's house lol (that's funny I don't care who you are).

A few years back we responded to working fire in an older brick mansion that had been converted into a business. It was a good fire (notice what we as firefighters call good). Fire was blowing out several of its windows. After we had the multiple alarm fire contained we gathered in the parking lot behind the smoking ruins and swapped war stories. Because it was a multiple alarm it brought together a bunch of fire companies that normally don’t work together, which prompted a lot of bantering and ass grabbing. We were unaware the business owner was also in the parking lot with us. So as he watched his life’s work go up in smoke. It appeared to him we were celebrating. He chewed us out as he walked by in tears.

It prompted me to write the following poem. Gallows Humor. I guess back in the day the people sent to die in the Gallows developed a rather sick sense of humor to deal with their situation. In the Fire service we have similar way of dealing. Most people would not or could not understand our “Sick sense of humor”. Ever heard the terms “D.R.T”, F.U.B.A.R” or “Crispy Critter” used. These terms may sound sick and twisted to describe a tragic situation. But it helps us avoid some of the terrible mental pictures of what we see by turning them into a cartoon of sorts. How about the times when you, or one of your coworkers, had a close a call or suffered an injury. Once you knew they were going to be okay they quickly get saddled with a new nickname. Break a toe now you’re known as Camel toes. Strain your back, you have cheap parts or “will do anything to get some time off”. Fall through a floor “lose some weight Fat ass”.

You get the picture. Make no mistake about it. The fear of a career ending or debilitating injury or the thoughts of what would happen to our families if we died in the line of duty are waiting patiently in line with the vivid mental pictures of the dead and dying and the horrific injuries we have witnessed. Waiting patiently for their turn to sneak into our thoughts when we least expect it. It is part of the burden we bare for doing the job we love. But let’s at least try to remember that civilians don’t understand it. So behave, because you never know whose watching.

In the burning ruins where
someone’s house had been

Seeing our own loved ones
In a strangers hurting eyes

If we seem insensitive
It’s not what it appears

Sometimes we need to joke around
to hold back our own tears.

Comment by Lil' Rookie on May 14, 2008 at 2:14am
here is the caption to go with the picture above... "Fire Chief's Ex-Wife House Catches Fire. Chief quoted as saying "well, she has a restraining order against me and all my family and us guys at the fire house are just one big family."

Comment by Chasefire on May 13, 2008 at 6:08am
FASNY- You see me kissing the puppy don't ya. I can be sensitive : ) thanks for stopping by and commenting

I think the Earth just skidded off its axis....

Comment by Chasefire on May 12, 2008 at 6:12pm
Rescuefrog- Post away and thanks for stopping by and commenting. Be safe

Comment by Rescuefrog on May 12, 2008 at 5:28pm
I agree with you all. With out a sick sense of humor most would not survive what we do. I know on the dive team we used to go for cheese pizza after a body recovery. Something about the cheese and skin falling off (guess you have to be there).

Chasefire if your not on firelink, may I had your poem to post there? I will give you full credit.

Comment by lutan1 on May 12, 2008 at 5:18pm
It's a good comment about what makes agood fire- I used to get an arse reamjing from parents and other family when I described what makes a good MVA (The more trapped, the harder the extrication, the more carnage- the better! Isn't it???), but after 13 years doing rescue you did harden and the humour is a protective measure....