Caveat: I'm employed by BullEx Digital Safety. This post is not intended to promote the company's products or financial interests. I just think it's pretty cool when your own company takes its employees for a full day of firefighter training to better familiarize them with the products and services they represent.

When CEO Ryan O’Donnell unexpectedly pulled the entire Sales and Marketing team into the conference room at BullEx headquarters in the middle of a work day in October, the buzz, already palpable, escalated when the team spotted the firefighting helmets and other turnout gear in the room. Comments ranged from “What’s going on?” to “Who gets to be the firefighter?”

As it turned out, that second comment ended up being a pretty good guess. “How does everyone feel about getting some hands-on experience using our training products?” asked O’Donnell. “We’re putting together a one-day training program taken straight from the Firefighter 1 curriculum and we’re going to spend that time training to perform a coordinated fire attack with search and rescue at an actual fire training facility.” There were mixed reactions from the employees as the announcement sunk in; some trepidation was evident on the faces of the non-firefighters. O’Donnell immediately put everyone at ease by explaining that there would be a healthy mix of classroom and hands-on training, and that while he hoped everyone would test their boundaries, no one would be expected to participate in any activity that they were not comfortable doing. O’Donnell further elaborated, “Safety on the training ground and on the fireground is paramount, and we will be conducting these exercises with personal and team safety as our number one priority.” 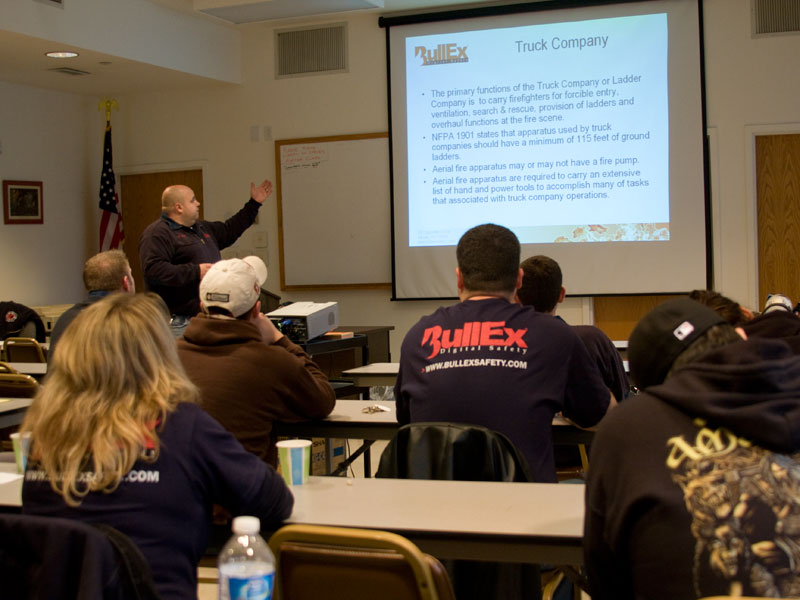 There is a strong culture of support for the firefighting industry in the BullEx offices. Besides designing and building fire extinguisher and other specialized training products for a broad spectrum of organizations and businesses, BullEx manufactures training products specific to firefighter and first responder training. Coincidentally or not, BullEx employs a handful of volunteer firefighters; among them, Chief (Executive Officer) Ryan O’Donnell. He has years of experience in the fire service where he was a decorated chief officer responsible for developing fire prevention programs, overseeing training operations as well as acting as incident commander at emergency scenes.

The BullEx sales representatives are familiar with firefighting operations as they pertain to the BullEx products, but Ryan O’Donnell felt it was time for the team to strengthen their knowledge of the products they talk about every day with hands-on training in a realistic emergency scenario. At 7:30 a.m. on Oct. 23rd, 2010, the BullEx team descended on the fire training center to begin their Firefighter 1 Bootcamp. The training topics and hands-on exercises would be covered in a mere nine hours and would cover a comprehensive range of topics:

All of which would culminate in a coordinated fire attack evolution during which the combined learned skills would be put to the test. Teams would be assigned to fire suppression, search and rescue, and ventilation. That’s a daunting task for any Firefighter 1 recruit, and this team of newbies was going to face this unprecedented corporate challenge in ways they could not possibly have imagined.

The first order of business was to split the group into Battalions. In the interest of leveling the playing field, no Battalion was staffed with more than one volunteer firefighter. Safety measures were reviewed with the assembled employees by the team of instructors led by CEO O’Donnell. The instructors, all BullEx employees and long-time volunteer firefighters, included Director of Training Josh Lare, Sales Manager Anthony Ruggiero, and Sales Team members Grant Roberts, John Prescott and CJ Heinbach.

After receiving instruction on fire department structure and command, and the elements of Personal Protective Equipment and an SCBA, the Battalions gathered in a nearby classroom for donning and doffing drills with firefighter turnout gear. 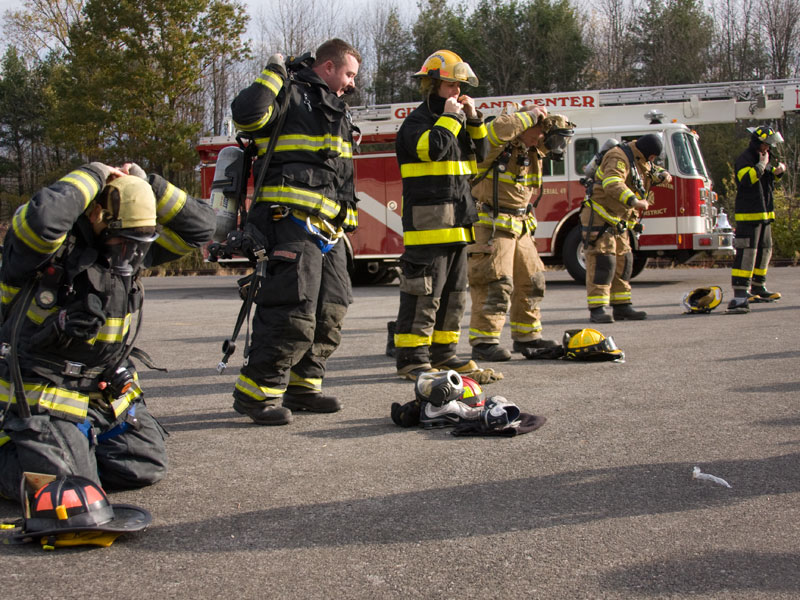 With the trainees feeling more comfortable in the bulky attire, they returned to the classroom for Search and Rescue instruction. Meanwhile, the other instructors were setting up the multi-story training tower for the hands-on search evolution. A BullEx Smoke Generator was placed on the second floor and another on the third floor.

As the Battalions gathered outside of the training tower, the Smoke Generators were started and in moments the second floor was set up with light smoke for Search and Rescue without victims, while on the third floor, zero visibility was maintained with thick, billowing smoke and BullEx SmartDummy rescue manikins were strategically placed throughout the second floor, awaiting retrieval. The first floor was used as a no-smoke space for basic search skills training.

One by one the teams first entered the first floor to learn and practice their Right-Handed Search techniques, and after successful completion, “graduated” to the second and third floors for an adrenaline-fueled search exercise. Equipped with axes and Halligans, in teams of two they crawled through the smoke-saturated environment. On the third floor, unable to see beyond their own hands, they rose to the challenge; locating and rescuing the positioned SmartDummies and bringing them to safety. 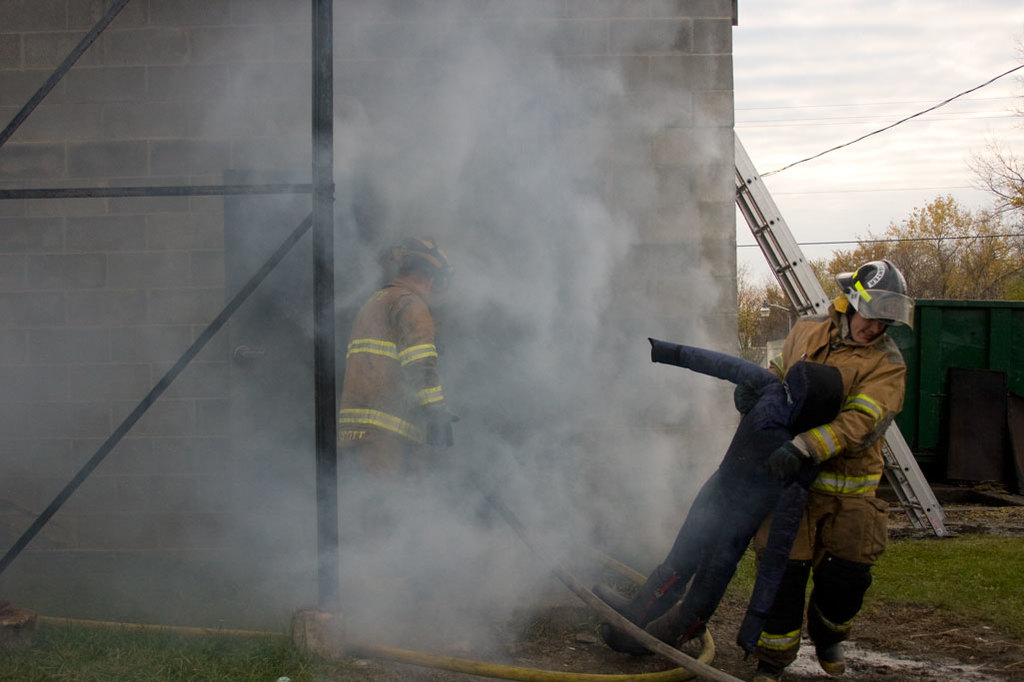 The remainder of the morning flew by as hands-on practice followed classroom instruction in hose streams, hoseline advancement and fire suppression. The BullEx Magnum live-fire training system generated a wall of flame for the trainees to garner experience with Class B foam application. One after another, each Battalion practiced various stream methods; the rain-down, roll-on and bank-down. Sales team member Kathy Plant knocked down the fire in short order, exclaiming, “Look at how I knocked down those flames with this inch and three quarter!”

After a brief lunch, the crew moved on to Vehicle Extrication, cutting apart donated vehicles with hydraulic tools, including the “Jaws of Life”. Account Executive Kristen Thatcher dispatched the side windows of a car with a window –punch and a huge smile, clearly enjoying shattering the glass. The Battalions continued on to the next evolution of throwing ladders and utilizing a hose line to practice hydraulic ventilation from the second floor window of the tower. At one point, Instructor John Prescott had to pause the Smoke Generator because the enormous volume of heavy smoke was impeding the ventilation exercise, “We had to turn down the Smoke Generator 4000 during hydraulic ventilation because the hose lines couldn’t force out the high volume of smoke that the generator was producing.” 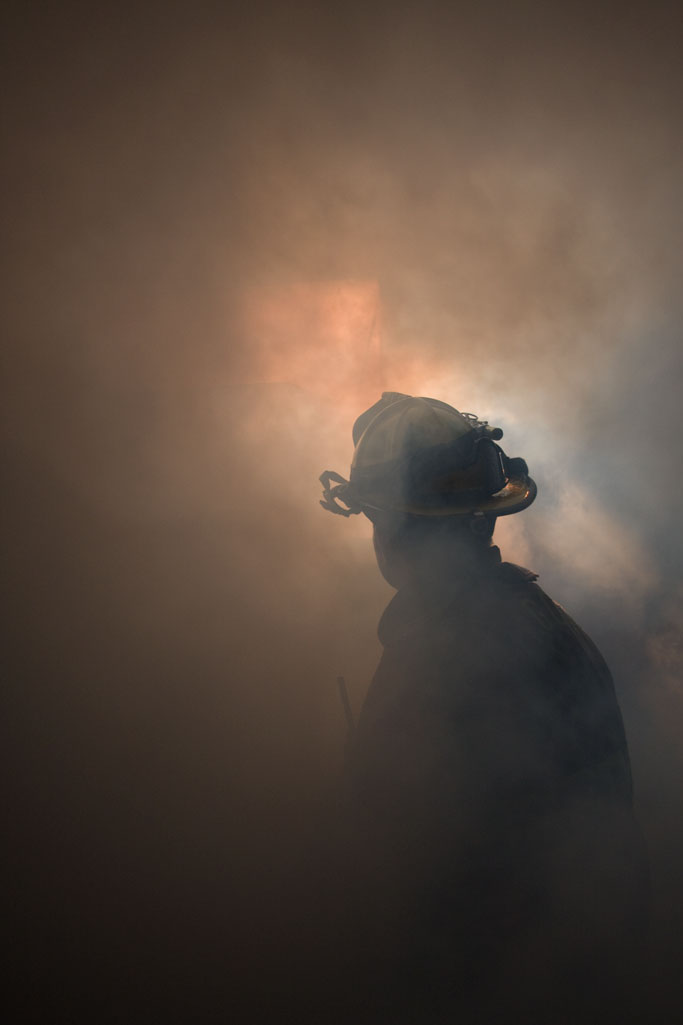 Daylight was beginning to fade as the team gathered for the final exercise of the day. They were hot, they were dirty, they were exhausted, and after a long day of back-to-back hands-on training, they felt like firefighters.

Ryan O’Donnell rallied the troops as he explained the upcoming evolution that would tie in every piece of knowledge learned. A simulated fire call would be sent out over the radios; a first alarm structure fire with the added complication of possible trapped victims. The Battalions were assigned to their duties, the tones dropped and the BullEx Sales and Marketing team shed their professional titles, donned their firefighting gear and swung into action like a well-oiled machine. Smart Dummies were rescued, hose lines were advanced, smoke was ventilated, and 25 BullEx employees discovered a new level of respect for the emergency services personnel that they talk to every day. 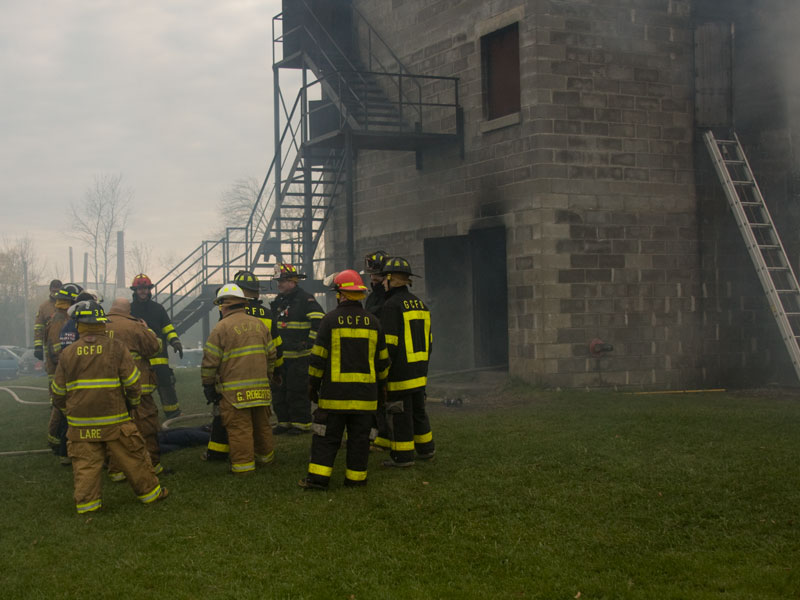 They learned a lot about each other, pushed through their own fears and formed new bonds. Thanks to the Firefighter 1 Bootcamp, the BullEx Team is walking the talk.

So what did you do on Saturday?

How important is it to you that when you talk to a salesperson you know that they have rescued a victim in heavy smoke from the third floor of a fire tower?

Comment by Mary Ellen Shea on November 22, 2010 at 8:14am
Lutan,
Thanks for the feedback! I was a fan of the BullEx product line BEFORE I was hired by them. I've been impressed from day one with their dedication to the integrity and quality of their products and to the safety of communities and firefighters.

Re: the vehicle extrication pic--I don't disagree with you, but running 20+ "never-ever's" through a full day of tactical firefighting drills and some finer points can get lost in the shuffle. Good to keep in mind for future employee FF Bootcamp exercises though!

Comment by lutan1 on November 20, 2010 at 10:29pm
As an owner of a Bullex ITS for my commercial training company, I'm a massive fan of their products.

Given the company is taking the time to actually train their staff properly, so as they can supprt me and all the other customers better, makes me an even bigger fan!


On a side note, the photo of the lady breaking the glass- she really needs to keep her mouth closed when when breaking glass- nothing worse than those micro fibres in the mouth. In fact many FD's now require the wearing of dust masks for glass operations.....

Comment by Mary Ellen Shea on November 19, 2010 at 1:26pm
Thanks for the feedback Mike. It really was a great learning tool and a good team building opportunity.
We had a blast!