During the hours that most families might be relaxing together, gathering around the television screen to watch a football game or sleeping, on Sept. 13th, the Cannavo family from Guilderland, NY allowed BullEx Digital Safety and the entire production crew from the Today Show into their home with cameras in tow to demonstrate proper home evacuation techniques in the event of a home fire.

Frank Cannavo, his wife Lisa and their children, 14 year- old Lucas and Sarina, 12, agreed to play out their unrehearsed reactions to the shrill beeping of a home fire alarm while they lay in their beds as though they had retired for the night. The family dog, Nico, was placed in his sleeping kennel in the attached garage while the family donned pajamas and proceeded to their respective bedrooms. The BullEx team, led by CEO Ryan O’Donnell, worked with Today Show producer Michele Leone and her camera crew to set up a simulated residential fire, all without striking a single match.

In the first of three fire drills, BullEx placed their demo smoke detectors, which would be activated manually, throughout the home. The team verified that the family members were situated in their beds, and turned off all the lights in the home as the news team turned on the cameras. Outside, in the front yard of the residence, Today Show host Janice Lieberman explained to the camera what was about to take place. On the street, the bright yellow fire truck “dispatched” by Guilderland Fire Department stood by, as the firefighters assembled nearby in their turnout gear under the guidance of Chief Don Gaitor.

The stage was set, the family was in place, and the cameras began rolling as the first strident tones of the fire alarm filled the air. Within seconds, 22 to be precise, the entire family, including the family pet, were gathered on the front lawn, having successfully exited the home in a timely fashion. Curious neighbors peered from the windows of their residences as this tidy community of well-maintained homes was placed squarely in the epicenter of a simulated residential fire.

Immediately after the dry run, the family returned to their beds, presumably to see if they could “better” their time. Unbeknownst to the Cannavo family, Mr. O’Donnell and the Today Show had something unexpected up their collective sleeves. Two BullEx portable smoke generators were brought inside, as a BullsEye digital fire extinguisher training system, placed to render the front door unusable as if behind a wall of fire, illuminated the scene with its digital orange glow. The smoke machines pumped dense, heavy simulated smoke throughout the home, reducing visibility to near zero in a matter of moments and triggering the hard-wired fire alarm detector in the upstairs hallway.

And then the family discovered what the production team had planned for them. The house was suffused with dense smoke.

Surprised, confused and blinded by the smoke, the family reacted much the same as the majority of people do when confronted with a real fire in the middle of the night; they panicked. Chaos reigned as mother, daughter and son attempted to navigate the stairwell leading to safety, uncertain as to each other’s location, while Frank stumbled toward the garage entry in an attempt to locate the dog and gain freedom from the smoke-saturated residence. One full minute and 48 seconds later, significantly slower than the first evacuation drill, the family reunited outside, showing visible signs of the stress levels they experienced while faced with the unexpected. Janice interviewed the family to discuss their immediate reactions to the surprise smoke scenario they discovered during the evacuation drill. The younger child, Sarina, was clearly unnerved by the experience and spoke excitedly into the camera, her eyes wide, as she talked to Janice about how scary and confusing it was to rush into the hallway only to discover that she couldn’t clearly see her way to the stairs. 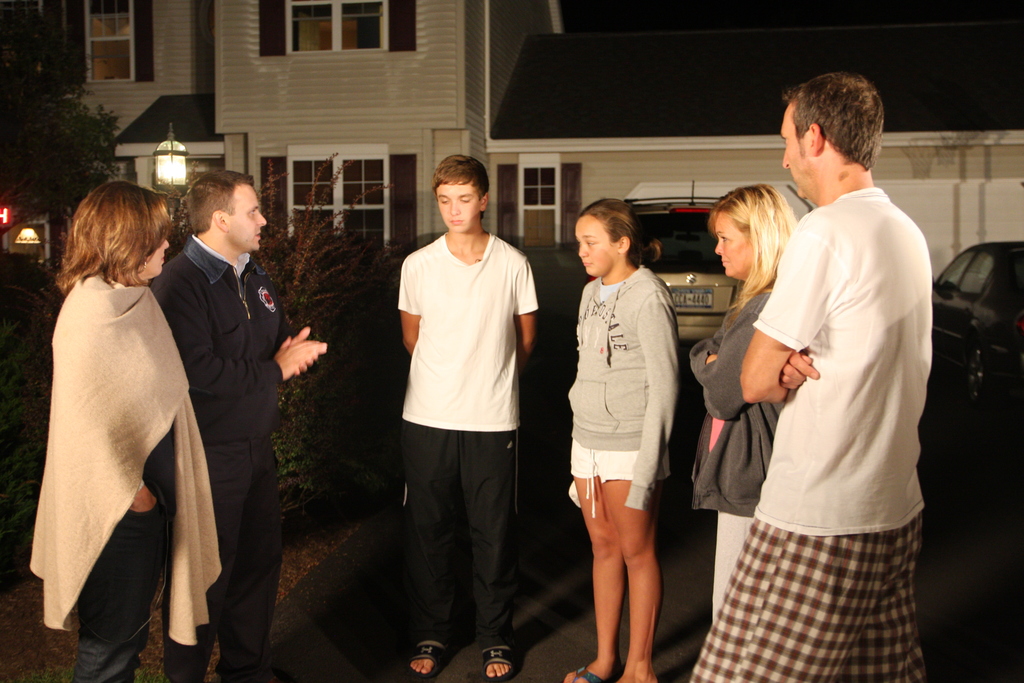 As the clock continued its march past midnight, the entire production team and the BullEx CEO gathered the family together to review evacuation techniques, including how to “get low” in a home fire, minimizing exposure to eye level smoke saturation and low-lying toxic fumes that are a natural by-product of fire. Michele proposed that Ryan O’Donnell bring the family back inside the home and demonstrate how to crawl and avoid the most harmful levels of smoke. The Cannavos watched intently as the BullEx CEO crawled along the hallway, ably practicing what he had preached only moments ago. The family then took turns navigating the stairwell practicing their “get low” stance, commenting how much easier it was to see and breathe while crouched down on floor level. 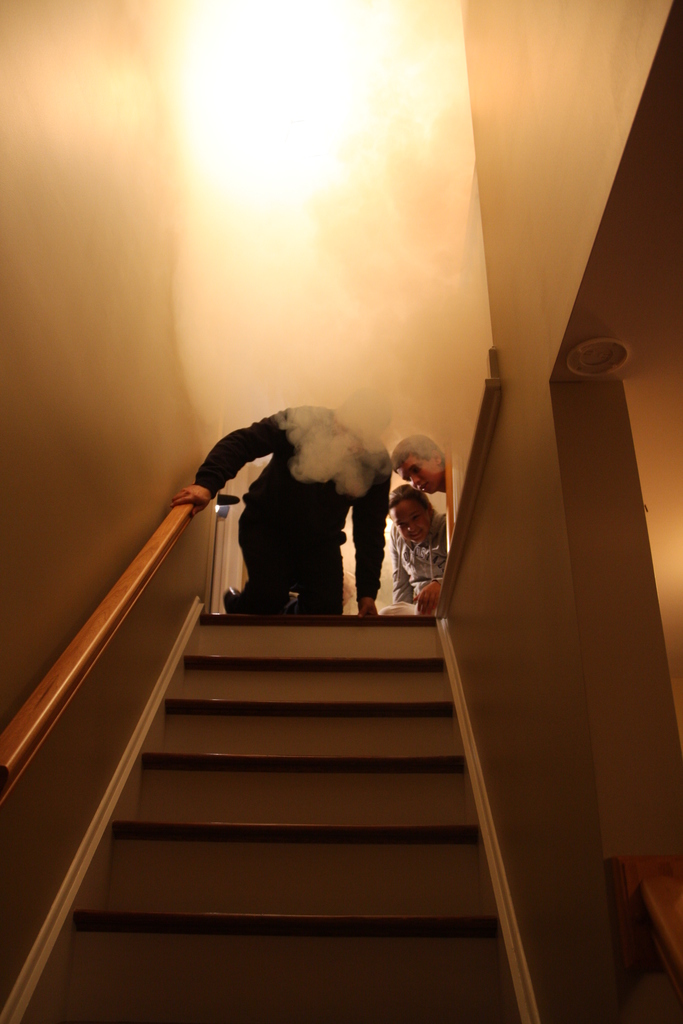 As the fire department finished ventilating the home of lingering accumulated smoke, the family once again reassembled on the front lawn. This time, they were told to create an evacuation plan, and discuss amongst themselves their plan of attack for evacuating the smoke filled environment in a timely fashion. This time, the family knew what they were up against and huddled together to discuss their tactics.

For the final evolution, the family returned to their bedrooms, Janice Lieberman and the camera team took their places, and the BullEx Smoke Generators were pressed into service. As the smoke detectors were triggered, a concerned neighbor walked over to the firefighters and said “Is there anything going on that I should be concerned about?” It was a fair question. The entire neighborhood was swathed in clouds of lingering smoke that had been ventilated from the home, and the street appeared to be staged for a Hollywood disaster movie. The family raced out of the home, gathering at their prearranged meeting spot for a head count to make sure everyone was out of the house. The timing clock was stopped at 58 seconds. Their time wasn’t as impressive as during the smoke-free drill, but clearly the “get low” strategy and evacuation plans were successful as the family shaved almost 60 seconds from their previous low visibility drill. That may not sound like much on paper, but it can literally mean the difference between life and death in a fire. Janice asked the family what they thought about their actions during the evacuation drills. Sarina replied “It’s important to get low!” Lisa Cannavo expanded on that thought and said “It’s important to have an evacuation plan in place.”

Had the Cannavo family been awoken by a smoke detector in the pre-dawn hours, and there were no television cameras, no simulated smoke and no digital fire, if their family home had indeed been engulfed in flames and thick choking smoke, would they have been prepared? Based on their performance this night, the answer, prior to practicing an E.D.I.T.H. drill, was “probably not”. But now, after experiencing a simulated fire and reviewing their plan with the BullEx and Today Show teams, the family has an evacuation plan in place that may one day save their lives. Does that apply to most families around the world? How many people actually plan and conduct evacuation drills in the home? How many know alternate means of escape if their planned route is blocked? How many are overcome by smoke before they can get to a door or window because they didn’t know to “get low”.

The Cannavos are lucky. They’ve been exposed to a very realistic fire simulation and will be better prepared if there ever is another “next time”. Fire Prevention strategies are not just for Fire Prevention Week. Review E.D.I.T.H. planning with your community. Make sure that your residents know where their fire extinguisher is and how to use it. Discuss checking and replacing the batteries on their smoke and CO detectors twice a year. Teach them how to get low and get out. Teach them the skills they need to stay alive.

Comment by Mary Ellen Shea on December 1, 2010 at 9:06am
Thanks for the feedback Bob. I agree completely. The story and photos can't adequately describe the reaction of the family when they came out of their rooms into a zero visibility environment. I think during the first evolution they felt that it was "fun and games". There was a significant difference in their demeanor when the realism was ratcheted up. I was there and saw the panic on their faces, even though they knew they were in no real danger. It was a true wakeup call for everyone involved...including the firefighters!

Comment by Bob Allard on November 30, 2010 at 4:13pm
Very good, more families should be put throught this to know how to handle themselves, a community program is a good start, maybe families that have had fires and families that have not.. This is a good drill for Fire Prevention week., I know we send kids in but a family needs to do this at thier homes.