BUFFALO, NY (April 2, 2009) -- Crooks, the millionaires club and greedy old men. Nope, these aren’t remarks about the scoundrels who have set this nation’s economy in a tailspin. Rather, they are comments being voiced by the citizens of Buffalo, NY about city’s firefighters, who find themselves defending the fact that they accepted $10 million last year in overtime.

Although I'm not a Buffalo resident, our small East… Continue

BREAKING NEWS: Career chief arrested for additional arsons. As I noted in my post about a month ago, all indications were that a firefighter was responsible for setting some of the arson fires in Coatesville, PA, Chester County. My biggest fear because a reality today. The following report is resposted with permission of WPVI-TV,… Continue

KYW-TV in Philadelphia is reporting a serious crash between two Philadelphia fire apparatus. At first it was reported that 5 firefighters were taken to the hospital, but that number has now been increased to 9.

What if you had a fire…and no one came?

They are the folks who leave behind family and home at a moment’s notice to help a neighbor or other any person in need. That’s the story of 800,000 Americans who serve as fire-rescue volunteers. Until recently, it was a story that brought pride and inspiration to 80% of the communities in this nation. But times have changed and what was once America’s greatest emergency asset is suffering from a variety of setbacks.

A generation ago, when the fire… Continue

COATESVILLE, PA (February 7, 2009) -- Since the first of the year, firefighters in this once bustling steel town have seen more work in a few short weeks, than they might have seen during their entire career. A string of arson fires, now totalling 29, have plagued the city's 12,000 residents, and the multi-agency task force investigating the blazes have no solid leads.

It's a news story that is making world headlines, and has many in the fire-rescue services sitting on the edge of… Continue

With much of the nation locked in by cold and ice, I thought it would be useful to share a quiz that deals specifically with cold weather firefighting. If you're game, here's the scenario:

It's 0212 hours and the crew of Ladder 9 have been dispatched as the 2nd due truck on a building fire. For Ladder 9's crew, this will be the 4th response of the evening, two of which were working fires. Because of the previous jobs, there's some standing water remaining in the ladder pipe and the… Continue

(Anytown, USA) -- The fire service here in the USA is extremely fortunate to employ some of the bravest firefighters and most knowledgeable fire officers in the world. But firefighting is inherently a dangerous profession, and things will and do go wroong. When a firefighter loses his or her life in a burning structure it is usually a result of unanticipated or unexpected fire development, not the inadequacies of command or even a firefighter’s… Continue

A debt is owed to all who volunteer to fight fires

This is my response to a stinging series of features recently published in the Wilmington, DE News-Journal regarding the failure of the volunteer system in the state. The News Journal writers printed a great many inaccuracies, manipulated response times and, in general, skewed their stories to place the volunteer fire service in as bad a light as possible.

Here is letter to the editor -- published as the series was being presented.

Taye was expected to be charged with manslaughter, second-degree… Continue

DELAWARE CITY, DE (December 22, 2008) -- A Delaware City (DE) Volunteer Firefighter died today of injuries she sustained after being run down by a motorist on US Route 13 at the New Castle County Airport. Firefighter Michelle Smith, 29. was assisting in the treatment of the victim of a motorcycle accident when a driver sped through the emergency scene, running over Smith and the patient.

Smith and her EMT partner were staffing the Delaware… Continue

Big Sur, CA (July 8, 2008) -- With dry winds and low humidity in store, the day doesn’t seem to be a promising one for firefighters working fires on California’s central coast. The Basin Complex fire in the Los Padres National Forest has currently destroyed 74,985 acres and is only 11 percent contained. The complex is burning away at one of the nation’s most beautiful destinations, Big… Continue

A day honoring the courageous men and women who worked on rescue, recovery and clean-up following the 9/11 attacks on the World Trade Center. A series of free events during the afternoon with a closing concert.

Sponsored by the WTC Medical Monitoring and Treatment Program in addition with labor unions, firefighters, law enforcement and community based faith groups.

In the 2005 season finale of FX's "Rescue Me," Firefighter Tommy Gavin is pictured driving along in his pick up with Jesus Christ as a passenger. For Gavin, played by actor/writer Denis Leary, JC is just one of many visions that come to him from episode to episode. Certainly not a scene from the venerable series "Emergency," but an audience pleaser nonetheless. So much so,… A Bittersweet Victory for the Family of a 9/11 Hero

During a recent Delaware incident, 7 firefighters became trapped on a 2nd floor duplex during a tough firefight. Fortunately, the firefighters were rescued by an agressive Rapid Intervention Team with just minutes to spare. Initial reports were that there was no life hazard, as occupants had been accounted for. But considering the time of day, 7:30am on a Saturday morning, Chief Chuck Hayes did what most chief officers would do -- order a… Continue

Saving Our Own
by Lou Angeli
(Wilmington, DE) – January 5, 2008 -- An early morning Delaware blaze may have turned deadly for 7 firefighters if not for mutual aid pre-planning and a superfast…
Continue


(St. Louis, MO) -- As weather experts debate the effects of El Nino on North American weather patterns, the "B" shift members of St. Louis Squad-2 don't really give a damn. Winter is on them, and the simple fact of the matter is it's getting cold. Firefighting Offers a Way Out for California's Offenders

I'm posting this story because I'm hoping to get reaction, especially from East Coast and Midwest firefighters about using prison inmates for fire-rescue work. It should prove to be controversial. I don't necessarily advocate the idea -- I only report the stories. 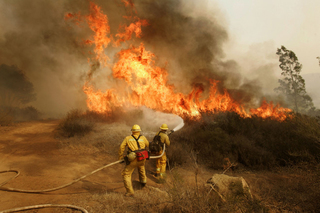 Generally ignored by the media is the fact that 4,000 of California's… Continue 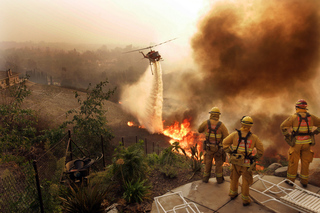 Last week I had the opportunity to cover the 2007 Firestorm from the firefighters' perspective. Over half a million acres have been burned, 3500 homes destroyed, and another 25,000 homes damaged. In all, about 30,000 firefighters from dozens of agencies fought the fires that threatened Southern California. (100…