Lewes, DE (March 27, 2012) -- I don't know where to start, but first allow me to make this personal statement. The New York Post, one of America's largest newspapers, is also its worst. It serves up yellow journalism on a daily basis and "...is best used to line the bottom of bird cages."

Yesterday, Monday March 26, 2012, The Post ran a story about a former FDNY firefighter who the paper claims faked a medical condition in order to collect a disability pension. I'll use the name Ray for the sake of this discussion. This news piece hit home because not only is the story a total fabrication of a fellow Delaware volunteer, but the venerable NY Post lifted one of my photos, that I posted here on FirefighterNation.com some 2 years ago, to illustrate a story about NASCAR safety. For the record, I never gave them permission to use the photo -- and told them NOT TO USE IT three separate recorded times.

Ray is a former FDNY firefighter who had a sterling career, so much so that officers from Rescue-1 (Manhattan) and Rescue-3 (The Bronx) fought over him. He served under Capt. Terry Hatton and learned the ropes from fellow firefighter Joey Angelini, who at 65 continued to hold an honored spot on Rescue-1's rig. But all of that came to an end on September 11, 2001. Hatton, Uncle Joe and most of Rescue-1's crew were lost to the towers that day. Ray was off, but responded from home arriving just before the north tower collapsed.

Although I'm not using the firefighter's true name, many of you will recognize him by his voice. When Jay Jonas, serving as Captain of Ladder 6 on September 11th, reported that he and his crew were trapped but alive, it was the Ray who responded by radio. "We're coming for you brother...We're coming for you." Those nine words remain one of the most chilling radio transmissions from that horrible day.

During Rescue and Recovery, Ray searched for his brothers day-in and day-out, spending many, many weeks on the pile. It was hard work but Ray was determined to bring his colleagues home. His decision to see the mission through had its ramifications though. Ray started suffering from pulmonary ailments and after poor testing results, was released from service with FDNY on disability at just 45 years of age.

Fast forward ten years: Ray, now living in downstate Delaware, became a member of his local volunteer fire company -- not so much to ride the apparatus, but to work with the department's junior members. Imagine the quality of education those kids have received!

Because of his rescue expertise, Ray was also asked to serve as a consultant to Dover International Speedway's Track Safety Crew, where he worked with NASCAR safety personnel to come up with the SOPS for the extrication of drivers. During the races, Ray drove the utility truck that carried the rescue tools. Everything about the race world is super fast, so by the time Ray would arrive, four other fast response vehicles were already on scene with a total of 16 firefighters -- enough manpower to attack a well involved room and contents fire. But Ray could only stand back and watch because there are few technical extrications in NASCAR racing these days.

It must have been a slow news day for the New York Post yesterday. Working on a single tip from an angry individual who apparently doesn't care for Ray, the newspaper ran the following headline "Disabled FDNYer with 95K Pension Now a NASCAR Rescuer." The writer was Creepy Carl, as he's known in the business, a Mr. Carl Campanile. One individual who has been following Campanile's career notes,

"Carl one time was an idealistic journalist, but after years at the Post he has become nothing but a mindless, brainless robotron who does the bidding for his master Rupert Murdoch."

The story is written in the first person narrative as if Carl knows Ray personally. In reality he's speaking for a single individual who called the paper with a tip -- aka a false allegation -- about a former member of FDNY. Campanile ran with it because it seems that whenever the opportunity arises the Post discredits firefighters (and law enforcement).

Interestingly, Campanile claims that Ray "may have received his disability...(because) he was overweight." Well, anyone who knows Ray would never describe him as overweight because he's thin as a rail. Just check out the picture that I shot -- and the Post published without my permission.

The information on Ray comes from a single source -- a whistleblower claims the journalist. Unfortunately, the whistleblower wouldn't allow the newspaper to release her/his name. Perhaps Campanile should have done a background check on his source before ripping into Ray and ruining his life.

The issue of firefighter salaries, pensions and disability benefits are currently a hot button and the press, citizens and citizens organizations love to press it. But how can anyone fault Ray?. His salary and pension were determined before he came on the job. And who could have predicted the events of 9/11 and the long term medical issues suffered by tens of thousands of responders? It was the City of New York who gave Ray his walking papers. His preference would have been to remain on the job and work into a command position in special operations.

As for any firefighter or police officer who went on disability, what does the Post and unnamed sources of information expect them to do. Sit in a wheelchair in front of the TV? Any individual, ill or healthy, should be given the opportunity to pursue a lifestyle that makes them happy, healthy and whole. That's all that Ray wants. And what better way to serve the community then by sharing his incredible knowledge of firefighting and rescue -- whether it's with the young people of Lewes Fire Company, or the Safety Crew at Dover Speedway.

Ray won't be defeated by a nameless accuser that's for sure. He's a Firefighter -- a member of the brotherhood. And if ever a brother needed a lift, Ray is the guy and today is the day. 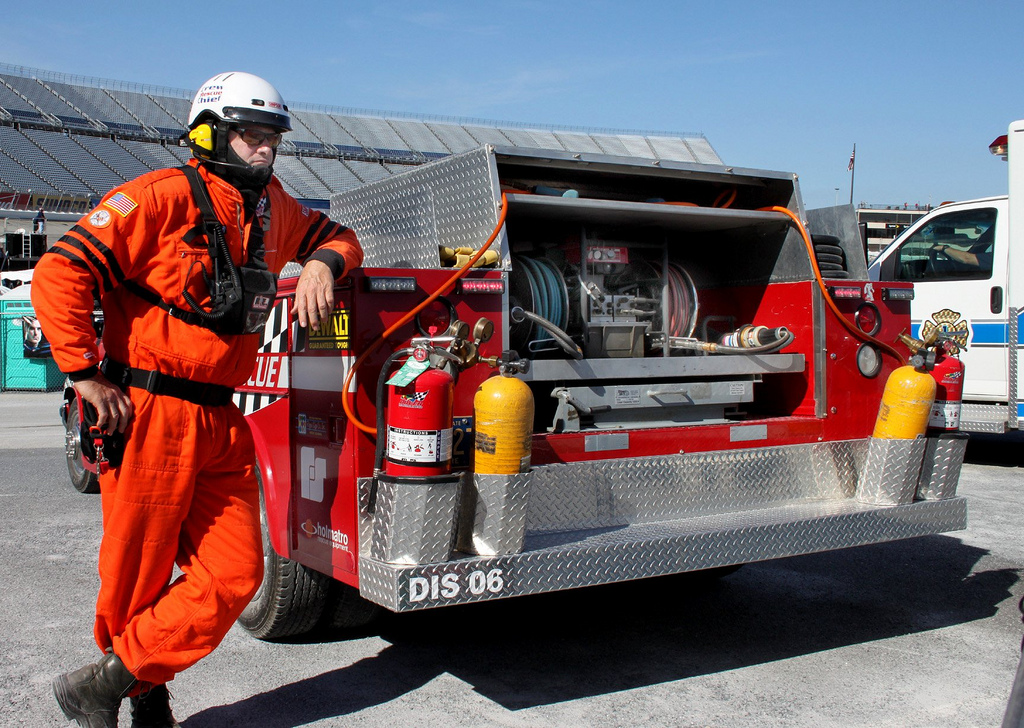