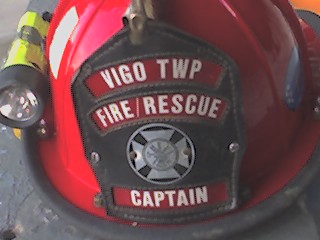 Years in Fire/EMS:
about 4 years

Years With Department/Agency
about 4

My Training:
i have my nims 100, 200, 700, and 800, cpr, First Responder, Mandatory FF. Hazmat 1st responder Awareness. our dept is getting ready to go though more training here with in a few months.

About Me:
when i truend 18 i went to Bicknell Fire Dept. where the rest of my family was on. They turned me down. So then i came down here to Vigo Twp and been here since. We really don't make very many run but i still love it. you couldn't ask for a better dept. than the one i'm on now. sure we have our problems but who don't.

Why I Joined Fire/EMS
I joined the fire dept becaues when i was a kid i loved when my dad would take me up the to fire dept. It's something that just kinda grew on me.

Why I Love Fire/EMS
i love helping people out. i love the feeling when a person comes and thanks you for everthing you did.

Top Issues Facing Responders:
I don't know about other places but here it's other depts working with each other and not getting big heads. Its a new year now and new people running the shows. maybe there will be a change.

Just though i would tell you all alittle about myself. I'm single. i'm 22 Male. I live in Bicknell Indiana. little whole in the wall. I think i'm a easy going guy untill someone pisses me off. I'm on the Vigo Twp Fire Dept. I have been on the dept for about 4 years now. I v'e been a capt. on here for about 2 years. Fire fighting is about all i know anymore. I'm single. I love to go out huntting, fishing ect. I really don't know much more to say bout me. you can send me a e-mail at vigo_twp_firefighter@yahoo.com. i also have yahoo messanger. feel free to send me a message. talk to you all later.

A man (a firefighter) comes home to his wife one evening and says
"honey we have a great system at the station bell one rings we put on our
uniforms, bell two rings we get in the truck bell three rings we go and put
out the fire," "but i think that should be different when i come home a say
"bell one" I want you to drop everthing you're doing, when i say "bell two"
i want you to go to the bedroom and take off all your clothes and when i say
"say bell three" we are going to get into bed and make love all night long.
So the next night when he came home he said "bell one" so of course she
stopped everything she was doing he said bell two she went to the bedroom
and stripped and on bell three then started to make love, about 10 minutes
passed and his wife said "Bell Four" he said what the hell is that and she
said pull out more hose you're nowhere near the fire.

A fireman is at the station house working outside on the fire truck
when he notices a little girl next door. The little girl is in a little red
wagon with little ladders hung off the side.

She is wearing a fireman's hat and has the wagon tied to a dog. The
fireman says "Hey little girl. What are you doing?" The little girl says
"I'm pretending to be a fireman and this is my fire truck!"

The fireman walks over to take a closer look. "Little girl that sure
is a nice fire truck!" the fireman says. "Thanks mister", says the little
girl. The fireman looks a little closer and notices the little girl has tied
the dog to the wagon by it's testicles.

"Little girl", says the fireman, "I don't want to tell you how to run
your fire truck, but if you were to tie that rope around the dog's neck I
think you could go faster."

The little girl says, "You're probably right mister, but then I
wouldn't have a siren!"

The call of an accident, injuring more than one, a car or a truck, the
sad loss of someone...

That's why we're here, to help those in need, we're not here for
money, fame, or greed...

To help those fellow friends, who can't help themselves, to put our
lives on the line, to save someone else...

We're volunteers because we care, because we want to help, to help
others who are in need, not for ourselves...

The call of a grandfather who may have taken his last breath, a
grandchild that may remember, nothing but his death...

A mother in labor with her second son, we bring the boy into a world
full of love...

A farm in danger, horses and hay in the barn, the flames rising high,
but we lend an arm...

We're volunteers because we care, because we want to help, to help
others who are in need, not for ourselves.

A little boy walks into his parents' room to see his mom on top of his
dad bouncing up and down. The mom sees her son and quickly dismounts,
worried about what her son has seen. She dresses quickly and goes to find
him.
The son sees his mom and asks, "What were you and Dad doing?"

The mother replies "Well you know your dad has a big tummy and
sometimes I have to get on top of it to help flatten it."

"You're wasting your time, " said the boy.

"Why is that?" asked his mom, puzzled.

"Well when you go shopping the lady next door comes over and gets on
her knees and blows it right back up."

It was a few days after Christmas this little boy who got a fire engine for Christmas was playing while his mom was listened from the kitchen. He was acting like the old captain rolling up on a structure fire:
" ALL RIGHT GUYS, GET YOUR %$#@ TOGETHER AND PUT THAT &^%#@! FIRE OUT NOW!!!".
Hearing this upset his mother who came running into the room and sent him to the bedroom for 2 hours. Two hours later he came out of his room and resumed play (with his mom listening cautiously from the kitchen) "
"All right guys let's mop it up." then he turned to the imaginary owner of the house and said, " If your pissed about the two hour delay, talk to the old bat in the kitchen!

A fireman and a policeman died and both went to heaven where they were issued their wings with the warning that if they had even have one bad thought their wings would fall off.
Well, everything went well for some time then one day they passed a very attractive and well put together young lady.
As the fireman turned to watch her pass his wings fell off.
When he bent over to pick them up the policeman's wings fell off.

Two fellows were sitting in a coffee shop...suddenly the Town's Fire Alarm went off ... one jumped up and headed for the door ... his friend shouted, "Hey, Tom, I didn't know you were a fireman!"
Tom replied, "I'm not, but my girlfriend's husband is..."

The fireman climbs the ladder to the bedroom of a burning house, and there he finds a curvaceous brunette, "Ah", he says, "you are the third pregnant girl I've rescued this month".
"But, I'm not pregnant!"
"You're not rescued yet!"

A firefighter died and went to hell where he finds a wall of clocks.
After seeing all these clocks on a wall, with his friends names under them, he asked the devil, what the clocks mean?
"That's easy, each time one of your friends mess up on earth, their clock speeds up one hour." says the devil.
"I don't see the Chiefs clock anywhere?" the fireman says.
The devil replied, "Oh him, we have his down in the basement, we're using it for a fan."

Why should you avoid using the bathroom after the chief? Two words: Butt pimples!!

Q. A fireman had two sons. What did he name them?
A. Hosea and Hoseb

How do you rate at your fire Dept.

Chief
Leaps tall buildings in a single bound
Is more powerful than a locomative
Is faster than a speeding bullet
Walks on water
Gives policy to God.

Deputy Chief
Leaps short buildings in a single bound
Is more powerful than a switch engine
Is just as fast as a speeding bullet
Walks on water if the sea is calm
Talks with God.

Assistant Deputy Chief
Leaps short buildings with a running start and favorable winds
Is almost as powerful as a switch engine
Is faster than a speeding BB
Walks on water in an indoor swimming pool
Talks with God if special request is approved.

Captain
Runs into buildings
Reconizes locomotive two out of three times
Is not issued ammunition
Can't stay afloat with a life preserver
Talks to walls.

Senior Man
Falls over doorsteps when trying to enter buildings
Says, "Look at th choo-choo"
Wets himself with a water pistol
Plays in mud puddles
Mumbles to himself.

Firefighter
Lifts buildings and walks under them
Kicks locomotives off the tracks
Catches speeding bullets in his teeth and eats them
Freezes water with a single glance
HE IS GOD!!!!!

Firefighters Christmas Poem
Twas the night before Christmas and all through the town,
the fire siren echoed blaring its sound.
The firefighters came running from far and from near,
and raced to the trucks quickly donning their gear.

And I in my bunkers my boots and my hat,
jumped to the engine to see where the fire's at.
Down at the corner of Fifth and of Oak,
the dispatcher informed us of a house filled with smoke.

Smoke poured from the sides, from up and from down,
yet up on the roof there was none to be found.
So up to the rooftop we raised up a ladder,
and climbed up to see what was the matter.

I came to the chimney and what did I see,
but a fellow in red stuck up to his knees.
Well we tugged and we pulled until he came out,
then he winked with his eye and said with a shout.

"These darn newfangled chimneys they make them too small,
for a fellow as I, not skinny at all."
With a twitch of his nose he dashed to his sleigh,
and called to his reindeer, "AWAY now, AWAY."

As we rolled up our hoses he flew out of sight, saying:
"God bless our firefighters"
...and to all a good night.
T.T.I.O.T International Investigations. 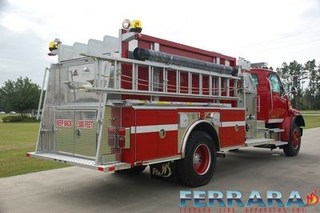 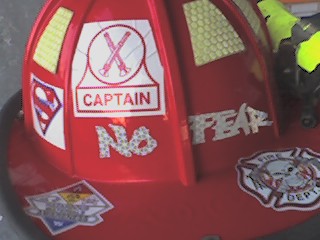 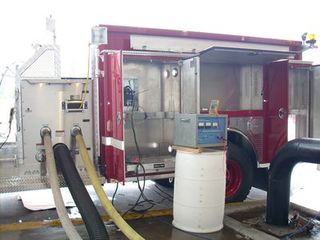 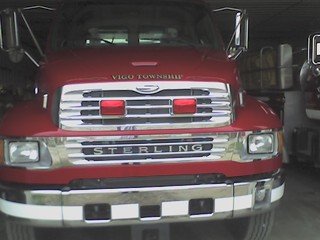 reecea martin said…
how are you doing tonight? i am hanging in there. i miss my dad.thanks for the support...

jeremy mankin said…
did we survive the flood ?

josh metz said…
well thats good its better then us

Kayla Rodman said…
Hey! Thanks! I hope you stay safe too!

Doc said…
Hope ur having a great week.Stay safe and have fun.

Kayla Stedman said…
Hey!..So um ya I'm def. bored so I'm sending you a comment..i was so lonely last night loll cause u fell asleep on me it wasn't me for once. loll..but ya o well its all good..anyway just wanted to say hey and u better get up and text me loll..well see ya later..bye!