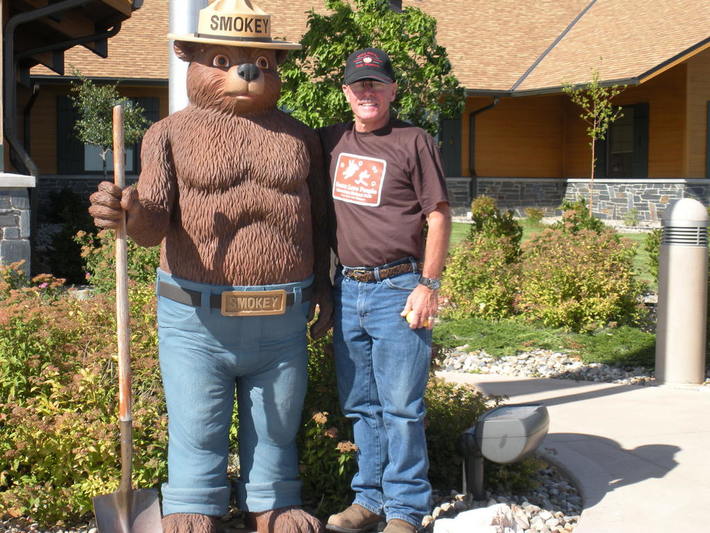 Self recovery of mired brush trucks

Other Past or Current Departments and Organizations
Served in the US Army for over 38 years. I've served in three war zones so that should count, at the minimum, for common sense, safety and equipment knowledge in /fire/rescue work.

About Me:
I have a true desire to help those in need. Even if their own stupidity leads to an emergency.

Patriotic and a high sense of loyalty.

Day Job:
I am always ready to respond when the tone drops. Night time also.

Why I Joined Fire/EMS
I relocated to a rural area of Northeast Texas where it's volunteer FDs only. I joined to help my neighbors. Some whom have lived here forever and don't realize that we are volunteers.

Why I Love Fire/EMS
Serve area and promote volunteering brenda caldwell said…
Have been away for awhile from my page, just want to say hello

Ray Hoffman said…
I never was a good speller

Glyne Alleyne said…
Hey Bill, its been a while... whats happening over there? Hurricane Bill gave us a little scare over here.

Brent A. Ellis said…
Hi Bro. thanks for your comment on my blog. I guess in some ways, I am a bit more sensitive to his side of it, in that, I lost my dad this past November who died at 82 while in prison, and I have a young nephew currently in prison. Both deserved to be there for the things they did and the bad choices they made. But while my dad did recognize his mistakes and was trying to make amends, my nephew will likely spend more time than he was sentenced to due to his bucking the system in there. So I also certainly do recognize the difference when someone who has made a mistake in their life truly goes the extra mile in turning their live around as my friend has done. He will be ok because he is a survivor who has learned from and continues to learn from his mistakes, and strives to better his self so as he can better be of service to others. As you will note, some were less forgiving in their comments to the blog, and I do understand their point of view and respect it. But at the same time, when it is crunch time, and the saving of a life is at stake, like the examples I used in the blog, you and I are praised if we save a life or if a brother FF goes down and we safely drag them out. So in the end, if we are that life that was saved from imminent death, are we really going to be concerning oursleves afterward with the fact that the rescuer was an ex felon in the past? I believe the scorecard is judged on our lives when we reach the end of it & based on what we did with our life as a whole during our time of living, and Judged by one far greater than ourselves. despite anyones feelings or beliefs on the afterlife/ God etc. It does not take a rocket scientist to realize that life is a gift, and is ours only for a limited timeline, Thus, again, showing that the scorecard at the end will show based on the whole of it, not just on a mistake made at some point in it, whether or not we squandered it. Also as I stated in the blog, not all of us "have a record", but who among us has never done anything wrong? I can only fairly speak for myself. If I were the life this guy saved, the last thing I would ever be concerned with/about while treasuring my reprieve from an untimely death, is whether or not years ago, the guy who saved me made a mess of his life. Especially if after that mistake he had turned his life around for the good such as my friend has done and continues to do. Just the way I see it though. Everyone is entitled to their view/opinion. Life is about character. No question about it. But again, it is our whole life, not just certain fragments of it that truly determines our charater as I see it. I can also understand those who commented that the public could be concerned about an ex felon being in their home in an emergency. And I realize that the appearance and integrity of the fire dept as to public image is a due consideration also. But at the end of the day, and at the final "roll call," I believe, and I would hope, that my own life (and or this brother firefighters life) would be viewed/Judged by how the whole life was lived rather than just on one or two incidents in it. I also believe everyone deserves a second chance. When I was a Marine, we had guys who had been given a choice by a Judge for crimes they were being adjudicated for, and the choice was go to prison or join the military. I served and fought with some of these men in Iraq, Afghanastan, and in other perilous settings. I saw these men fight and die with honor, I saw them serve with courage, distinction and dedication. And I never once worried about them "having my back". And on more than one occasion, I helped load their remains into a bodybag to be sent home to Arlington where they were burried with full military honors as heroes. Never once did I hear a word uttered about their being a felon or an ex con. But my FF friend is alive, and also is a Marine veteran who made a mistake he is ashamed of years ago, but to me he is also an example of a life turned around completely. And to me, that speaks volumes as to his character. And my belief is he should not be judged solely by his one mess up in life all those years ago, But by what he has done with his life since that time. As for his being on parole, parole is an after effect. Not the crime or the punishment for it. The Parole board felt he was ready to return to society or else they would not have granted his parole afterall. Parole is the supervision of a released person for a period of time to see whether they sink or swim once released back into society. This brother has obviously swam as I see it. And it should be noted that his swim is and has been in shark infested waters of temptation. In the Marines we are taught to overcome, improvise, and adapt to get our task done. This brother Firefighter and what he has done with his life is a crystal clear picture of just that. I salute him and say, "Semper Fi Marine!" And when the scorecard on his life is tallied, I'm betting he will be declared a winner, not a loser.

Mick Shelley said…
Hey Billy, Very well said Brother. I hope all is going well for you.
Thank you for the friendship for all these years. Stay safe out
there Brother, talk to you again soon. Mick

brenda caldwell said…
Hey my friend. We go on our next ride june 11,12,13, and come back the 14th . going to the ROT rally in austin. Joe says we need to meet up to visit sometime. take care and be safe.