Engine or Truck out 1st? 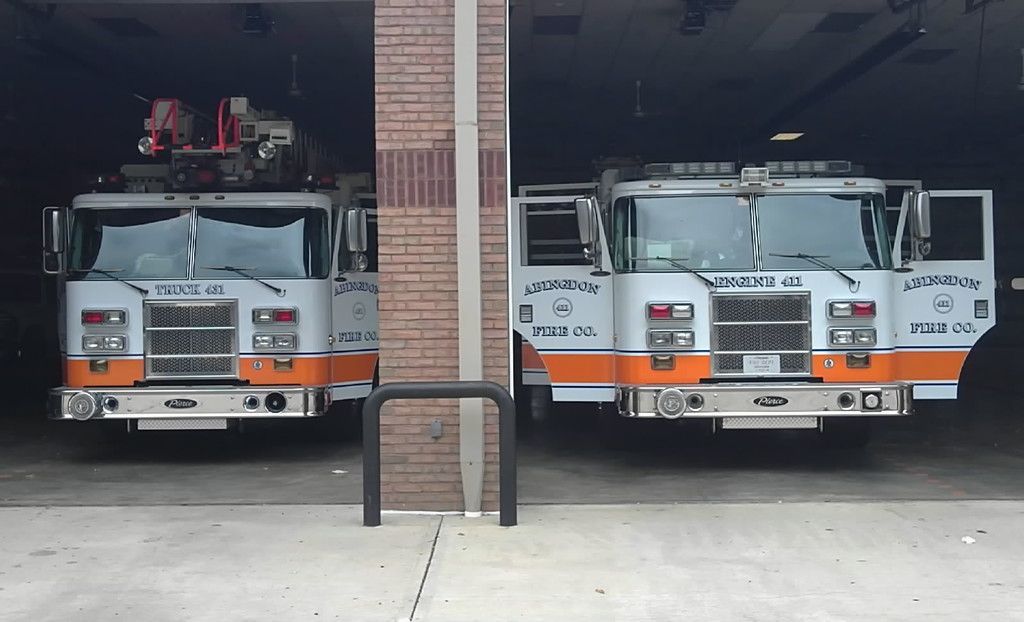 Awhile ago our company did this for awhile but had problems with it...if We had a truck driver at the station we would put that on the road first if it was our box and full assignment,the idea was the truck can position itself where it needs to be positioned the engine behind will hit hydrant go inside and all that...Seems simple right? NOT! sometimes the engine was still a good x minutes out,or there was an engine crew(mutual aid usually) that did its own thing.Our truck is a quint so to speak 105 ft ariel ladder,7 ground ladders ranging up to 35,2 roof ladders,pump,500 gallons of water,and hose 5 in,1 3/4 inch,and 3 inch,but was wanted to be run as a truck only so there were those problems as well. We took it out first for automatic alarms as well. We are back to run engine out first. Now if we had a crew for engine and truck i wouldn't mind truck out first for that reason but one crew should be engine what does your department do and would you agree if the truck is first out?

Permalink Reply by Lt. Shane Peterson on March 11, 2011 at 2:25pm
Our policy is that the engine is pulled out first then the ladder. The engine driver should know to leave room for the tower when it gets there.

The only time the Tower is pulled first is for mutual aid calls or the engine is O.O.S.

Permalink Reply by HeightsFF on March 11, 2011 at 2:28pm
Engine should preceed the truck. You want the engine to position itself just past the front entrance to building for an easy stretch. Obviously you need to leave room for the truck. Once enough line is stretched to cover the fire area the engine can pull away to hit the hydrant. This backstretch is usually only good if you have plenty of hydrants around. If not you need stretch hydrant to fire. (In-line pumping)You still wanna be just past the fire building for an easy stretch.

Permalink Reply by John Crabbe on March 11, 2011 at 2:51pm
What we do is irrelevant because we send multiple companies to a fire right away. However, for an alarm sounding the first due pump will proceed lights and sirens and the other rigs non-priority.

As for this case, if in such a position, send the pump out first. For the most part the priorities will be what any good engine crew can accomplish (unless you have high rises with multiple people hanging out of windows). Many truck duties can be done by engine personnel, even if a truck is delayed in getting to the scene, typically for most depts they don't need an aerial device right away.

Now having the quint as first out would be OK, but you already said you want to use it as a truck moreso than a quint.

Permalink Reply by FETC on March 11, 2011 at 4:18pm
We operate similiar to John, our first due engine goes lights and sirens and the rest are on flow of traffic (reduced response) move up. It reduces the liability of additional units forcing their way through traffic with near misses, actual accidents, and/or civilian or LODD's. (I did note the FDNY Ladder Truck responding hot to a car fire that was involved in civilian fatal accident this week) Once the first unit arrives on scene, they can upgrade the alarm's response to all HOT if the size-up now warrants a quicker response. It's not the coolest thing for your hero ego but less "hot responses" are clearly safer for the firefighters.

Therefore, the Ladder vs. Engine is a moot point. Unless you are responding to a reported building fire, then everything is hot. If your engine crew is on their game, then the ladder will get plenty of room. If you can't the engine guys to leave room, then you might have to swap your order of response, due to lack of common sense.

Permalink Reply by Marty Hrinko on March 11, 2011 at 5:33pm
We run our truck first for everything but MVA's. Our truck is a 103' stick, with a 500 gal tank and a 2000 gpm pump. I agree with the truck being out first to get good positioning for the truck company.

Permalink Reply by Wade Seely on March 11, 2011 at 5:43pm
Which ever one I am on. Just joking I think engine first,because like John said an engine crew can do truck work as well; especially if set up as a rescue pumper.

Permalink Reply by Dieseltruckie33 on March 11, 2011 at 5:47pm
for us it depends what type and where the call is if its on the older side of our area our ladder truck is due but on the other engine is out first due so it primary falls on the the call

Permalink Reply by Vic Silverfish on March 12, 2011 at 1:58am
In most systems, a truck with LDH and a pump is called an "engine"

Permalink Reply by Shareef Abdu Nur on March 12, 2011 at 6:27am
In my own humble opinion, I would suggest staying with manning and getting your Truck out of the barn first. I understand the problems that you ran into with the Engine being a little later than expected and the other mutual aid Eng Co's sort of doing their own thing but all of that can remedied with training and communication.

Dialogue with your mutual aid Co's and advise them that your Truck is moving first and that you need the front of the building if at all possible. Also, let them know that you will function as a Truck Co and that you would like to move them up on your Box assignments to be an automatic Eng Co and that they may be tasked to operate as the 1st due Eng Co. In return for their assistance, you and your Truck Co agree to respond as the first due Truck to any incident in their area as well. You will also need to train your guys and get them to wrap their heads around the fact that you do not have the luxury of manpower to be able to staff both apparatus immediately so your house is rolling the Truck first purely for the versatility of the quint.

Out of curiousity, how many members do you get first out on your Truck? The realism of it all is that we can no longer operate like we did in the past when we had a surplus of manpower. We can not offer the same services as we did before. If staffing permits that we can only get a 1 full Co out of the door than we must rely on that and contract with surrounding communities to help because realistically we are all in the same boat sort of. We won't abuse our neighbors but face it, we need help!

Permalink Reply by Charles T Brady on March 12, 2011 at 6:37am
A quint w/ 500 gals. is not alot. In my opion it should be engine first. You can always position the truck.Besides you have more water volume

Permalink Reply by Tim Wright on March 12, 2011 at 7:13am
Truck first engine gets in the way usually , and engine can pull more hose cant just add a fly to the ladder. But that is my feeling

Permalink Reply by Charles T Brady on March 12, 2011 at 10:51am
Sound's like who ever drives the engine should have a lesson on positioning the engine so that other appratus can play.