Do We Really Need To Drive Code 3? FDNY Does Not Think So... Do You? Firefighters in Queens Won’t Rush to All Calls

A million times a year, fire trucks are driven into the streets of New York City, usually at breakneck speeds with lights and sirens blaring. The rush is often critical: Firefighters converge on fires, douse the flames and save lives. The same response applies in less serious situations — calls that are not life-threatening, which are expected to reach around 230,000 this year after steadily rising from 41,054 in 1969. But with 35-ton rigs barreling through red lights and forcing traffic off the roads or through busy intersections, accidents occur, sometimes with deadly consequences. Nearly 700 times last year, the city’s fire trucks collided with other vehicles and, occasionally, with one another. Now, for the first time, the Fire Department is re-engineering its approach: Its plan, set to begin on Monday as a three-month pilot program in Queens, is meant to slow firefighters’ responses to certain calls by having them turn off their lights and sirens and follow the usual traffic rules. 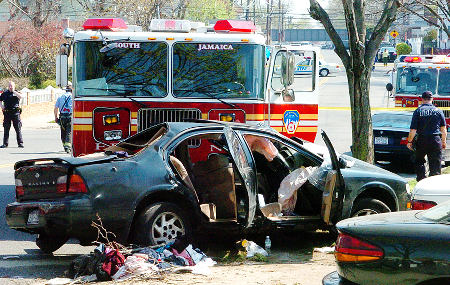 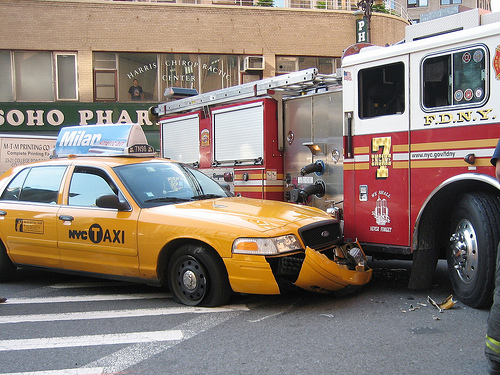 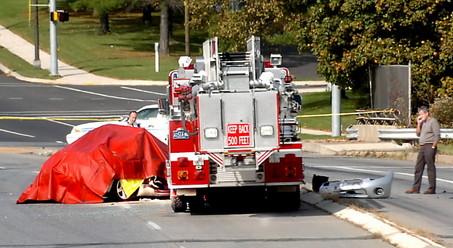 Permalink Reply by Tony P on October 8, 2010 at 12:04am
In my fire service the 'code' for any response is defined under SOP's. For instance structure fire and MVC will be lights and sirens; domestic bin fire and 'smell of smoke' in a street (with no smoke visible) will be normal road rules. The code may be changed to reflect further information given over the radio, traffic conditions, smoke sighting, or anything else really. The SOP of the initial turnout is in this case a guide, we have flexibility - but the OiC must be prepared to stand up and explain why the driver was intructed to drive in that altered mode.

Under our SOP's we're also told to consider the requirement for siren use. (To be considered as an 'emergency vehicle' under the Law we must always have our red & blues going, siren is additional.) Driving past livestock on a country road, consider cutting the siren to not 'spook' the animals. On suburban roads at oh-dark-thirty, consider cutting the noise - except that we must always use sirens whenever going through a controlled intersection (lights or stop signs etc.), any time we want traffic to give way to us. We are also not allowed to exceed any speed limit by more than 20 km/h (12.5 mph). The rules (with some written flexibility) are there to protect both the public and us.

To me the suggestion that we need to travel lights & sirens at all times, so that we can be available for the next call is specious. Here, if a Station is out to a call, any additional call before they are available is automatically passed to the next nearest Station - the CAD handles it automatically. Admittedly our system is best suited to big city operation with close support, but the chance of an additional call in our remote country areas is statistically lower anyway. One of the benefits of being part of a very large fire service of course.

Permalink Reply by capcityff on October 8, 2010 at 7:48am
I don't think you get why I brought up the difference in a big city. I was pointing out that it depends on where you work because the reasoning for lights and sirens are different. We need it to just get through the traffic. So it's not as dangerous as some guy in a rural department gunning it recklessly down the road. My point is that you can't just give the answer for everyone. It depends on the department and area.

Permalink Reply by Spanner 122 on October 8, 2010 at 7:50am
I would have assumed that if it wasn't an Emergency call, then you wouldn't drive "Code 3" or "Priority 1". Here we have a priority system; alarms that are confirmed false (one pump always continues priority 2), non life threatening heavy lift assist, CO with no symptoms, burn complaint, etc, we run priority 2. Emergency calls, such as med life threatening, mvc, alarms, and the obvious, priority 1.

I wonder if the problem isn't as much about driving priority 1/code 3, as it is about learning to drive properly. We have a new SOP out about red lights. Of course, we have always had to stop at red lights and procede when it's safe to do so, but now if the vehicle is caught by a red light camera, then we will pay the fine, or work a shift in lieu of the fine. The cameras also detect the speed entering and the speed exiting the intersection, so it's easy to determine if the vehicle stopped at the line or not.

Proper care and attention while driving, no matter what you're responding to is of the utmost importance.

Permalink Reply by Shareef Abdu Nur on October 8, 2010 at 12:08pm
From the Fire side of the table, we all have to be mature enough to admit that there are times when we do not need to run lights and sirens to the scene for every call and for every apparatus responding. I agree with FDNY that for smoke/water flow/fire /CO alarms only the first due company needs to run lights and sirens while the rest of the box assignment companies can come with the regular flow of traffic unless upgraded to emergency response by the first due officer. The same goes for water leaks, kitties in trees, etc... Now, for reports of fire, smoke, collpase, entrapment, people in the water, etc...Please, run lights and sirens but with due regard.

For each and every apparatus incident that could have been avoided, the blame falls squarely on the shoulders of the Officer. We as Fire Officers have to show the courage to tell the drivers to SLOW DOWN and to reprimand them if they ignore our orders. I am not an "order yeller" by no means, but if it means saving lives, then we must do the right thing.

Permalink Reply by Mike "Lapo" Lapotasky on October 8, 2010 at 12:56pm
Lest we forget...activated alarms can sometimes become 4 alarm fires with entrapment...

AND...have you ever driven through Queens? No traffic as compared to Manhattan? Do not know what city you were in, but that is close to untrue!

Permalink Reply by Kenneth Gene Hall on October 8, 2010 at 4:18pm
thank god for the small town i vol. in. code3 or no code the responce time is about the same so we don`t have this issue

Permalink Reply by Tony P on October 8, 2010 at 11:05pm
I've seen and heard those 'Q's on Youtube and TV. Loud aren't they... Under our SOP's, if the driver can't operate a device, it can't be used - we manage OK with the electronic sirens I think (and I have no intention of getting into an argument about how good the 'Q' is!!!) Many of our trucks down here have air-horns as well, but they aren't considered an emergency device, simply a warning device.

The law here still allows the old bells, but the CFA doesn't, siren or repeater horn only. Repeater horn? You know the lovely old European style BeeBawBeeBaw type sound? The siren control on our Pumper still has that option, sometimes people even use it! Certainly makes people look, because it's not often heard.

Permalink Reply by Tony P on October 8, 2010 at 11:12pm
Totally with you Shareef. We're always prepared to here further information over the radio and adjust our response accordingly. And I have been told 'watch your speed' a couple of times when running lights and sirens. Doesn't worry me in the least, I've said 'thanks' for the reminder.

Permalink Reply by Tony P on October 8, 2010 at 11:19pm
What is to forget? It still doesn't mean that every vehicle that responds needs to run lights and siren (Code 1 here). We send the first two vehicles out Code 1 to those calls or any other emergency response call. All others run under road law conditions Further information received over the radio can have all vehicles upgrade. The difference in full response arrival time will not change that much, and it is far safer when you take into account the civilians that freak at the sound of a siren, and the number of drivers who suffer from 'sirenitis', the ones who allow the adrenalin to control them when they have their siren running.

I should also add the the vehicle OiC can call for an upgrade if road/traffic conditions warrant it.

Permalink Reply by Mike Schlags (Captain Busy) Retd on October 9, 2010 at 2:27am
My area from the farthest North and South fire stations was over three-hours driving time. This includes both rural, suburban and metropolitan districts that I have worked in for the past 38 years, or at least did until retiring this year... Anyway, having worked as both a paramedic for privates, as well as my gig with the fire service, I can say unquestionably that going 65mph in a "more rural area" means that you great visibility for the most part compared to all sorts of surprises.

The key factor is people. More people means statistically, you have a higher chance of not just running into someone but that someone again statistically has a pretty good chance of being an idiot that does incredibly irrational unpredictable things. Rural areas have less people... so... there is less chances for mva's in my opinion. The only time this changes is during inclement weather when all bets are off due the unpredictability of the weather.