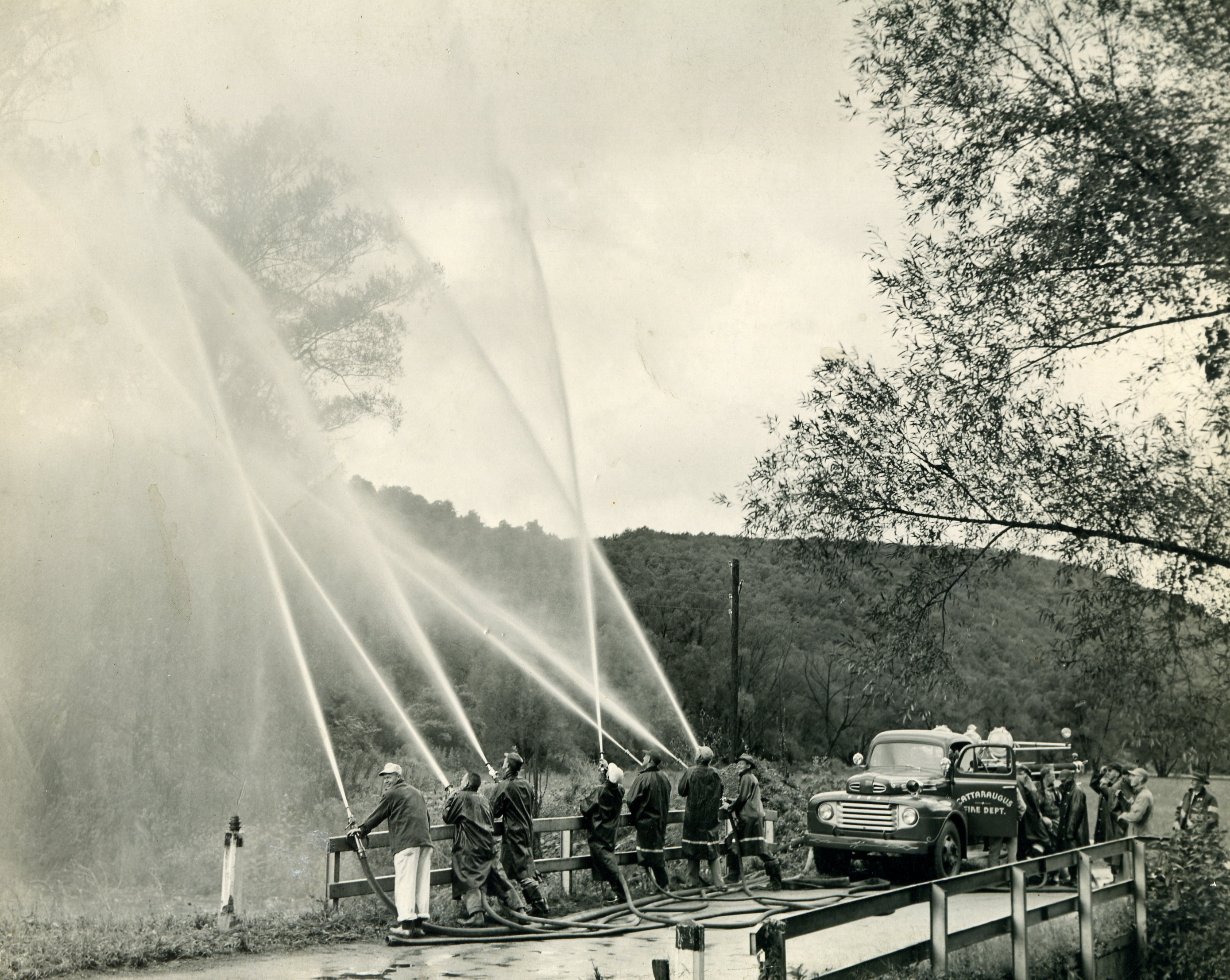 On a late summer day in 1949, the members of the Cattaraugus Fire Department are putting their new pumper through its paces. A drafting operation has been established at an unknown location in Cattaraugus County, New York.

The truck has just arrived from Young Fire Equipment in Buffalo, and is equipped with a 500 GPM three-stage pump. A quick estimate from the type and number of lines shows that the pump is working well beyond its rated capacity. Notice the Sterling Sirenlite on the bumper, a combination siren and red warning light. Folks, that’s the entire warning light package, for back in this era rotating beacons on truck roofs had not yet become a requirement.

We see a group of firemen huddled around the pump panel, watching and waiting for their turn at the controls. No fire police are visible; back then they weren’t needed, for everyone slowed down to watch what firemen were doing.

Seven more firemen are playing their hose streams into the trees, being careful to miss the telephone and electric lines. Their smiles suggest a wisecrack made at the photographer’s expense, although they are clearly having fun crossing the fire streams. Perhaps they are delighted at simply being outside, on drill and spraying water.

See the rubber coats and turned-down three-quarter-length boots that some of the firemen are wearing? Back in the day, the coats, boots and helmets were carried on the truck. The first members to arrive at a fire scene donned the few sets of turnouts the department could afford, while latecomers wore the clothing they showed up in.

An older man stands off to the right, taking in the scene with a satisfied look. He’s probably the chief, overseeing the operation and evaluating the performance of his new “baby.”

I can almost remember this era, for this picture was not more than ten years old when it was given to me by a relative who worked for Young. It is quite possible that I traveled this very road more than once - to or from a family reunion, or perhaps in search of a fishing spot. There’s a certain look to the hills, the road and even the faces of the men that I recognize. It may be because of the many, many times I’ve studied this photograph over the years; like old family stories that are told again and again, eventually the memories of an event and memories of the story of an event become indistinguishable.

Much has changed in the art of firefighting and fire equipment since this picture was taken, yet much remains the same. Many fire departments still go out on drill one night each week for pump training, conducted at a favorite out-of-the way location. Members still gather around the pump panel, waiting their turn to practice picking up draft and getting “checked out” on the pump.

Firefighters don’t need to be asked more than once to stretch a hose, screw on a nozzle and spray water. Fire Chiefs still get satisfaction from watching a good drill that is well attended, and a truck that can do the job when needed.

New fire trucks still attract firefighters from all around, like moths to a light. And we still enjoy the simple pleasure of being out on drill on a fine summer evening, honing skills and pumping water with a good fire truck.

Comment by lloyd on December 28, 2009 at 8:57am
This is what it's all about, training, getting acquainted with the equipment, brotherhood, and just plain fun. Gr8 pic & story. My 1st dept had and open cab pumper. Was not fun in the cold or rain.

Comment by Jeffrey Tempesco on December 28, 2009 at 3:57am
Great photo. Makes me want to go stir up some of our old photos and reminisce. I grew up around the FD and joined as a Junior in 1983. Oh the days of riding the tailboard! I miss a number of people from back in the day along with the simplicity....

Comment by Steve Hasselriis on September 24, 2008 at 9:24pm
Joe, thank you for the great post! My grandfather, Howard Preston, was a NYS fire instructor and longtime chief of the Cattaraugus fire department. I'm sure he's in the photo.

What a great photo complimented by an even better caption, capturing a moment, a small frame of history and an entire era all at the same time.

I just traveled through Cattaraugus last month for my cousin's funeral in Salamanca and was enjoying how that little village has survived while still appearing to be frozen in time.

The only safety systems the new engine was outfitted with were probably coarse rope belts with a big sharp hook at the end - intended to keep them tied to the truck as their feet lifted off the tailboard on every bump.

I still have one of those in my collection of fire memorabilia. You could put an eye out with it.

It brings me back to riding the tailboard when I started in 1980.

Comment by Art "ChiefReason" Goodrich on May 12, 2008 at 9:23pm
Looks like one of them thar high pressure units.
Remind me of the old Jim Beams.
Lots of pressure, but very little water.
Didn't want to run out of water, now, did we?
Great picture, Joe.
Well written commentary as well.
Thanks.
Art

Comment by Rescuefrog on May 10, 2008 at 1:35am
Thanks for sharing and offering up memories

Comment by lloyd on May 9, 2008 at 11:36pm
Truly a great imortalized memory. I still remember the open cab pumper we had when I started with my first dept. Thanks for the post and vivid description of the action. So many drills and so many memories, they never seem to fade away.

Comment by Tim on May 9, 2008 at 11:07pm
Joe, You're absolutely right in your listing of the simularities between the times. There is still excitment in taking the engine out and drafting/flowing water. There is also alot of contentment. Very well written. Great post! Thank you.

Comment by Engineco913 on May 9, 2008 at 4:31pm
Ah the good ole days. The days when it seemed much less complex, and much more laid back. Sure safety wasn't at the forefront for that era, yet at the same time the firehouses were the tightest grouping of multi cultural lifestyles that all came to one beautiful dealing.
Now we sit and read so and so having a "feline spat" and wanting to punch others in the face, people tired of running bs medicals, people complaining about members not giving their all and it brings me back (to as early as the 80's) when I can still recall those days when life was so good.
Great post Joe.

Comment by FireCat on May 8, 2008 at 11:53pm
Joe,
I love these old pictures and the history behind them, thanks for sharing!