In 2009, based on feedback from the communities that they serve, Clifton Springs Fire Department acknowledged the need to expand their Fire Prevention educational programs. The 50+ member volunteer fire department in Ontario County, NY responds to an average of 300 fire calls per year serving the Village of Clifton Springs along with portions of the Towns of Phelps, Manchester and Hopewell. The village, located between Syracuse and Rochester, is a mixed demographic of both urban and rural settings encompassing numerous farms, schools, hospitals, senior citizen communities, an active industrial area and a growing tourism profile.

For many years the department’s ability to provide live fire extinguisher training to the members of their community was limited to using a burn barrel and gasoline. This method was generally considered unsafe, unfriendly to the environment and inconvenient for both the department and for the trainees. Suitable outdoor space for live burn training was limited and required the trainees to travel to the department to partake of the extinguisher training program. Fire prevention programs in the local elementary and high schools consisted primarily of discussions and handouts about fire safety.

The department recognized that a hands-on fire safety training program would be more effective in long-term memory retention for the trainees. Based on that need, the department researched various training system vendors and ultimately determined that the BullEx I.T.S. Xtreme would provide the widest range of fire prevention programs suitable for their specific needs. First Lieutenant Amanda Spence explained ,“We knew we needed to grow our fire prevention program, but we had very limited funding, most of which was allocated to other departmental budget items, so if we wanted to expand our fire prevention activities, we would have had to come up with the money out of our own pockets.” 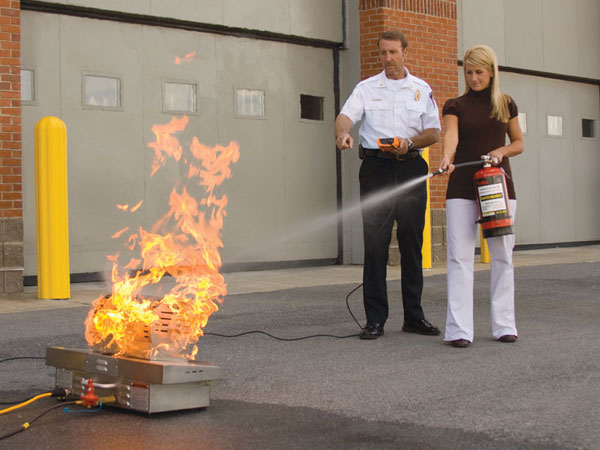 In 2009, the department submitted an application and was awarded a Fire Prevention and Safety grant to purchase a BullEx I.T.S. Xtreme live-fire extinguisher training system. The prior year’s effort to obtain the same grant was denied because the department sought funding for a “laundry list” of items rather than focusing specifically on one particular purchase. After they were denied in 2008, the department tightened the scope of their grant request and were successful in obtaining the necessary funds. Lt. Spence stated, “Our salesperson, Matt Monroe, was a great source of information regarding the grant application process. He was available right from the start to provide product specs and resources for information-gathering that proved helpful in collecting the necessary data for the grant application.” Using NFPA and NVFC statistics to support their narrative, the department provided specific steps in their application that would be followed to quantify the success of their fire prevention programs, including pre and post-training testing and evaluations.

Clifton Springs Fire Department received their I.T.S. Xtreme in November of 2009. The department opted to upgrade their propane-fueled portable fire extinguisher training system to include a variety of props which simulate a trash can (Class A), a stove top (Class B) and an electric motor (Class C) fire scenario. “We felt that the variety of fire simulator props would appeal to a larger segment of our population, particularly the electric motor for our industrial businesses,” said Lt. Spence. 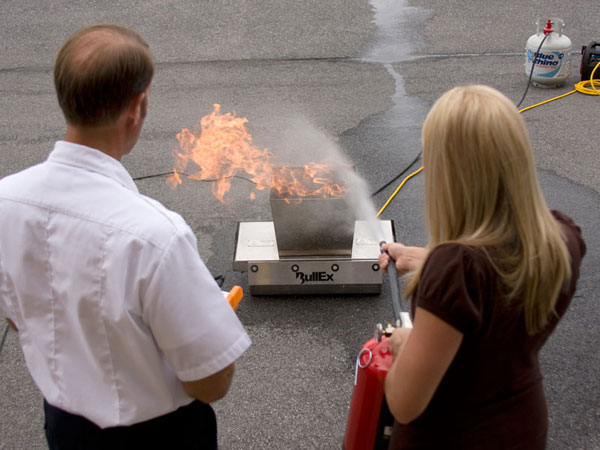 To date, the department has provided approximately one training session per month since receiving their I.T.S. Xtreme. The most recent group of trainees was a local Boy Scout pack. Lt. Spence explained that although the group was initially hesitant about handling a fire extinguisher and confronting live flames, after instruction, “They had a blast. They were competing with each other and the instructor to see who could put out the fire the fastest. They learned some really important fire safety lessons at the same time, so it was a successful training session all the way around.”

The department has also experienced an unanticipated benefit with the purchase of their BullEx training system. In years past, the department would have to take their fire extinguishers off of their apparatus to provide the necessary training. Now, the department doesn’t have to worry about the expense of recharging their extinguishers after every fire prevention training session or having to take potentially life-saving equipment out of service. Lt. Spence went on to give their BullEx I.T.S. Xtreme a 10 on a 1-10 satisfaction rating scale, “It’s safe, it’s portable, it’s effective, it’s easy to use and it’s saving us time and money. We highly recommend the I.T.S. Xtreme.”

Comment by Mary Ellen Shea on December 3, 2010 at 7:55am
Thanks for the comment Bob- the product is great for taking the headache and overall cost of hands-on extinguisher training out of the mix--the gratifying element of the story is that a volunteer department with nothing much in the way of a budget had a successful grant application and chose to purchase a BullEx product with the funds. I may be biased, but I consider it money well spent if it prevents even one fire or averts a fire-related death.

Comment by Bob Allard on December 2, 2010 at 6:36pm
I use to do this training at the base in Mississippi (Military ) were I was in Fire Prevention, all the military personnel civilian and Military all had to do hands on, alot of them were glad to give it a try.