The Lingohocken (Pa.) Fire Company was recently notified that they will be awarded the 2010 Unit Valor Award from the Firemen's Association of the State of Pennsylvania (FASP) for their actions during a complex and challenging extrication. The extrication was detailed in the October 2009 issue of FireRescue's Rescue Report column. Greg Jakubowksi, a long-time columnist and editorial board member for FireRescue, is chief of the Lingohocken Fire Company. 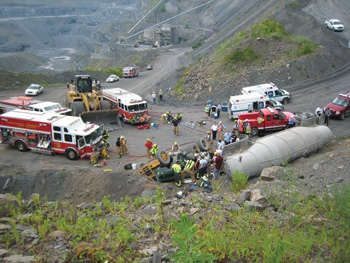 In announcing the award, John Berm, chairman of the FASP Awards Committee, noted that the Lingohocken crew's "heroic actions on the day of July 16, 2009, in making the best rescue one can make under the severe conditions, defines the word 'valor.' Your crews are truly to be held in high esteem."

The FASP Unit Valor Award is given to a fire department unit, or group of fire departments that work together on a single incident, that exhibit exceptional courage, extraordinary decisiveness, presence of mind and swiftness of action regardless of their own personal safety, in attempting to save or protect human life.The award will be given at FASP's Annual Convention in Wilkes-Barre on Sept. 23, 2010.

Below is the complete Rescue Report of the incident that ran in FireRescue last year.

On July 16, 2009, firefighters from several Pennsylvania departments faced one of the most challenging vehicle rescues of their careers.

The Bucks County Emergency Dispatch Center received a 911 call for an “industrial accident” in the quarry at Hanson Aggregates in Wrightstown, Pa. The first units from the Lingohocken Fire Company—Chief 35, Deputy Chief 35, Engine 35, Rescue 35 and Engine 95—were dispatched at 1139 hrs, as was Central Bucks Medic 135 (ALS).

As Chief 35 was responding, he received additional information that a truck had overturned in the quarry with the male driver pinned under it. Based on this information and his familiarity with the types of vehicles usually operating in the quarry, the chief requested a second rescue company. At 1142 hrs, Northampton Township Fire Company dispatched Rescue 3. Also added to the assignment: Canteen 19 (Doylestown Fire), Newtown Fire Association Rescue 45 and Newtown Emergency Services Department Engine 55.

By 1145 hrs, Deputy Chief 35 and Engine 95 arrived at the quarry’s front gate and found that the accident site was approximately half to three-quarters of a mile down into the quarry. Within only a few minutes, they reached the victim, confirming that he was trapped in the cab of an overturned dual rear-axle tractor.

The tractor had been towing a trailer down a slope when the trailer suddenly rolled and disconnected from the tractor. The trailer came to rest on an embankment about 20 feet away. The tractor, an “R” Model Mack, also rolled to this approximate location, with the driver trapped inside.

Crews found the driver conscious, alert and very verbal; he was loudly expressing his desire to be freed. The victim’s head, shoulders and upper torso were visible out the rear window of the cab, and the remainder of his body was trapped inside a small space under the wheel in the tractor’s crushed cab.

Engine 95 went into service using a combi-tool on the passenger side of the cab to access the patient. At 1154 hrs, Rescue 35 deployed cribbing and air bags to stabilize the rear frame of the tractor, and then used additional hydraulic tools to access to the patient. Rescue 3 arrived shortly thereafter and also went in service assisting with patient access on both sides of the tractor.

At 1200 hrs, Chief 35 inspected the trailer, which was on its side on a large boulder and appeared to be stable, and found that it was carrying fine dust from the asphalt plant dust collector. It was not leaking and not an imminent hazard. However, there was diesel fuel leaking from a saddle tank on the downhill side of the tractor.

County Fire Marshal 226 (also Lingohocken District Chief 89) arrived on scene and was assigned to ensure containment of the diesel fuel. He placed a large plastic container under the saddle tank and, when that was filled, he used an additional container. Both containers were left on site for Hanson personnel to dispose of.

Medical Director 125 then arrived on scene, assumed EMS Operations and coordinated with Rescue Operations on the speed and tactics for the extrication.

Command quickly realized that the extrication was going to be lengthy and difficult. Rescue 45 was requested to respond to the scene and stage at the quarry’s main gate. Rescue 66 was transmitted to cover Station 35.
Rescuers were faced with a daunting operation. They needed to cut through a rugged vehicle without causing further harm to the patient—all while operating in a confined area. Plus, the vehicle was resting on “screenings,” a broken rock material with the consistency of sand, so shoring would be difficult.

Then there was the media swarm. By 1227 hrs, there were at least three news helicopters circling above the scene. Newton Police Department 52L had now joined the Command and was assigned to be the public information officer.
At 1228 hrs, crews began needing rotation, so Rescue 45 was brought into the scene from staging. Rescue 66 and Engine 55 were notified to respond and stage at the main gate. Orders were then changed for Engine 55 to respond down to the accident scene. Canteen 19 and MCI 2 were requested to respond as well.

Based on the severity of entrapment and the victim’s injuries, it soon became apparent that amputation had to be considered, so Chief 125 requested the special surgical team from Albert Einstein University Medical Center in Philadelphia, which had originally formed for such out-of-hospital emergencies. They responded in their specially equipped SUV and staged at the gate.

Crews performing the extrication were only able to see the victim’s head, shoulders and upper torso out the rear window of the tractor. As they cut apart the cab, they found that the victim’s air-ride seat was on top of his back, and the collapsed cab was pushing down on that. They then found the victim’s feet and legs entangled among the two gear shifts, with his legs also wrapped around the driver’s seat.

Despite cribbing and air bags placed under the rear frame of the tractor, it was still unstable due to the large pile of screenings it rested on. The tractor was eventually secured to the trailer with a come-along and chains, as the trailer was deemed stable enough to do this. Crews considered various winch arrangements, but the position of the tractor did not lend itself easily to this. The quarry also had a large bulldozer available if needed to help stabilize the trailer.
Rescuers used large spreaders and multiple rams to push the window frame off the seatback. It was difficult to get a solid lift off the sand-like screenings and equally difficult to work with the hydraulic tools in the limited space available under the crushed cab. Platforms and cribbing were used to attempt to secure better leverage. The crews used sawzalls to cut the sheet metal on both sides of the cab. They then used a combi-tool and pedal cutters to cut the seat brackets, steering wheel, dash parts, gear shifts and pedals.

Once the victim’s legs and feet were exposed, rescuers used hand tools to cut and remove his shoes to free his feet. At that point, the driver’s air-ride seat was deflated, fully freeing him from the cab. He was then supported on a back board and slid out the back window and onto a stretcher.

The extrication was completed at 1344 hrs, and the patient was transported by ground ambulance to St. Mary’s Medical Center, where he was found to be suffering from injuries to his lower extremities.

All operating crews were ordered to full rehab at the canteen unit and rehab unit. Rescue 66 was called in from staging, and their crew was utilized to restore the fire department equipment.

Lessons Learned/Lessons Reinforced:
Two different models of rescue tools from two different rescue companies were used during the operation. One model of tools became very hot in the confined space of the cab and was bigger and bulkier than the other model of tools. When purchasing extrication tools, departments must plan for how they might perform in difficult environments such as tight spaces.

Knowing the facility provided an advantage to the operation. The departments have three working quarries in their first-due area and have preplanned for extrications involving trucks much larger than the one involved in this incident.

Comment by Oldman on July 31, 2010 at 8:47am
That had to an extrication from hell. Certainly deserving recognition.