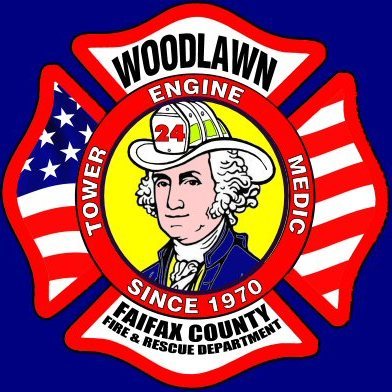 How To Cash Out Large Amounts Of Cryptocurrency? – 2021 Guide

5 Tips And Things To Know Before Buying Your First Crypto

How To Introduce Blockchain Into Your Small Business

Fire Station 24 (Woodlawn) opened in December 1970. This was Fairfax County's first fully funded station with all career personnel. The station is located just north of Ft. Belvoir Army Base along the US Route 1 corridor.

Historically, the father of our nation, George Washington, once owned the entire first due response area of Station 24. The three most visited historical sites in Fairfax County are located in our first due. They are Mt. Vernon Estates, Woodlawn Plantation, and G.W.'s Grist Mill.

With so much history why isn't the station called 'Mt Vernon'? Fire Station 9 was a volunteer house prior to the opening Station 24 and had already been named Mt. Vernon.


Brother Joel Kobersteen posted this in his video section. This is the video produced by Brother Paul Beardmore for the Fairfax County (VA) Professional Fire Fighters & Paramedics - IAFF Local 2068. It was distributed to all work locations within the Fairfax County Fire & Rescue Department in advance of our 4 day Labor Day weekend collection… Continue

You will find that there are several tasks that are common:
Continue

Hybrids: Overemphasized As A Hazard

Knowing a few basic things about hybrids—the location and
construction of battery compartments, the color (orange) used to designate high voltage cables, and the
location of fuses that will isolate the electrical system—should be enough to
help first responders save lives and remain safe in the process. Removing the
ignition key and disconnecting a vehicle’s 12-volt battery are common
first-responder tasks in conventional vehicles… Continue

The Art Of Reading Smoke

In the photo above, there are several colors of smoke. Each color represents different situations going on inside the structure. Can you identify what each color possibly means in this Cape Cod style home? Post your comments below ... Photo courtesy of Wes Gerald, Fairfax County Fire & Rescue.

howard said…
hello brothers and sisters , work in spotsylvania but living here in tysons corner , thks for keeping my family safe while im at work... 29 is my fisrt due station stay safe

kimball said…
Hey, Im actually coming down on October 1 for the written exam and was browsing the internet doing some research to see what the area is like and what the department is all about and came across your account. So hopefulley I'll get to see yins soon. any tips ? lol

JERMAINE said…
HEY WHATS UP
MY NAME IS JERMAINE WATSON I AM A FIREFIGHTER FOR WEST SIDE VOL. FIRE DEPT. IN ST.ALBANS,WV AND I COLLECT FIRE AND EMS PATCHES, AND I WAS WONDERING IF YOU HAD ONE FROM YOUR STATION THAT YOU WOULD LIKE TO TRADE WITH ME. IF SO GREAT, JUST MESSAGE ME BACK IF NOT, THANX FOR YOUR TIME...MERRY CHRISTMAS AND HAPPY HOLIDAYS FROM STATION 22 Delete Comment

Cutelittlemedic said…
thanks for the video of MDA the little boy in the video the Goodwill Ambassitor for 2007 is my son's best friend. I also saw my son in some of that video that was cool. My son is the 2008 Ambassitor you guys will meet him this year. Wendy

nick said…
thanks for the add fellas

Nick Morgan said…
Hey guys (and gals?) Thanks for the invite! Do any of you know Grant McIntosh? I know he retired from Fairfax county a few years back. Stay Safe!