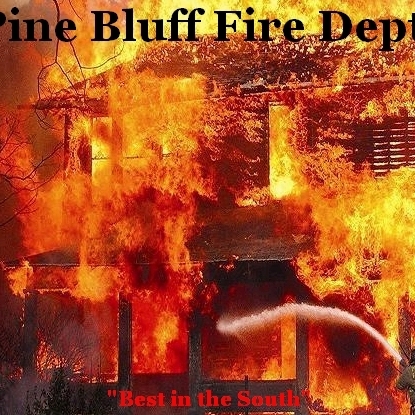 We are hands down the busiest little city in the state, and have been called one of the most aggressive interior fire departments in the south. The FBI ranks Pine Bluff, Arkansas as the second most dangerous city in America. For this reason we see just as many if not more fires then any other fire dept. in the state. Last year the P.B.F.D. responded to over 4,600 calls. (This number would be much larger if we responded to all medical calls in the city). 1,400 of those were fires, with 297 being working structure fires. The P.B.F.D. has one of the only fully equipped Haz-Mat teams south of Little Rock. We have an ISO Class-3 rating, and protect the University of Arkansas (Pine Bluff), and Southeast Arkansas College. All firefighters have a minimum certification of FF-1, FF-2, Haz-Mat Ops, and First Responders. Most firefighters are EMT’s or EMT-I, and Haz-Mat Tech’s or Specialists. The Pine Bluff Fire Department provides Fire, EMS, Rescue, and Haz-Mat service to the 55,000 citizens of Pine Bluff, Arkansas. The department has 91 firefighters, operating seven engine companies, two ladder companies and one chief officer 24 hours a day 365 days a year.

John Bierling said…
Hello Chief,
Please check out my web site: www.IncidentMT.com
Would you please send your email address so I can send some information about incident command training and responder wellness. Thanks, John
John@IncidentMT.com

Joe Totero said…
Thanks for adding me. Hope things are going good for you. Stay safe & take care.