Traffic Safety Cones... Do we all carry and use these? This photograph, although doctored up to show everyone running with safety cones does exemplify, in my opinion a convenient location to store traffic safety cones on your engine. Cones are no different than wheel chocks. Both are used for safety and to prevent something bad from happening... hopefully. 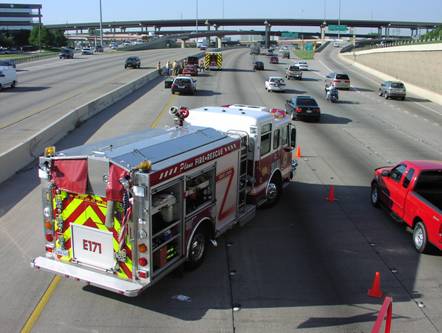 There are some givens, such as parking your engine diagonally, allowing both lane blockage and safe egress for firefighters exiting the emergency apparatus on the highway.

Some outstanding diagrams that are easy to read and use include the following examples: North Carolina DOT has developed a convenient Emergency Responder Reference Card 30 which provides a quick reference to how and where emergency vehicles should be parked at the scene. Tools such as these are extremely helpful as a reminder especially for new first responders or when there is confusion in the field.

Unfortunately, even if you have cones out, traffic flares, lights, the works, even professional bus drivers end up not paying attention and hitting parked emergency vehicles actively involved with extinguishing a vehicle fire. The NTSB that investigated this fatality incident provided this graphic showing the departments use of safety cones, apparatus placement and specifics about the incident. 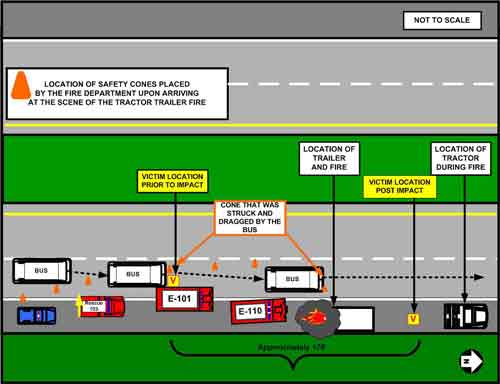 The conclusion for the after accident report in regard to the fire department was the following:

Department SOPs included highway response procedures; however, a more clearly defined description of procedures for responding to highway incidents would be beneficial to enhance the safety of all emergency responders working at the incident scene.

I personally have been close to getting hit on highway responses during my career understanding that if I did get hit, legally, I was the one causing the obstruction or hazard, and typically, even though I would be dead, the citizen would get away with killing someone. I choose to not be a statistic and recommend even with orange safety cones to have situational awareness to make sure you come home. Watch out for one another because the general public sure won't. How often do you note folks driving by an accident scene and not moving over a lane? I rest my case.

Honest answer no we don't carry them on our apparatus. Why you ask because it might cost us money to make things safer for our firefighters, it has been brought up, just trying to justify it to the old guy network is a problem so looking for creative solutions to make it happen. we run about 75% medical 20% mva and 5% fire so they make sense to a lot of us just not the majority who have been here for a long time. Trying to get our highway garage to provide them to us at a discount or free just takes them a bit to see if they can. I do like to thank you for the link Captain, another part that I will be using the next time we try to justify the expense of buying them outright. As far as the storage goes that is the perfect place for them with the exception that it blocks the tail lights on the drivers side of the apparatus.

Permalink Reply by Mike Schlags (Captain Busy) Retd on December 13, 2011 at 1:04am
If you look closely, there is a fire helmet on top of the cones that come up just below the left tail light assembly. My goal here was to basically do the homework for others that don't have these. Consider having a service club donate the funding or boy scouts. This is an inexpensive way to provide highway and road safety. Your road department should be able to turn you on to at least three, which in my opinion is the minimum for an engine company. Besides, commercial vehicles are suppose to have highway hazard devices like reflectors, or cones, right?

The answer is yes Cbzy,

I personally like them on front bumper, cut a hole the diameter of the round base of the cone and put the cone in the hole upside down, and the stack them all in that way, Nothing sticking way up high.

@ BigO -  PWD should have tons of these and they should be able to provide you with them for free. The problem is most likely "tradition" and some older guys do see the need to have them because "we never have needed to before" that's crap.

But to the one's who do, do you carry enough for the posted speed limits in your district. How many carry enough to create the transition taper and lane reduction past the accident? We carry 16 traffic cones on rescue and 8 on the engine.  How many carry the NFPA Fluoroscent TriPod sign announcing "Emergency Scene Ahead" for advanced warning?

I actually did a radio show on this very topic last month. Heres the link.

We have roughly four to six cones on each of two Engines, as well as our Quint.  In addition, we have roughly an additional 20 on our Miscelaneous truck for lane reduction requirements.  We do also have the NFPA Flourescent Emergency Ahead signs.  They are fantastic, and really work well.  The trick is remembering, or directing someone to set them up.  We are pretty good with it on extended calls on the interstate or state and county roads that run though our district.  But I think there have been many cases where it would have been advantageous and important for us to have utilized them more effectively in other circumstances as well.

Great topic for discussion.  Very important.  Thanks for the links fellas.  I will be checking them out!

BZY Yes, we carry 8 per engine. Our local PD's carry 5 or 6 in their cruisers as well.

We have 12 on every truck and another 50 in the garage that can be brought out to a scene if needed.

The rule of thumb for us:

Poor visible conditions or wet/ice conditions- set them up on a 2:1 (For a 100 km/h speed limit, the cones are placed for 200 metres)

All of ours include the hi-vis reflective tape as well so they can be used for day and night operations- much safer... All vehicles are also equipped with a set of 6 e-flares, with alternating red/blue leds

These can also be mounted on the traffic cones (as oppossed to the base) and also can be clipped onto members who are doing traffic direction for extra visibility. 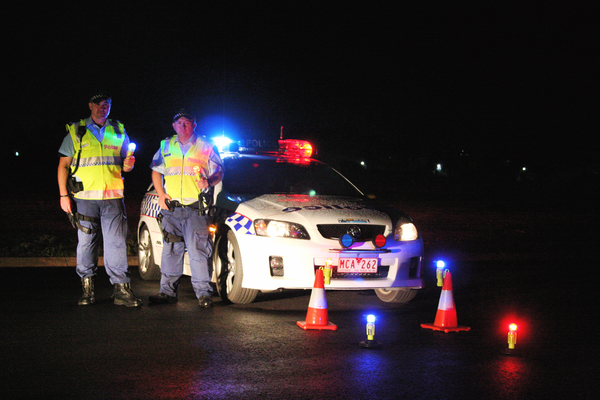 Permalink Reply by Mike Schlags (Captain Busy) Retd on December 13, 2011 at 5:23pm
Nice Australian cones... and blue lights. Why don't we do this?

Not to threadjack here but, if we're talking about road safety,  from here

One of the key issues discovered from the USFA Emergency Vehicle Safety Initiative was the disorientation of motorists caused by the day and nighttime use of emergency warning lights. This finding led USFA to enter into a research partnership with the Society of Automotive Engineers (SAE) on Non-Blinding Emergency Vehicle Warning Lighting Systems.

Supported by the U.S. Department of Justice Office of Justice Programs, USFA worked with SAE to study motorist disorientation caused by emergency warning lighting and lighting effects on normal, impaired, and drowsy drivers (also known as the "moth effect").

I may only be a fire photographer (Volunteer) but with my paying job having me on the road all the time and me also being a storm spotter (Volunteer), I not only have Amber LEDs on my vehicle for warning motorists but I also carry traffic cones.

I carry 4 regular cones and 4 pop up cones. I look as it as at least it is safer than nothing at all.  I have used my light numerous times on the side of the road and have already used the cones twice in the last 2 years.  Once to block the shoulder for a cop car in the ditch partially and the other to block the road off where the LDH was going across connecting to the hydrant at a structure fire.  You never know when your going to need them.  AND YES, triangles or cones or flares are required on commericial vehicles operating on state and federal highways in my state.

sounds like you put yourself in positions of danger with the storm spotter activities. what are you thinking Ron? are you out of your mind, especially when dealing with tornadoes... um... got room for someone to ride shotgun? :D 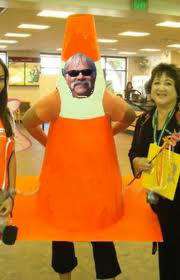 Ok Chief Threadjack, I see how it is... You are welcome to hijack any of my threads jack. You know I'm not going to get all jacked up about it.

But... what I want to know, and have you comment on is the lack of anything negative when dealing with our tried and true orange safety cones. Hmmm?

One thing for sure is that the orange traffic safety cones are designed to be abused. 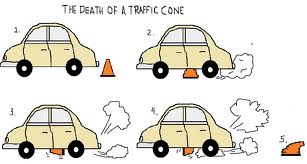 Luckily, they are always available...