WASHINGTON (AP) -- The Obama administration wants to cut almost in half a benefits program for the families of slain police and safety officers.

On Thursday, May 7th, the White House released the appendix for the Administration's Fiscal Year 2010 budget proposal, detailing requested funding levels for programs and offices in the federal budget. The Administration initially released a blueprint of the $3.6 trillion budget in February, giving a snapshot of the President's spending plan.

The Administration has proposed funding the Staffing for Adequate Fire and Emergency Response (SAFER) program at double the level it was funded in FY2009, increasing funding to $420 million for this crucial program. The United States Fire Administration (USFA) also receives a modest increase of approximately $600,000. The State Homeland Security Grant Program receives the same level of funding as FY2009 ($950 million) and the Urban Area Security Initiative (UASI) receives a $50 million increase.

Unfortunately the Administration proposes funding the popular FIRE grant program at only $170 million - a cut of nearly 70% from Fiscal Year 2009. The program, which received $3.2 billion in requests in Fiscal Year 2008, provides funding for critical equipment, training, and apparatus directly to local fire departments. The program also provides grants for fire prevention and safety programs and firefighter health and safety research.

While the Administration's budget proposal is meant to serve as a guideline for federal spending, Congress will ultimately determine funding levels for these programs. The House and Senate Appropriations Committees have begun work on crafting Fiscal Year 2010 spending bills. CFSI has reached out to members of Congress regarding the budget proposal and will continue to provide updates as the appropriations process moves forward.

The Fiscal Year 2010 Budget Proposal and Appendix can be obtained from the Office of Management and Budget (OMB).

The Justice Department insisted no one would lose benefits. 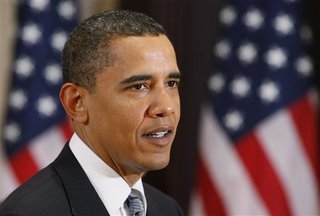 President Barack Obama speaks about the fiscal 2010 federal budget, Thursday, May 7, 2009, in the Eisenhower Executive Office Building across from the White House in Washington. (AP Photo/Charles Dharapak)
"Any family member who is eligible for benefits under this program will receive them," said Justice Department spokeswoman Melissa Schwartz.
Budget documents say the reduction is being made because "claims are anticipated to decrease," apparently because the number of officers killed in the line of duty has been decreasing.

The proposal is being made just days before Attorney General Eric Holder is expected to attend ceremonies in Washington honoring slain officers.

"It makes us kind of nervous. While we aren't panicking, it certainly has increased our concern, coming a week before National Police Week," said Suzie Sawyer, executive director of Concerns of Police Survivors, a group taking part in next week's events.

Sawyer said as long as the number of police and safety officers killed doesn't increase too much, the amount of money offered in the budget could be enough. And she noted that in the past, the government has found more money for the program when it needed more, such as following the Sept. 11, 2001 terror attacks.

The program pays benefits of more than $300,000 to the survivors of a safety officer killed in the line of duty.

There were 133 police officers killed in the line of duty last year, the lowest amount since 1960, according to the National Law Enforcement Officers Memorial Fund.

The group said killings of police officers are up 21 percent so far in 2009, compared to the same period the year before.

Permalink Reply by Chad Furr on May 7, 2009 at 9:44pm
Ok let me see if I got this right. Cut funding for equipment and saftey and death benefits. But hey lets give everyone more money to hire new ppl when the trained ones dies cause they didnt have what they need. Feel free to correct me if I am wrong.

Permalink Reply by FIREHIKER on May 7, 2009 at 10:33pm
*****when I try to share this story by copying the link, it redirects to a home page. the people I am trying to share this with are not firefighters, they won't subscribe. Is there an alternative way to share the article?*****

Permalink Reply by Firefighter Nation WebChief on May 7, 2009 at 10:42pm
The link is:
http://www.firefighternation.com/forum/topics/obama-proposes-signif...

Permalink Reply by Michael Stone on May 7, 2009 at 11:07pm
Gee, lets not help our already budget tight fire departments, I guess now they are going to treat fire departments like non-transport rescue squads. I think it is sad they are going to cut the funding for a wonderful program, although I really wish it would include non-transport rescue squads too!

Permalink Reply by Trainer on May 8, 2009 at 6:53am
Does anyone have information on say the last 2 years of the safer grant? Or where I can look it up? I’m a little curios as to how much was requested by departments. I doubt if you can find how much was turned down but to me this program is just a bandage as ultimately the city has to start paying anyway. It would also be interesting to see how many FF’s were retained after the 5 years and did the numbers actually grow, which I believe was the purpose, or were they just using the funding to replace retirees. I’m sorry guys but I have to say it; I smell a rat…why would they cut a program, 3.2 billion requested for what 500 million that benefits all and double a program that only benefits a few.

Permalink Reply by frank barresi on May 8, 2009 at 7:02am
Whoa brothers and sisters! They've pulled this before. As the article stated, Cogress will decide what the actual funding will be. If past practice is any indication the money will be brought back up to near or over the level it was last year. After the speach VP Biden gave at the CFSC dinner they would be commiting political suicide if they cut this as much as stated. Of course an email, call to your reps in Washington won't hurt either!

Permalink Reply by W Anderson on May 8, 2009 at 9:04am
Yep, I am one of those "firefighters for Obama" voters. I believe there is a couple trillion deficit to get rid of, all programs are going to be touched. Let's bring it down to the local level. I don't know about your department, but our county exec tasked all departments with cutting 10 percent from their budget. Notice that was all departments. He didn't say every department except fire and rescue! Yes, I agree with you, this is the reality. Your more than welcome to blame Obama; human nature says we need to blame someone, might as well be the president. I would be the first to tell anyone, I don't get paid enough for the job I do, and I have not had a pay raise in the last three years, with COLA adjustments that were less than inflation. But that is not why I continue to do this job. Simply, I hope, like you bob, I love it.....money second. If anyone can't live with budget cuts in the fire service (as unpleasant as they are) they are in the wrong line of work. So, bob, my brother, I don't feel stupid.

Permalink Reply by Kyle D. Hill on May 8, 2009 at 10:34am
Mr. Barresi, you are correct! In the political arena, a lot of "maneuvering" takes place that we don't always understand. I am in 100% agreement with all of you....DONT TAKE OUR FUNDING! But, I'm also willing to let this play out. There is much that must take place before AFG gets cut. We must first see what kind of support the President is getting on this issue. Remember, the IAFF heavily supported the Obama/Biden campaign and I'm not so sure that they are willing to turn their back on us that quickly. Vice President Biden was quoted as saying that there are 3 political parties in Washington D.C., Democrat, Republican, and FIREFIGHTERS! Our voice is loud, so lets just watch this unfold before we "throw the baby out with the bath water."
As firefighters, we deal with things in a RIGHT NOW fashion. Washington D.C. is completely different than what we are used to and works in an entirely different manner.
I can understand the PSOB cuts, as long as those that SHOULD be paid, ARE getting paid. If we need more money in that fund, it means we're killing more firefighters and we need to look longer and harder at what is causing those deaths. As it is, we need to be looking at it harder! Are we?
The AFG is funded pretty well this year and I find it very hard to believe that it will take that big of a hit next year. That being said, get involved! Don't let our side of the story go untold.

Permalink Reply by Mick Shelley on May 8, 2009 at 10:44am
This reminds me of a broken record that seams to skip right back to where it left off
It's called politics as usual. All I can see, is that we are in deeper shit then ever before.

Permalink Reply by Mike on May 8, 2009 at 11:07am
My response may seem duplicitous but while I am saddened that the grants are being lowered I wonder why we expect Uncle Sam to fund local issues all the time? This mindset is nothing more than municipal welfare and someone needs to say ENOUGH. Can't afford the new ambulance or fire truck, perhaps you need to consider a local fundraiser over a couple of years or maybe build in some service fees into your budget to allow for the funding to come from the expansion of municipal housing and business (I do realize both are contracting currently, btw). The federal government needs to stop funding local issues and requiring 'unfunded' mandates...its not different than me living on my credit card for expenses...my upkeep becomes my downfall. Don't get me wrong, I am NO FAN of the BO administration, but let's be grown ups and figure this out now because its not going to get any better any time soon and the gravy train has to stop. We are responsible at all levels for allowing this situation to occur because no one will say NO to the illegals overburdening our healthcare, jails, and public assets, NO to shipping our jobs overseas by reason of the prohibitive corporate tax policies, and NO to government being the solution for every problem! We've been duped into believing that this money should just be spent because its in the 'budget'...its past time to say 'NO'.