As dictated by Fire Department policy, a formal and detailed investigation is underway to determine the exact nature of the cause of injuries sustained, as well as the precise cause and manner of the Firefighters death.

The men and women of the Los Angeles Fire Department thank you for your kind words and sentiment at this time of overwhelming sorrow and immense loss.

The Allen Family and the Los Angeles Fire Department has received a tremendous outpouring of support during this difficult time. Your Firefighters wish to thank you and express our deepest appreciation for all the kind words and gestures that have been provided.

Farewell Brother Glenn and condolences to the family.

Permalink Reply by Firefighter Nation WebChief on February 18, 2011 at 6:50pm
Sad...awaiting birth of grand child according to the NBC report

Permalink Reply by Julia Miller on February 18, 2011 at 7:39pm
I can just about type through the tears that I have when I first heard of this incident. I knew thngs weren't good when they trauma/surgeon said "Next 48 hours will be critical". That is usually not a good omen having worked in trauma as long as I did. Then when I heard about the fact that he was awaiting the birth of his first grandchild any day, I just lost it, pretty much as I have all day.

Sad day for LAFD, sad day for LA Co FD who had two injured firemen and just sad day all around. The fact that it is raining here is telltale. It is like the heavens are crying for Glenn and his family both his physical family and his family at the firestation.

Please guys, please all be safe out there tonight and on every night. God bless you all and May God have Mercy on Glenn's soul and welcome him into the arms of heaven. He did a job well done.

Permalink Reply by Mike Schlags (Captain Busy) Retd on February 18, 2011 at 7:47pm
For those who have not taken the time to listen to the audio tapes provided by the FFN Webchief, I strongly recommend that you do so to fully understand the level of professionalism exhibited by the Los Angeles City and County Fire Departments. What appeared to be a bread and butter single family residential fire ended up being a mega-mansion that was three-stories, 6,000 square feet, was perched on top of the Hollywood Hills with a hidden danger that now we learn has taken the life of one of our brothers. One thing about LAFD is that when there are lessons to be learned, they have always been forthright in sharing what they learn and how to prevent it from happening again. Many of the fire codes we have today are a result of incidents handled by the LAFD and their lessons learned. This incident will be no different. Until we hear official word as to what happened and how we might learn from this, you can appreciate now what the first responding units saw and experienced through listening to the audio transmissions and local television news coverage. 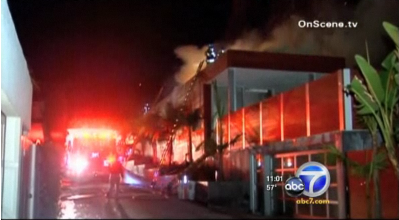 Take a look at what roof you can see in the photo above... the attic space is minimal with this flat roofed structure. Who would have ever thought that the fire had overrun the sprinkler system, melted the sprinkler pipes and filled the entire attic footprint with water, and all before the fire department ever arrived on scene. They literally were ambushed by a hidden danger disguised by a drop ceiling. Photographs taken the next day validate this observation. Look how little attic area actually exists. 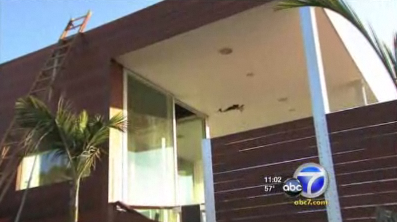 Listening to the FFN provided audio transmissions from the incident, you learn that the fire started on the outside by a fireplace that communicated with the interior of the structure, making runs through the walls. As the fire intensified, the fire then made it's way into the attic, which prompted interior operations folks to request extra long pike poles to gain access into the attic through holes created in the ceiling. No one expected a large section of ceiling to drop under the weight of an unknown quantity of water.

One can surmise that their was significant structural damage from this event, which indicates that even though there was not a narrow attic area, the surface area was huge, containing a lot of fire sprinkler water that was free flowing through an unlimited public water supply. The priorities were identified immediately to gain access to the attic by pulling down the ceiling using pike poles. What firefighters did not know was the weight of the water was going to cause a structural collapse of the ceiling, with some of the firefighters being directly below. It caught everyone by surprise... The 33-minute audio tape reveals what professionalism and top notch training produce, which is a competent fire officer that acts appropriately and "professionally" under times of significant stress. You have to remember that there was a massive structural collapse that took out several firefighters. The company officer never missed a beat, repeating "Emergency Traffic" three times and then simply stating that there had been a structural collapse and firefighters were self extricating. No frills, no emotion, just what happened. You could tell that everyone went into autopilot, with RIC teams engaging, LAFD Rescue Ambulances (RA's) already being in position, standing by... just in case... and they were on it. Everyone was spot on with immediately locating the downed firefighter, freeing him from the rubble, administering on scene ACLS, successfully resuscitating the firefighter and transporting him to Cedar Sinai hospital. Everything suddenly went very wrong, but LAFD had a plan in place that was immediately put into place by the Incident Commander (Battalion 18).

Other things that you don't want to forget when dealing with this type of incident is done step by step...

The outcome of this incident was incredibly tragic. I only hope that we can learn from this and prevent it from happening again.

Permalink Reply by Russ Marks on February 18, 2011 at 8:53pm
It is a sad day in California, first a young CHP officer was killed in a traffic accident and now we have lost one of our brothers from LA. Our prayers are with injured, the families and our brothers and sisters of LAFD, LACoFD and CA CHP

Permalink Reply by Mike Schlags (Captain Busy) Retd on February 20, 2011 at 8:07pm
Los Angeles Times / FOR THE RECORD: An article in the Feb. 19 LATExtra section about the death of Los Angeles Firefighter Glenn Allen said that Allen's funeral was tentatively planned for March 4. According to the Fire Department, his funeral is scheduled for Feb. 25 at the Cathedral of Our Lady of the Angels in downtown Los Angeles.

"I don't think any of us as firefighters would expect such a catastrophic failure of ceiling," city Fire Chief Millage Peaks said after announcing the death of Glenn Allen, 61, an L.A. firefighter for more than 36 years.

Allen, who was less than two years from retirement, died at Cedars-Sinai Medical Center. His first grandchild is expected to be born Saturday.

When Allen and dozens of other firefighters arrived at the scene, the fire was blazing across the attic of a house in the 1500 block of North Viewsite Drive.

Running through the attic were plastic pipes for fire sprinklers. The fire melted the pipes, flooding the attic and filling the insulation with water, Peaks said. The weight of the insulation appears to have led a large section of the ceiling to collapse, injuring Allen and five other firefighters.

One of the firefighters was still hospitalized Friday with a broken ankle, but the others had been treated and released, Peaks said.

When the ceiling collapsed, Allen was covered with debris. Rescuers used a chainsaw to reach him. When they found him, he was not breathing and his heart had stopped.

The newly built three-story house was 12,500 square feet, according to Peaks. The Fire Department was continuing to investigate the cause of the blaze on Friday. But officials said it seemed to have started around a fireplace, then raced up the walls to the attic and spread. A couple who had been sleeping upstairs escaped without injury.

"It was just a tough, tough battle," Peaks said.

David Lara, a spokesman for the city's Building and Safety Department, said investigators hoped to have preliminary findings next week on whether design and construction issues might have had anything to do with the ceiling collapse.

Allen's funeral is tentatively planned for March 4 at the Cathedral of Our Lady of the Angels in downtown L.A., Peaks said.

Mayor Antonio Villaraigosa ordered city flags lowered to half-staff in Allen's honor. In a written statement, he called Allen "a fearlessly committed firefighter who dedicated 36 years of his life to protecting the people of Los Angeles."