The 24' ladder often comes up short depending on grade/roof pitch. (Probably would make this specific example) The 35' is a beast at this angle. The pitch is dangerous and downright deadly below freezing.

Any suggestions? No obvious discussions in history. 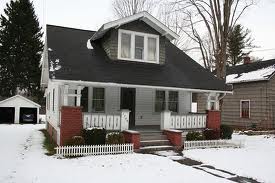 (The picture I found online but suits example well; some of the dormers are farther back and pitch is around 8-10 on 12)

Are you just talking about a ladder to the window for egress, or are you talking about working off of it? Given the example, but also in general, it depends on a 360, you may have a window on a side where you don't have to ladder a dormer. Looking to vent, one should be able to do so from the ladder using a pike pole. If it is a rescue situation, on may be able to throw a ladder to the eave and perhaps a roof to the window if needed.

Not a bad idea to look into and discuss, always a good training in size ups, etc.

Egress was my concern. Have a whole neighborhood of these homes and was thinking ahead. Ventilating the window might be able to done with the ladder tip if necessary.

But you are on exactly the right track with the roof ladder in the window. First thought I had. Will it work easy enough? I hope we can try it sometime in practice. Probably a good plan A, what about plan B&C? Be great to hear someone that has had first hand experience.

Permalink Reply by capcityff on November 1, 2011 at 10:08pm
I don't even understand the question.

Also have to consider primary point of entry? May not want to set the ladder right in front of them stairs? (Referencing the example given.) Just thinking out loud.

This house resembles some single families in my area. There are 2nd floor windows on sides B and D too.

I would place ladders to the windows on sides B and D, and two ladders to side A on the left and right sides of the front porch stairs.

I think that is the point here.

Perhaps not this particular picture, as the OP stated, but the idea of such dormers being set back from the eaves, especially with a steeper pitched roof.

Now, a 360 should determine the best route for an egress window, but I can agree with the OP here in looking at "what ifs" as well and how can you solve the problem if a FF does choose such a window to egress from. A steep ground ladder, heeled with a FF, may not be the best/safest, but should get the job done at a steep angle. However, say you only have a couple roof ladders left and you need to get something there, why not look into the idea? Personally, i don't see where such a concept wouldn't work.

So if a firefighter or civilian is hanging out the dormer window you're going to instruct them to go to another window?  You end up doing whatever needs to be done.  And since the dormer is a bedroom there is a very good chance that you're going to have someone in there if it's night time.

Throw a 24 footer up to the dormer window and match the angle on the roof (it's a 12 pitch and yes the ladder is going to be steep).  If the sidewalk is gravel (can't tell for sure) you can foot the ladder with a halligan driven into the ground.  If it's concrete (or the ground is frozen), tie off the ladder to the porch posts on either side of the stairs. It's not going to go anywhere if it's properly tied off.  So what if the ladder is in the way of the front entrance, that shouldn't keep you from doing what has to be done.  You're making a rescue, not painting the house.

I think the bigger problem here is not whether the dormer window is accessible but that some people are too locked in to what is supposed to be the "right" and "wrong" things to do.  If you approach this house saying 'well it's too steep to ladder', or 'it's in the way of the front door' or 'the angle of the ladder will be too steep and dangerous' then you may want to re-think the job.

If the 24' ladder comes up short of the dormer window laying flat on the roof; what other options can you suggest small oher than the aerial or longer ladders?

Very narrow dead end streets up to 1000' long.
Homes barely above grade in most cases.
Small town USA. Lots of older folks, never enough volunteers for the initial response tasks.
Only concerned with FF Access to this 2nd floor A side window only. Just because it is a unique layout. Rescue, egress, whatever, just need to work at this window safely w/o an aerial of any kind.
Other homes also have this dormer window with a shed style toof meaning it follows the roofline of the main house versus the gabled dormer pictured.

I wasn't thinking up and over originally because of the shed dormers but great thought. My original concern was that the roof ladder hooks won't hold inside the window for sure; how do you know for sure what's inside the sill. And if 2 people get on this ladder yikes.

Good info. Alot of what ifs. And thanks I've never been refered to as "fuzzy":-/

Thanks for the feedback.

The 'fuzzy' comment was in regard to your somewhat telegraphic manner of writing.

Regarding access, if this is a typical SFD in your area you won't have any problem accessing the dormer window with a 24ft extension laying flat on the roof. Following the pitch of the roof you would make the ridge easily with a 35 footer.

Whether it's a FF bailing out the window or passing a victim out, the only really effective way to accomplish it is to have the ladder on the roof in front of the window.

As I mentioned earlier, tying off to the porch posts will secure the ladder.  Failing that you could try and pin the ladder to the roof by driving the pick end of a halligan into the roof with the duck bill off to the side, over the rail.  Never tried it but it's something to consider failing any other option for securing the ladder.

I suspect that a 10 or 12 ft roof ladder would work with the hooks over the sill.   But frankly it makes more sense to set up a ladder right in front of the window to be used for ventilation, rescue or bailout.  Otherwise you have to deal with stepping off of the main ladder (which STILL has to be set up and secured) and onto the roof ladder, back and forth and how do you deal with a victim or bailout?

Shed roof dormers will have a pitch but not the same pitch as the main roof.  A shed roof dormer on a 12 pitch roof will typically be around an 8 (or less) pitch.  There's really no reason to be up on a dormer roof for any reason.  If you need to vent you vent either off of the ladder or use the ladder to knock out the glass.

If the type fo dwelling you are referring to sits back further from the street than the one in this pic, my first choice would be to stretch our aerial ladder to the dormer for access and/or egress.  If we needed to ventilate, we would just punch through with the tip of our aerial.

If the house sits further back than this pic presents, we could easily reach the dormer window with a 24' extension ladder for ventilation, egress, or for a point of access.

If there is no "A" side access and we needed to ventilate, we could access the rear with a ground ladder and a roof ladder and then do an "up and over" technique.  This is where a member would gain access to the dormer roof from the rear of the structure, straddle the peak, reach over with a hook and ventilate the windows.

This type of 1930's residential is popular around here.  They have a doghouse dormer out front and a full dormer in the rear. Therefore the rear has full sized windows with a normal sill.

The question here I believe is will the 24' work. I use this same scenario in my truck company class. I use it to make firefighters think about what are they carrying on their apparatus. A 24' will most likely come up just short of a good positioned, "rescue" placement. The issue is pitch, to match the roofline the ladder needs to be footed well out into the concrete or paved walkway. Like 15' out. Therefore the 24 often will come up short.  This is a classic size up for truckies, as I ask them what is their compliment of ladders carried on their rig. They often carry a good assortment and a 28' footer will work.

For me, the front is covered by the aerial and the crew is throwing ground ladders on B/C/D.

I have some preplan pics of a regular 2 story colonial, for which a 24' will not get the job done due to the terrain, and construction.

I'm a little late to this one, but I agree with several of the earlier posters.

I'm with these dormer types on Cape Cod and similar house construction, as well as some of the 1930's - 1960's construction in a variety of cities.

If venting a 2nd floor set-back dormer, just use the roof ladder as a wall ladder, take a long enough hook, and vent the dormer windows from the ladder.

Usually the 24, fully extended will reach the dormer windows even if it won't lay flat on the roof pitch.  If it's a foot or two short - no big deal if making a rescue.  If the angle really is too steep, then just hook the roof ladder to the windowsill, as others have commented.  It blocks some of the window opening, but unless the window is very small or the vic is very large, it's enough to make the grab.

If on a shallow pitch with a long dormer set-back, you can take two or three halligan tools (or the smaller officer tool versions), space them up the roof, drive the picks to the hubs, and use the halligans as temporary steps.  It's not as safe as the ladder, but if the victim is immediately endangered, it can work.

Another trick is to place a ground ladder normally, spike a halligan pick into the roof, then use a Little Giant ladder or a stepladder as the roof ladder.  Those ladders generally are not tested to NFPA standards, but if no other ladder will do the trick...   Note that you usually must have a relatively short ladder if the roof space is less than 10 feet from dormer to the lower roof edge.