SOUTH BEND - The firefighting career of Jordan Jostes is over with the city of South Bend, but exactly how it ended is not clear.

What is known is that Wednesday morning, during the Board of Public Safety meeting, the board's members voted unanimously to end Jostes' employment by the city.

Board member Patrick Cottrell made the motion that the board give Jostes until 4:30 p.m. Wednesday to resign from the department, or he would be automatically terminated.

But Jostes did not attend the meeting to hear the board's decision and neither did anyone from the firefighters union.

At a hearing two weeks ago, Jostes and the union pushed back against an allegation by Chief Howard Buchanon that the firefighter had violated department rules against weapons by bringing a Bowie knife to work and keeping it under his pillow.

Jostes had claimed the knife was a tool, and union president Ken Marks testified that most of the department's firefighters kept a knife with them while at work.

But Buchanon told the board he pushed for Jostes' termination because the firefighter had already had two suspensions in the past year, with the knife incident being his third.

Although safety board members voted in open session to terminate Jostes, they did not discuss their reasons for giving him the option of resigning.

But after the meeting, Todd Skwarcan, vice president of the firefighters union, said he, Jostes and union lawyer Chip Lewis met with Assistant City Attorney Tom Bodnar the day before and that Jostes had already resigned at that meeting as part of an agreement brokered by the union.

But the board apparently rejected that agreement and made the vote for Jostes to resign or be terminated, a move Skwarcan called "unbelievable."

Bodnar did not return a late Wednesday phone call, and it's not clear if Jostes resigned or was terminated.

Regardless of how he left the department, Jostes' future is already known.

At his earlier hearing, Jostes told the board he had joined the Marines and was leaving for boot camp in October, for what he said was the start of a four-year commitment.

Permalink Reply by Brian Dumser on September 20, 2010 at 11:02pm
As an Army veteran myself, I'm with you on this one Tony. Having a knife under your pillow while on-base would be crazy, having one out in the field while you sleep is totally acceptable. ANd since when do we keep our tools under our pillows? I'd really like to get the full story here. Stay safe!

Permalink Reply by Daniel Luechtefeld on September 20, 2010 at 11:25pm
RJ, as a 15-year US Army veteran I can tell you that - unfortunately - "gang member" and "military" are not necessarily exclusive terms.

Going all the way back to the '80s, various combat units to which I was assigned had members of the Crips as well as white supremacist organizations. The gangs highly value these personnel for the skills and self-discipline they bring back with them after leaving the service.

At the time this was all confirmed by a friend who was assigned to Army CID; now it's the FBI confirming it:

Permalink Reply by Fabulous Heather Days of Summer on September 21, 2010 at 12:01am
hiding it probably caused them more stress than if he just layed it within reach in plain sight

how sad that it had to come to this

Fear is a terrible thing to manage

Permalink Reply by Daniel Luechtefeld on September 21, 2010 at 12:03am
A point of summarization:

1. The armed services are not overrun by gang members; gang bangers remain a tiny fraction of US forces. However....

2. Gang membership is higher in the armed services than it is in the general American population.

Permalink Reply by Fabulous Heather Days of Summer on September 21, 2010 at 12:14am
... AND several of my friends sleep under their beds... with their weapons !

but where I live people will drive by your house and shoot it up... just for fun... and sleeping IN your bed just may end up getting you killed

there are parts of town that I can not enter even in the broad daylight because it is so creepy with illegal dangerous activity - if this young man came from that neighborhood, his perception of reality may be different from the norm ??? His perception of being safe while sleeping may also be outside of the norm ?

A bowie knife under the pillow? I guess there's some trust issues????

Permalink Reply by Vic Silverfish on September 21, 2010 at 4:37am
I'd love to know the specifics. It sounds like this guy was too squirrley for the fire service, I can't imagine him going to the Marines.

The phrase "bowie knife under his pillow" does leap out at me. What exactly is that? I think it's practical to carry a blade, I prefer a folder that I can open with one hand. I've learned that in some countries that is illegal, so I'd go with a (small) straight knife instead. Who knows. If he is 20 and already has two suspensions, I think I see a trend.

Permalink Reply by Oldman on September 21, 2010 at 7:28am
Would keep those pesky mice at bay, or is it blow them into the bay?

Permalink Reply by lutan1 on September 21, 2010 at 7:37am
Got it figured out- it's a fashion accessory. How silly of us to assume anything else... 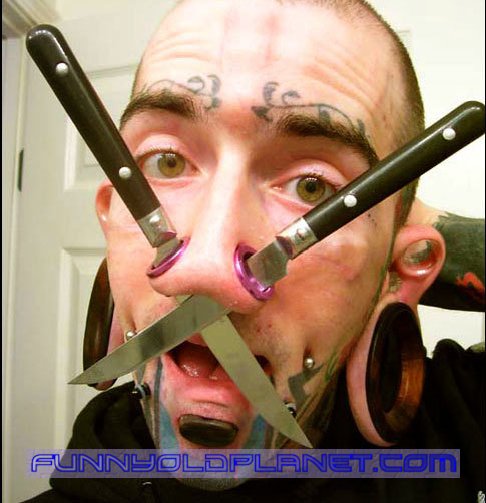