Missy said…
hi there,
sorry i didnt get ur text but u didnt have my current number and i didnt even know you were going to be a dad, who what when and omg, terry and i arent together anymore and i dont talk to anyone much anymore u can catch me at crazylove0909@yahoo.com

Missy said…
hey there, sorry that it took me so long to get back to u , i miss talking to you, hope all is well, keep in touch at crazylove0909@yahoo.com love ya always bro

Lou Sclafani said…
I just created a new group here on FFN, SnowSkiingFirefighters and thought you might be interested in joining. Would love to have you.

adel said…
hope you have a merry christmas

Missy said…
Hi there , just wanted to drop by and sya hi and that I WILL GET TO YOU AND KICK YOUR BUTT , FROM THE ORGINAL BEAR AND DONT YOU FORGET IT ,LOVE YOU ALWAYS YOUR SIS

Jennifer Anders said…
Thanks you too!

Today we have said goodbye to a wonderful and dear friend, a sister, and fellow EMT of mine. At her funeral, it was mentioned that Cecilia would rather have us lift our heads and know she is always by our sides, than to look to the ground and be sad. Today I have said goodbye to one of my probie's, a woman I am proud of and honored to call friend and sister. Cecilia Turnbough, you WILL be greatly missed and NEVER forgotten. In our hearts and minds forever more. 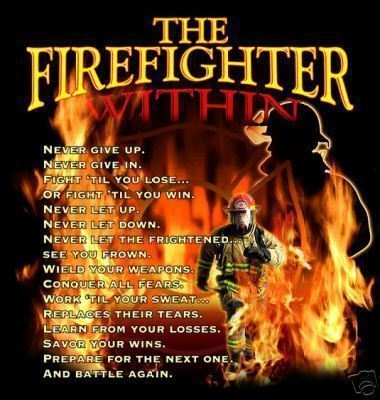 Be Careful - A 'heads up' for those men who may be regular Home Depot customers..

Over the last month I became a victim of a clever scam while out shopping. Simply going out to get supplies has turned out to be quite traumatic. Don't be naive enough to think it couldn't happen to you or your friends. Here's how the scam works:Two very hot 20-21 year-old girls come over to your car as you are packing your shopping into the trunk. They both start wiping your windshield with a rag and Windex, with their breasts almost falling out of their skimpy T-shir ts. It is impossible not to look. When you thank them and offer them a tip, they say 'No' and instead ask you for a ride to another Home Depot. You agree and they get in the backseat. On the way, they start undressing. Then one of them climbs over into the front seat and starts crawling all over you, while the other one steals your wallet.

Jeff Borra said…
man walks into a pet store and is looking around when he
> > spots a Chimpanzee in a cage marked, "$1000". The
> > man looks a little closer and discovers that the chimpanzee
> > is wearing a T-shirt bearing the
> > Maltese Cross and is cleaning a fog nozzle. Curious about
> > this, the man summons the storekeeper and asks him what the
> > deal is with this thousand dollar monkey. "Sir, You
> > have discovered our Fire Service Monkeys".
> >
> >
> > This one is our Firefighter version. It has a Basic
> > Firefighters certification with IFSAC seals, is also a
> > Licensed Paramedic, can perform vehicle extrications, high
> > angle rescue and is up to date on current CPR standards. A
> > very good value for a thousand dollars.
> >
> >
> >
> > The man is suitably impressed and moves to the next cage,
> > which is occupied by a gorilla - also wearing the same
> > T-shirt, but is gnawing on a pen and reading training
> > manuals.
> >
> >
> >
> > The storekeeper states, "Sir, You have discovered the
> > Captain model.This one has an Advanced Firefighter
> > certification, is capable of training the other monkeys in
> > basic firefighting skills, and can manage any emergency
> > scene. It can also type. A very good value for five-
> > thousand, Sir."
> >
> >
> >
> > Impressed, the man moves to the last cage. Inside, he finds
> > an orangutan, dressed in a white shirt and a tie, but
> > holding only a coffee cup. The man says, "What does
> > this one do that he's worth $10,000 ?"
> >
> >
> > The storekeeper clears his throat and says, "Ah, sir,
> > well, um. we have never actually seen him do anything except
> > drink coffee and play with himself, but he says he's a
> > Battalion Chief."
>
>

Jeff Borra said…
Thanks and you have a safe weekend also. did you know a Norman Hatcher or Kevin Lunford

Bee said…
Thanks for checkin my site out stay safe brother.
The Bee

How are you? Thanks for the friend request. I look forward to talking with you.