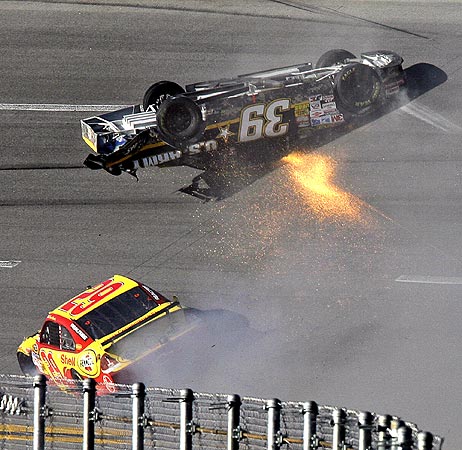 Playing it safe in the world's most dangerous sport.

Dover, DE (August 17, 2010)-- No sooner does the National Anthem end than you hear “Gentlemen, start your engines!” In a few short seconds the “home of the brave” becomes home to the world’s top racers. The noise is deafening, but that’s part of the adrenaline rush – the excitement of NASCAR.

As the field of racecars circle Dover's Monster Mile, just inches from one another, the roar becomes more intense as 120,000 fans come to their feet. Then the pace car drops down and charges toward pit road as the green flag waves. Heartbeats quicken as the machines move forward in a bumper-to-bumper rush and the drivers focus on the day’s mission. Pass the guy who’s holding the pole position.

On the 3rd lap, a group of concerned fans scream as others point to the turn #4. The cloud of dust and debris reveal that 2 cars have collided, smashing a 3rd racer into the wall and sending another spinning into the infield. The yellow flag comes out – and so does Dover’s Bravest – the men and women of the track's Emergency Operations Team. 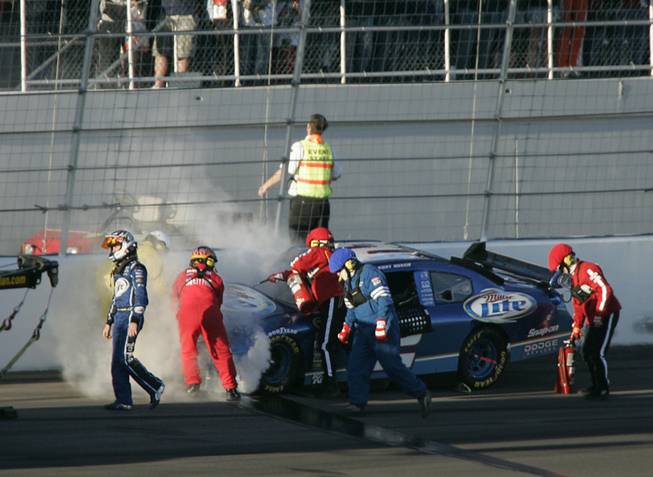 The safety team makes short work of the mess. In less than a minute two fires have been extinguished, 4 drivers quickly removed to safety, and wrecked vehicles moved off the track to allow debris to be cleared. In just 3 laps, the green flag signals the restart and the Fire-Rescue teams return to their positions, ready to do it all again.

Motorsports Safety starts long before drivers and teams arrive at Dover. It begins in the garage with the manufacture of the car’s chassis, where very special attention is given to the assembly of the driver cockpit. Following the tragedy that took the life of racing legend Dale Earnhardt, car owners and builders have focused on developing a super-safe cockpit with better restraints, increased head protection and the use of tough composite materials.

These new safety systems help protect drivers from serious crashes, but racing still has its risks – and wrecks. That’s why the Track Safety teams at Dover International Speedway remain vitally important to the racing program.

Each raceway on the NASCAR circuit manages its own special system for safety & emergency services. Some tracks contract out their fire-rescue and medical needs to private contactors, but Dover International Speedway operates its own fully equipped Emergency Operations Department, complete with response vehicles, high-tech rescue equipment, firefighters, rescue personnel, paramedics and support staff.

On the infield, at turn 4, is an inconspicuous red brick building, which serves as the track’s firehouse. Each morning, long before drivers and crews arrive at the track, fire-rescue personnel assemble at the station, pick-up safety gear and radios, are briefed by the Infield Track Services Supervisor and given their assignments for the day.

“Our fire-rescue personnel are hand-picked,” says Ed Klima, Director of Emergency Operations and Safety at Dover International Speedway. “All of our firefighters, medics, law enforcement officers and HAZMAT technicians have to meet nationally recognized standards before they’re accepted for special training.”

That special training includes an intensive 16-hour course, which builds on an emergency responders’ current knowledge, then expands it to include the unique hazards and dangers of motorsport racing. The students leave the course prepared to work as a cohesive emergency team whose primary focus is safety. 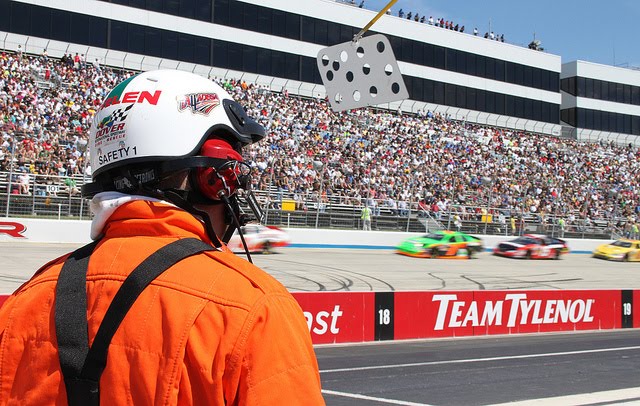 Chief Klima’s current safety crew roster reads like a who’s who in the East Coast Fire, Rescue and EMS, including highly trained rescue personnel from the FDNY, Philadelphia, Baltimore, DC and Wilmington Fire Departments. Add to the list dozens of emergency personnel who travel hundreds of miles from their hometown fire companies and you’ve got a department that rates #1 in anyone’s book. In fact, during race weekend, Dover International Speedway operates the largest Fire-Rescue-EMS agency in the State of Delaware.

From the moment the first drivers guide their cars onto the Monster Mile for practice runs, fire-safety personnel and equipment are in position, ready to respond at a moment’s notice. And it’s a quick moment, because speedy intervention is what keeps a bad situation from becoming much, much worse on the track. 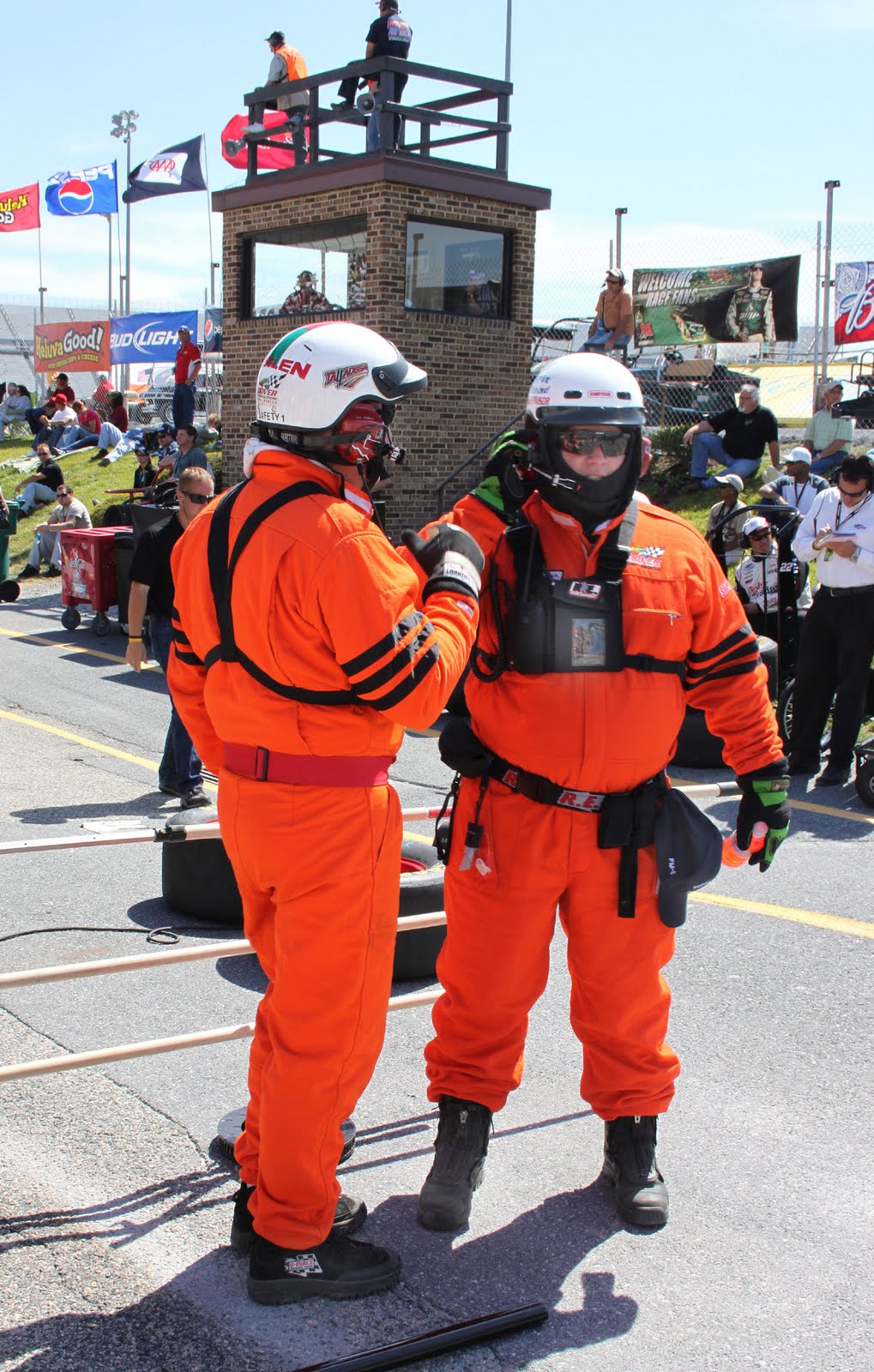 One of the first things you’ll notice about the Track Safety personnel who protect the drivers, pit crews and media, is that their protective gear differs from that used by conventional structural firefighters. The business suit worn by Dover’s firefighters are specific to their mission and include international orange Nomex/Kevlar ® jumpsuits, Nomex® hoods, leather boots, fire protective gloves and conventional racing helmets with 2-way radio communications.

Conducting fire-rescue operations on the Monster Mile doesn’t require the big rigs like pumpers and heavy-duty rescue squads. Instead, fire-rescue trucks on the track are small, lightweight and designed for rapid response. They carry a crew of 4 and are capable of reaching any point on the track within 30 seconds. There are four such crews standing by on the infield of the Monster Mile, one located at each turn. 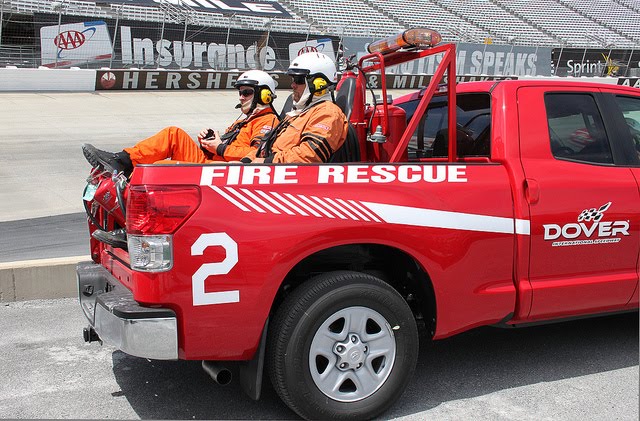 "Turn truck 2, one of four positioned along the raceway." (Lou Angeli)

“These ‘turn trucks’ (as they’ve come to be known) may seem small but they carry plenty of firefighting power.” according to Jack Wilson, the Infield Track Services Supervisor.

“Each truck carries 150 pounds of Purple-K dry chemical, as well as three 20-lb Purple K hand extinguishers that are by the firefighters’ side at all times.” explains Wilson, whose full-time job is as shift commander of Wilmington (DE) Fire Department’s Rescue-1.

Purple-K is and other dry chemcials has proven to be the most effective extinguishing agent in fighting flammable liquid fires, stopping a blaze 4 times faster than water, then smothering any remaining fuel. Each Pit Firefighter carries a 20-lb Purple K extinguisher which is armed and ready to smother a blaze whenever a driver makes a stop. Nearby pit road, is a conventional Class-A pumper which carries 1,000 gallons of water, in the unlikely event that a fire gets out of hand. 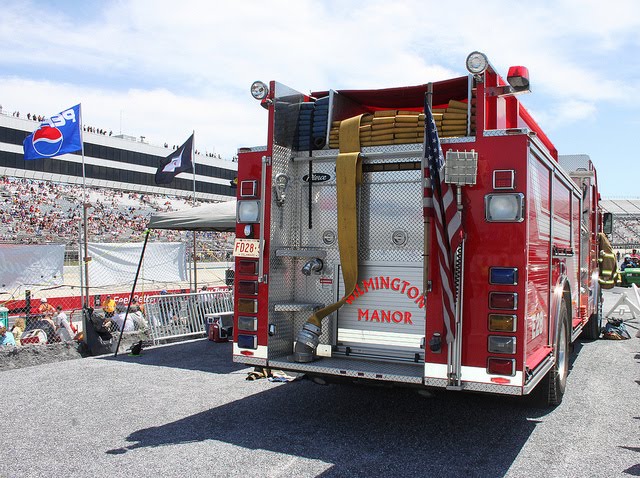 At turns 2 and 4 are special rescue vehicles, which carry a full range of power tools, hydraulic spreaders and cutters, capable of ripping through sheet metal, tubular steel and composite roll cage components. At Dover the rescue equipment of choice is manufactured by Maryland-based Holmatro, a well-known name on the motorsports circuit and in firehouses worldwide. 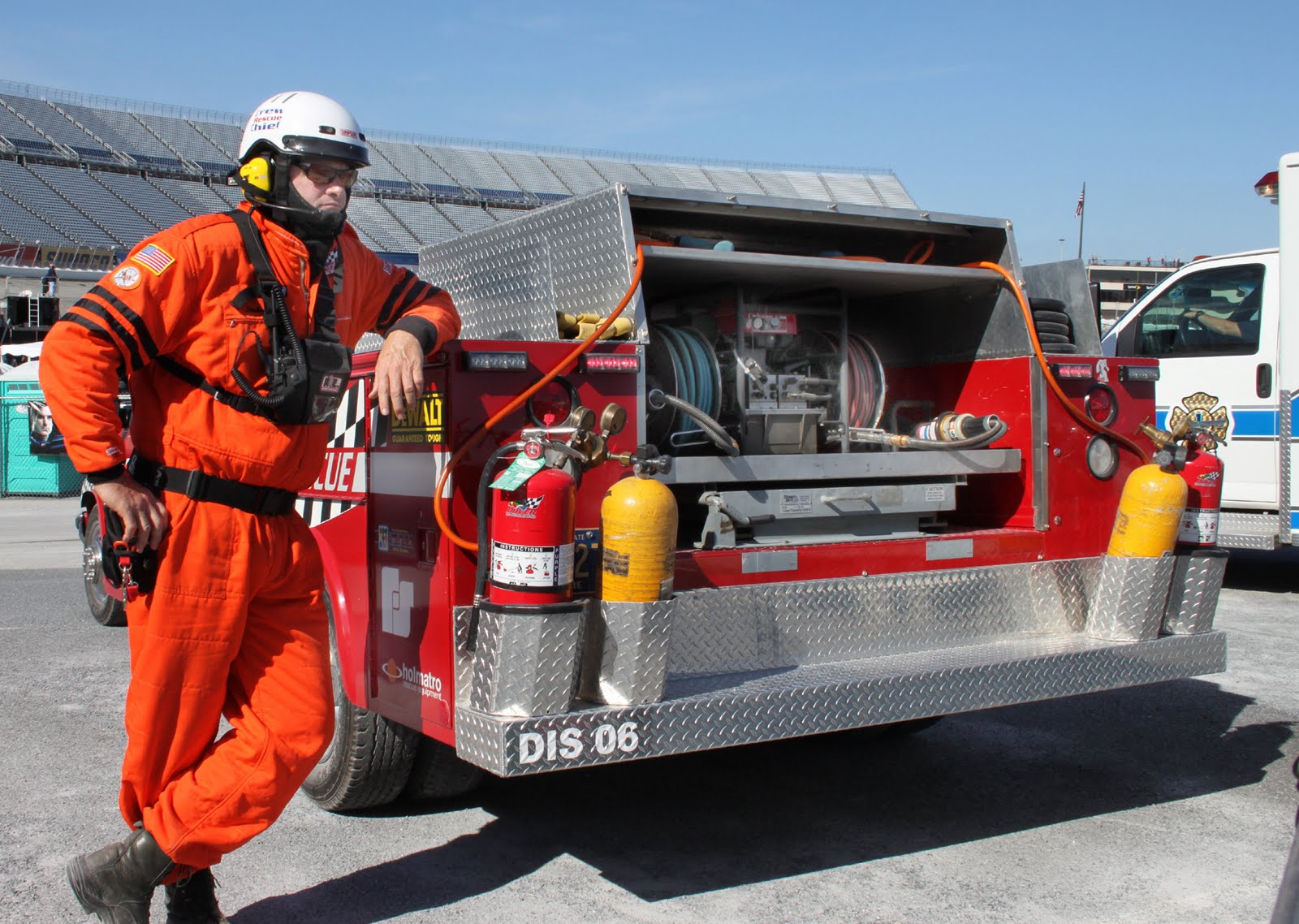 "One of 2 Rescue Trucks which carry extrication tools" (Lou Angeli)

During time trials, practice runs and each race, crashes which result in driver injuries means a trip to the track hospital, where physicians and medical teams do a full evaluation and stabilize the patient. Then paramedics move the driver turned patient to a waiting Delaware State Police MedEvac helicopter who is then flown to Christiana Care, Delaware’s Level-1 Trauma Center, for definitive care. 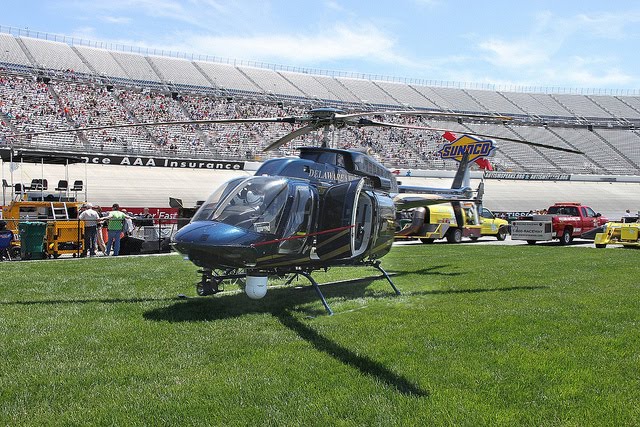 Track safety operations are certainly important, but it’s just a small part of the department’s larger mission -- to protect the city, which exists on the other side of the grandstands. Keeping order among the tens of thousands of fans and visitors is the responsibility of the Speedway’s law enforcement unit, made up of troopers and officers from throughout the state of Delaware.

One of the busiest emergency groups at Dover is the Emergency Medical Service. Paramedics and EMT’s staff nearly a dozen ambulances and specially equipped “Gators.” They treat hundreds of injuries each day ranging from a simple bee sting to life-threatening heart attacks. In all, Dover International Speedway employs nearly 300 professional emergency personnel all under the command of Chief Klima and his assistants, who operate from the emergency operations center. Don’t ask me where it is, because in this era of Homeland Security, Ed Klima isn’t telling.

Safety is not simply a buzzword – it’s a way of life at Dover. And many of the firefighters who work the track hope to convert their colleagues back home to NASCAR’s way of thinking.

“Municipal Fire departments should look to NASCAR as an example of a dangerous industry that does not accept death and injury as part of the job.” says Lynnbrook, NY Fire Chief Mike Chiaramonte. “Every member of a municipal fire department should be ingrained with the same safety ethic that is part of the NASCAR culture,” he adds.

Perhaps the best testimonial to Dover’s Fire-Rescue crews comes from a man who has circled the Monster Mile more than any other racer, Richard Petty, Jr. He’s been rescued more times than he cares to remember, and has a sincere respect for track safety teams. 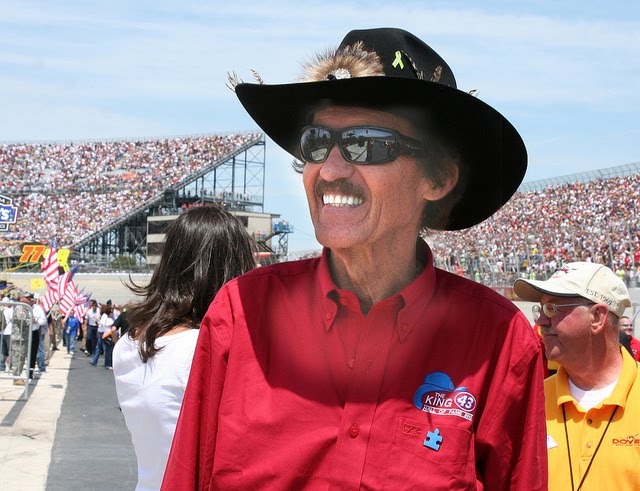 "Richard Petty Jr. has circled the Monster Mile more time than any other driver."
(photo by Lou Angeli)

“After a crash, and the driver finally is freed, the crowd always cheers,” Richard tells me. “The applause and cheers aren’t for the drives though… they’re for the rescue guys. And us drivers are cheering right along with the fans.”

The Fall 2010 race weekend at Dover International Speedway begins on September 24th and ends on Sunday September 26th with a special tribute to America's Fallen Firefighters.

Special thanks to the members of FirefighterNation's Motorsports Forum for helping during the research phase of this story, which will appear in the official Fall 2010 Program. (Lou)