On this day in 1947, the largest industrial accident in the United States occurred at 0912 hrs. Today we remember the members of the Texas City Volunteer Fire Department who gave their lives battling the fire that caused the massive explosion on board the S.S. Grandcamp. 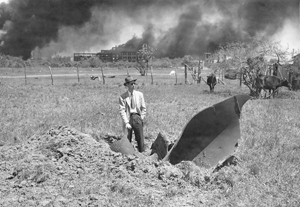 The force of the blast from the S.S. Grandcamp was so strong, debris, including the ships' two anchors, was found over a mile away from the site. Photo courtesy U.S. Army Corps of Engineers Cars parked near the blast site were destroyed, along with every building and home in the surrounding area. Photo courtesy U.S. Army Corps of Engineers

In April, 1947, the S.S. Grandcamp, a cargo ship previously utilized during World War II, docked in Texas City, Texas, to pick up a load of ammonium nitrate fertilizer. At approximately 0800 hrs on April 16, after about 2,300 tons of ammonium nitrate had been loaded into the cargo holds, longshoremen detected the smell of smoke near the holds. At 0825 hrs, two fire trucks arrived on scene, followed by the two remaining trucks from the Texas City Volunteer Fire Department (TCVFD). Despite attempts to douse flames and remove cargo, the fire continued to spread, and the heat surrounding the cargo quickly grew to 850 degrees F.

At 0912 hrs, the ammonium nitrate on board the Grandcamp detonated. The blast sent cargo 2,000 to 3,000 feet into the air, created a 15' tidal wave and registered on a seismograph as far away as Denver. All nearby buildings, warehouses and homes were leveled. In all, 581 people were killed, including the TCVFD chief and 27 of the department’s 28 firefighters. More than 5,000 people were injured and 2,000 were left homeless. The cause of the fire and subsequent explosion, according to some reports, was a lit cigarette.