Crane rescues present numerous challenges, the least of which is extracting patients from a small space high up in the air, especially if the patients are seriously injured or unable to help in the rescue. On Oct. 30, firefighters from the Long Beach (Calif.) Fire Department (LBFD) faced such a situation.
The Call
The 9-1-1 call first came in as request for aid for an unknown medical problem at a location on Harbor Scenic Drive. At1915 HRS, the LBFD dispatched Engine 6 and BLS 4. 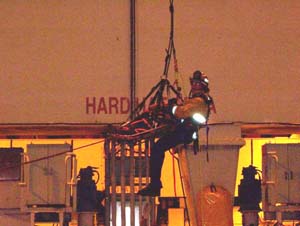 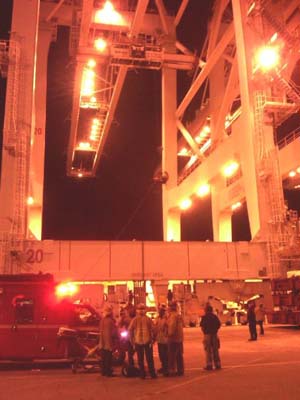 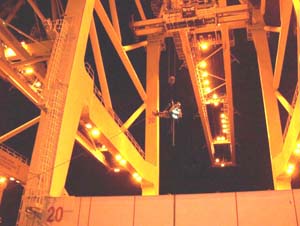 While the first units were enroute, the dispatcher informed responders that the call involved two injured persons on a crane and requiring rescue, so the call was updated to a rescue response. This included USAR 6, Truck 1, Battalion 1, Rescue 1, Rescue 2, Rescue 10 and Engine 24.

The first units arrived on scene at 1921 HRS at the Long Beach Container Terminal. They were met by port workers, who said that the two injured adults, a male and a female, were in a control cab of a crane approximately 150 feet above the dock. The crane was used for loading and unloading containers for ships docked in the area.

The workers said that the two victims were in the cab as the crane was moving along its track when there was an apparent mechanical malfunction, causing the crane to stop abruptly and throwing the two victims against the windshield of the cab. The workers also said that when they first communicated with the victims, they seemed incoherent.

The Response
The crane had its own small personnel elevator, so the first action was to send up three rescuers: a firefighter, an engineer and a paramedic. They were assigned to make patient contact and perform a lockout/tagout on the electrical powered crane mechanism. These initial personnel were followed by two rescue paramedics and a crane mechanic from the dock, who assisted the rescuers with the crane’s mechanical and electrical system.

By 1935 HRS, the rescuers had made contact with the patients and began medical assessment. The hatch to the control cab was approximately 5' x 3', and although rescuers were able to fit inside with patients, it was tight. Rescuers found one patient coherent and one not totally coherent. Both were complaining of neck, back and shoulder pain, and they had some facial injuries. The initial responders had taken up basic rescue gear, including rope, carabiners and Prusik slings, along with basic medical gear. They now requested additional gear, including two basket litters.

At 1940 HRS, the responders established the terminal command system. Battalion 1 established Terminal Command, while Engine 6 assumed Rescue Group, and Engine 24 took Medical Group.
With the assistance of the crane mechanic, rescuers determined that the crane had a utility wench separate from the crane’s main lifting system. This auxiliary wench could be powered while the crane’s main power system remained in lockout/tagout mode. The smaller wench could safely be used to lower the patients, thus saving time that would otherwise be needed to rig a lowering system.

Rescuers had to first conduct a vertical haul to raise each patient out of the cab. Medical responders established IVs and C-spine stabilization for both patients and lashed both in litter baskets in preparation for lowering, using both internal and external lashing made with 1" tubular webbing. The internal lashing consisted of two elements: an improvised chest harness constructed of 1" tubular webbing along with an improvised seat harness. The external webbing consisted of webbing that ran side-to-side across the top of the patient for the full length of the litter.

The female patient appeared to be more injured, so rescuers decided to lower her first. She was also exhibiting agitation about the height, and at times appeared not to be totally coherent, so they decided to lower her along with a paramedic as a litter tender. They attached the litter to the hoist cable with pre-made spiders. As a safety, they used a separate rope run though tandem Prusik belays. In addition, rescuers attached a tagline to the litter to be controlled by rescuers on the ground. This helped stabilize the litter during the descent.

The female patient packaged in the basket litter, and tended by the paramedic, arrived on the pier surface at 2010 HRS. Rescue 1 transported her to Saint Mary’s Medical Center in Long Beach.
Rescuers then performed a similar lowering operation for the male patient. Because he was comfortable with the heights and was medically stable, however, he didn’t require a litter tender. At 2032 HRS, Rescue 10 transported the male patient to Saint Mary’s Medical Center.
A total of 24 fire personnel responded to this incident.

Lessons Learned/Lessons Reinforced
High winds added some slight complication to the rescue operation, requiring extra attention to safety in the high-angle environment. The tagline on each litter being lowered helped keep the litters from swinging widely and spinning.

Capt. Underwood notes that LBFD rescuers don’t normally use a litter tender in high-angle lowering, but the medical condition of the female patient, along with her level of anxiety, required the presence of a litter tender.

Three paramedic units were used in the call because the battalion chief wanted to make certain that there was continuity of medical care, from first contact with the patients through their rescue and transport.

As is often the case in a workplace situation, the workers on site were anxious to help, and it took some convincing to get them out of the rescue zone.