With five passengers in the van and one in the Cadillac, there were plenty of potential patients milling around as we arrived on scene. The identity of our primary patient became readily apparent as she stood in ankle-deep snow alongside the vehicles crying out in pain. During the initial chaos the howling young lady received the bulk of our attention. As additional responders triaged the remaining passengers, we were relieved to discover that only one patient warranted transport. After 30 minutes, our weather-delayed ambulance crew arrived to aid us in patient care. 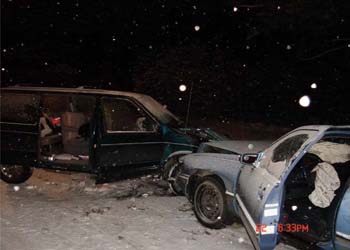 The 1980s Caravan collided with a full-sized Cadillac on a hill covered with snow and ice. 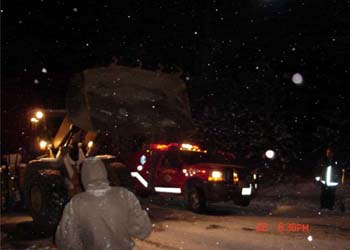 Traction was greatly improved after one of our local contractors spread gravel on the road. Remember standard orders 5 and 10: Provide traction aides for personnel and vehicles. 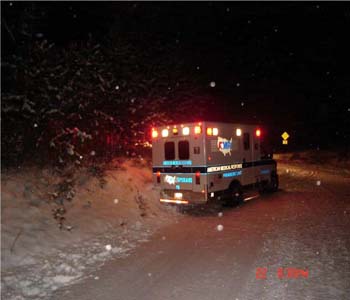 Although we had some trouble with our ambulance, the patient stayed warm and dry while waiting for the replacement ambulance. This experience reminded us of standard order #11: Chock, block or otherwise secure vehicles on icy roads, and standard order #9: Protect the patient from exposure to the elements; prepare for delayed transport.

While caring for our patient, I noticed the ambulance backing down the hill. Giving it no thought, I turned back to its driver who held the other end of the blanket that we were using to protect the patient from the falling snow. I then realized that the other medic was arguing with our EMTs over moving the patient. I surprised myself as I calmly remarked to the driver, “Your ambulance is sliding down the road.” The heat of the exhaust had eliminated the little friction that had existed between the tires and the ice, leaving the ambulance in free fall, picking up speed and heading our way.

Watch Out for Dangerous Winter Conditions
This now humorous but nearly tragic mishap brought to mind the “standard orders” and “watchouts” for winter fire and EMS operations. The ambulance driver violated rule 11 of the 15 Standard Orders for Winter EMS and Firefighting Operations: Chock, block or otherwise secure vehicles on icy roads.

Every winter I learn something new about working in temperatures hovering around zero and below. Many of these lessons are mission-critical for life safety, such as signs of hypothermia, while others are more trivial, like the freezing point of your ink pen. After 50 years of living in the wilds of Eastern Washington and North Idaho, with 20 of those spent as a firefighter, I offer you these lists as a reminder of the hazards of winter operations and in the hope that you will learn from our mistakes. Note: These rules aren’t for those 40-degree days when Floridians break out their parkas, but those single-digit days when Montanans don their flannel shirts.

15 Standard Orders for Winter EMS & Firefighting Operations
1. Drive according to road conditions; when in doubt, assume the roads are slick.
2. Pack extra clothing; you will get wet.
3. Ensure proper rehab; keep responders hydrated, nourished, dry and warm.
4. Watch teammates for hypothermia, frostbite and exhaustion.
5. Provide traction aides for personnel: sand, kitty litter and boot chains.
6. Downed power lines are always “hot.”
7. Watch your step; assume hard surfaces are slick and that snow is hiding hazards.
8. Even if oncoming vehicles see you, assume they cannot stop.
9. Protect patients from exposure to the elements; prepare for delayed transport.
10. Provide traction aides for vehicles: sand, kitty litter, tire chains, Roto chains and tow straps.
11. Chock, block or otherwise secure vehicles on icy roads.
12. Call for plows and sand trucks early and often.
13. Provide blow-dryers and other portable heat sources to de-ice SCBA masks and regulators and other critical items.
14. Keep your water flowing at all times.
15. Call for a tow; you’ll have two stuck apparatus and a repair bill if you attempt to pull out one stuck apparatus on your own.

A Close Call
Oh, you probably want to know want happened to the ambulance. As we were tensing to grab our patient and make a rapid roadside extrication, the front wheels turned to the left and headed toward the opposite bank. The driver speed skated to the back of the ambulance in an insane effort to stop the sliding vehicle. Several shrieks from us brought him back to reality and he leapt toward the door, jumped behind the wheel and rode the ambulance into the ditch.

Our brush truck also spun out as it slowed to approach the scene, sliding backward and joining the ambulance in the ditch. At that point, the chief called for a county sand truck, only to find that it was hours away. Hearing the ETA, a local contractor watching the show departed, only to return several minutes later driving a massive front-end loader. As the loader crept up the hill, a curtain of gravel cascaded from the bucket. With the newfound traction, we were able to clear the hill of the fire and police vehicles not already in the ditch, clearing the way for the replacement ambulance.

Once the replacement ambulance departed, the contractor connected a tow chain to our brush truck, extracting it from the ditch. After repeating this maneuver with the stuck ambulance, he proceeded to disentangle the Cadillac from the minivan. It just so happened that the Cadillac belonged to the contractor’s niece, which was why he had eagerly provided personnel and machinery. I just thought he loved the fire department!

With the patient hospital-bound, the hazard abated and all vehicles at street level, I thought we were done for the night. Bob, one of my fellow firefighters, and I headed down the hill to the side street where our personal vehicles were safely parked—or so we thought. The contractor began moving the Cadillac to the side street. Though flat, the road surface was just as slick as the hill the ambulance had slid down—although at least the Cadillac had a pilot for its “controlled slide.” Without the luxury of power steering or brakes, the car headed directly toward our vehicles, skidding to a stop only 8 inches from Bob’s RAV4. Now we were done.

If we had adhered to the standard orders for winter operations and been more alert to the conditions, we could have avoided this harrowing experience.

Bob Kolva is the former chief and 18-year veteran of the Newman Lake (Wash.) Volunteer Fire Department. Kolva currently serves the department as a volunteer firefighter and EMT.