Fire: The Winecoff Hotel
Location: Atlanta
When: Dec. 7, 1946
Loss of life: 119
Known for: Largest loss of life in a hotel fire in U.S. history
Impact on the fire service: Major changes in fire codes, strategy and tactics

Editor’s Note: Today marks the 63rd anniversary of the Winecoff Hotel Fire. We dedicate this recollection to the 119 people who perished on the night of Dec. 7, 1946. 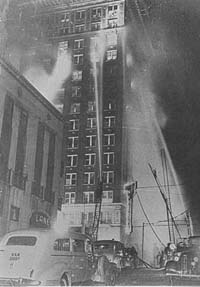 The Winecoff Hotel Fire was especially tragic because the hotel was thought to be "fireproof" by standards of the day. Unfortunately, there were no fire alarms, sprinklers or fire escapes. Photo courtesy The Atlanta Journal & Constitution/Longstreet Press.

When we think about infamous hotel fires, our minds often go to the MGM Grand in 1980, or perhaps we think of the Las Vegas Hilton fire just a few months later. We might also remember the horrible CNN images of the 1986 Dupont Plaza Hotel in San Juan. Unfortunately, none of these compare to the loss of life that occurred on the morning of Dec. 7, 1946, in Atlanta.

The Winecoff Hotel was considered the jewel of the Atlanta skyline. It sat across the street from the Lowes Grand movie theater, the location of the world debut of “Gone with the Wind” in 1939. At 15 stories, the Winecoff was the tallest building in Atlanta at the time and was considered Atlanta’s most luxurious hotel. The previous owner and builder of the hotel, William Fleming Winecoff, lived in his own suite in the hotel.

Because the exterior of the hotel was constructed of brick, it was considered “fireproof” by the standards of the day. Few, if any, considerations were given to fire protection or safety. In fact, there were no fire alarms, sprinklers or even fire escape stairs.

Tragic Losses
The citizens of Atlanta were preparing for the observance of the 5-year anniversary of Pearl Harbor Day, but in the early hours of Dec. 7, the fire would catch many hotel guests and employees asleep.

The fire department began responding at approximately 0345 HRS. By the time they arrived, many guests had found that the only stairs, located in the center of the structure, had become chimneys for fire and smoke, and escape was impossible. As a result, many people attempted to escape by climbing out windows on bed linen. Although some were successful, many fell to their deaths. Irene Justice was a 27-year-old secretary who worked and attended law school downtown. When the ladders reached the sixth floor, firemen thought she was sleeping. When they touched her, they discovered she had perished while waiting for rescue. Photo courtesy The Atlanta Journal & Constitution/Longstreet Press


Guests also tried to jump into life nets offered by the fire department, only to miss. As they fell or jumped, people struck wires, awnings and the marquee; later, their bodies had to be retrieved. At least 36 people died as a result of jumping from their hotel windows. Although there were reports of some firefighters losing their lives as a result of falling victims, none actually did. One police officer was seriously injured and had to retire due to disability.

William Fleming Winecoff and his wife also perished that night. Eighty percent of all fatalities involved guests whose rooms were located above the eighth floor. Fire service ladders could only reach the seventh floor, and they were slow and labor-intensive to set or move.

But there were also incredible stories of survival and rescue. One celebrated rescue was that of a 1-year-old child. As firefighter Rick Roberts set a ladder to the window of room 508, he was handed little Connie Foster. Mildred Johnson, in room 628, tried to climb from her window using a bed sheet. Flames coming from room 528 burned the sheet, and she fell to the alley below. Her life was spared because the pile of bodies broke her fall.

The Fire’s Impact
This fire was devastating for many reasons. Even though 22 engines and 12 ladder trucks eventually responded to the fire, they couldn’t obtain adequate access due to the close proximity of other structures. The building to the rear was only 10 feet away, which prevented or hindered ladder rescue operations. In addition, as previously noted, the building featured little to no fire protection systems.

Prior to this fire, there were no national fire codes. Local authorities determined their area’s building construction types. As a result of this fire, building codes and therefore fireground operations were changed dramatically. National safety codes were established and enforced. Subsequently, many southern cities insisted that older hotels be brought up to code or risk being shut down. In some cases they were given only 7 days to comply. It took only a little over a year for the Georgia State Legislature to pass the Building Exits Code, which requires a means of escape in buildings in the event of a fire.

The Winecoff Hotel fire was the worst loss of life in a hotel fire in U.S. history, and the second greatest loss of life for a hotel fire in the world. The loss stands at 119 people. This represents 41 percent of the hotel’s capacity (it was filled that night). By comparison, the MGM Grand Fire claimed 85 lives and the Dupont Plaza Hotel resulted in 96 deaths.

The fact that the fire in the MGM Grand, which had more than 2,000 rooms, resulted in fewer lives lost is a testament to the safety code changes that were implemented as a result of the Winecoff Fire. Although the potential for loss of life in high-rise hotels has increased exponentially, the Winecoff remains our largest loss of life in a hotel fire to this day. 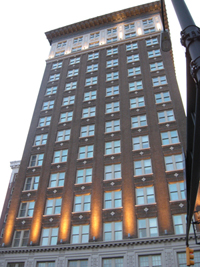 Today, the Winecoff Hotel has been renamed the Ellis Hotel for the street that runs along the north side of the building. It was listed on the National Register of Historic Places on March 31, 2009. Photo courtesy Allen B. Goodwin.


The Winecoff Today
The building that housed the Winecoff has sat empty for most of the 60-plus years since the fire. Every business that has attempted to occupy this space has failed. For many years, city officials were afraid to implode or demolish it because it sits directly above the Atlanta underground transit system. In October 2007, a new hotel opened in the Winecoff building.

For further information about the Winecoff Fire, visit www.winecoff.org. A book is also available entitled, “The Winecoff Fire: The Untold Story of America’s Deadliest Hotel Fire."

Captain Mica Calfee is a captain at Station 3, one of the busier stations in Irving, Texas. He has been a firefighter since 1980 and has authored numerous articles, several of which have been published in fire service publications.