Bakersfield Firefighters Get to "Root" of Problem

RESCUE REPORT: Bakersfield Firefighters Get to "Root" of Problem
By Tom Vines

At 1037 HRS, a 911 caller reported hearing two men crying for help in a large hole in a neighbor’s yard. Two minutes later, the department dispatched a full rescue response, which included Truck 7 with paramedic, Engine 7, Engine 5 and Light Engine 205 Medic, along with a battalion chief.

When units arrived on scene at 1042 HRS, they found a large hole, almost the size of the entire front yard. In the hole they found two men trapped under a huge ball of roots and dirt. The root ball, which was about the size of a VW Beetle, appeared to weigh thousands of pounds. The men were conscious, alert and oriented, but firmly trapped and in pain. 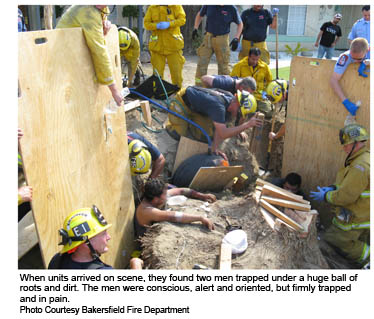 Bakersfield dispatched USAR 1, a Type 1 heavy-rescue vehicle towing a trailer of equipment, along with Truck 15. And Kern Country dispatched its Engine 52, with a USAR trailer containing a full rescue cache.

The two landscape workers had been attempting to remove the huge root ball—from an earlier tree felling—using a chain attached to a vehicle. As they were trying to chop down some of the roots to ease the extrication, the huge ball suddenly broke loose, falling back down in the hole and trapping the workers.

One worker was having trouble breathing and occasionally experienced a diminished level of consciousness. He had one leg pinned under the root ball and was in pain from a femur fracture. The second man had both legs free, but his torso was compressed. Both patients had traumatic abrasions to their arms and shoulders, along with some crush injuries.

The first step was to prevent collapse by shoring the hole using 2 x 4s, 4 x 4s, and 4 x 4 wedges. The next step—freeing the men from the entrapment—proved to be more challenging.

Rescuers inserted six air bags into the space, but they found that as they began to inflate bags to raise one side of the root ball, it would rock and compress the patient on the other side. They also found that this process caused more dirt to dislodge, so they inserted plywood to line one side of the hole. To reduce the size of the ball, they used Sawzalls to trim the roots.

Because the space under and around the ball was so tight, rescuers initially could not provide full C-spine protection to the patients, but paramedics were able to lean into the hole to monitor the patients and initiate IVs.

The rescuers had to slowly and carefully inflate the bags simultaneously. After about 40 minutes, they were able to free the more critical patient, provide him with C-spine and other precautions and transport him. About 5 minutes later, they were able to free the second patient. With rescue paramedics aboard, Hall Ambulance transported both patients to Kern Medical Center.

LESSONS LEARNED/LESSONS REINFORCED:
One medical situation to consider in an entrapment rescue is the potential for crush injuries, which can be severe—even fatal—and may only appear after the extrication. Rescuers are often aware of the potential for crush injuries in building collapse or trench rescue, but often don’t consider this possibility in entrapment situations.

Additionally, there was one communications challenge that was unusual. A common problem in incidents with a large number of responders is the overload of the radio system. In this incident, however, everyone was close to one another and communicated by voice. The problem arose as personnel and units arrived on scene and didn’t know what sector or officer they should respond to. This created some confusion in coordination. One possible solution to this: announcing by radio to all incoming units whom they should respond to.