Firefighter Survival: Ammonia leak poses big hazard, or is it the PPE? Or, the shots fired!? WTF!

I was very proud when i seen this one. could it have been the no ppe with an scba? Them moving the anyhdrous ammonia tank from the ditch to the middle of the highway. Or was it the cop shooting at it with a high power rifle (AR-15). People wonder why our firefighters are getting hurt, well here is a prime example. All i can say is stupidity only goes so far before you get to mentally ill. Here are just a few lines from the article.
"People in passenger vehicles and semi-trucks watched from a safe distance where traffic was stopped as police breached the tank by firing into it with a high-powered rifle. Authorities kept the busy highway closed for nearly an hour during the incident."

"We wanted the tank in a lower area and in a spot where it would be safe to shoot into it and where there was more room to vent it," Talkington explained. "We wanted to protect the motorists and keep everyone safe."

"As Tyler sprayed a heavy stream of water onto the tank, Talkington fired into the tank with an AR-15 police rifle. He made two shots into the tank near the top, then after a couple of minutes, fired twice more into the bottom."

I didnt post this to make anyone look bad (not sure they needed my help with that), but to show everyone the dangers that you run in and what to NOT do.

Comment by Oldman on May 3, 2010 at 7:24pm
Other than no PPE, and an unmanned monitor, evidentialy shooting IS a way of mitigating an incident like this. A couple of LEO's I've talked to say that they have a similar protocol. I would be concerned even if I had PPE on about being that close when the shooting starts. I do know what a ricochet is.

Comment by Rusty Mancini on May 3, 2010 at 7:20pm
Unbelievable!! It should of had the title" What were they thinking".

Comment by FFN WebTeam on May 3, 2010 at 11:20am
Subject of post can be found here, courtesy of Firegeezer. 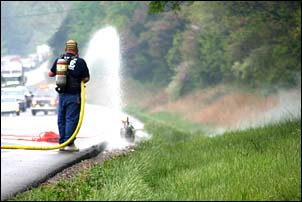