Can Water In An Electrical Outlet Cause A Fire 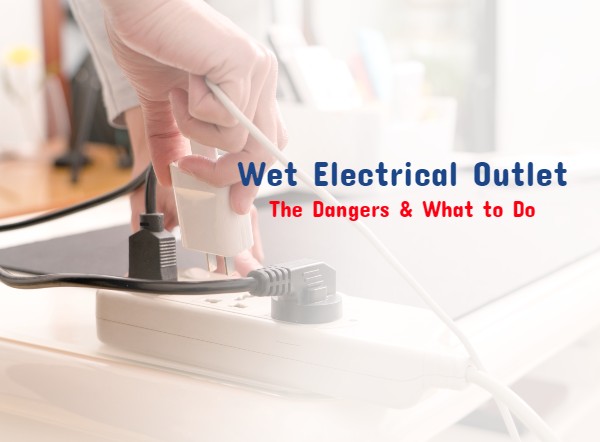 Can a Wet Electrical Outlet Cause a Fire?

Nowadays, electrical wiring can be found everywhere, be it in households, workplaces or even table-tops at a coffee shop. It has become part of our lives, and a day without electricity is unthinkable, especially as one of the tech hubs around the world. However, despite it being overall safe, hazards do exist in the home, particularly if the wiring gets wet. Not sure if there is the best case scenario, but if it does happen, it can corrode and cause problems with the wiring and the performance of your home appliances and any electrical device connected to it. The Worst case, though? It can either electrocute you if you come in contact with it, or set your house on fire.

So, what exactly happens when the wiring gets wet? Can water in an electrical outlet cause a fire in reality? Is it true, and how so? Well, let’s take a clearer look at the science behind this.

Insight on Water Being The Cause of Electrical Fire from Ted M.

It's not so much water being the conductor but the level of impurities in it.

Salt being the major cuprit.( not just sodium but metal salts as well).

Salt impurities can be minimal to the point that you cannot taste it yet still be enough to conduct some current.

Water damage to outlets and exposed conductors produces corrosion and that generates heat as the corrosion creates resistance to current flow, Here is where the danger is.

Excessive current draw overloads the circuit and tends to cause nuisance tripping of breakers and fuses. Its when the breaker size and fuse size exceeds the wire amp rating that fire hazards occur because the wire will burn before the fuse or breaker trips out.

It's one reason as an electrician that I megger test the conductors before upgrading a panel.

A good rule of thumb is If the wire has been subject to immersion in water or any other liquid contaminant it should be replaced as its safer in the long run!

Let’s say that you accidentally knocked over a cup of water over your smartphone charger and now it is completely wet. Believe it or not, it is actually not that bad. The wire itself contains three smaller wires inside the plastic layer: a copper ground, a live wire and a neutral wire. As long as these three don’t get wet or any kind of exposure, it should be "fine". Just in case, though, unplug your charger and let it dry for a while. And for extra precaution, use a Portable Appliance Tester (you can buy them in an electronics store or through internet) to check if it wasn’t damaged and keeps working. However, now that you’re sure that your charger is A-OK, let’s check if the socket or plug got wet too. If it did, then it’s time to give it some extra attention or call the local electrician pros.

Water in electrical outlets is quite a danger. Drying them up will not suffice, unlike battery chargers. As we said before, the outer layer of all chargers’ wires protects the three small wires they envelop because if they’re exposed they can cause trouble. Water damage to electrical outlets, however, is a whole different story. Let’s break this down so you can understand a bit more.

According to our Q&A with National Restore, many households utilize ROMEX® wires for electricity. These wires rely on several wraps that cover safely the copper ground wire: these are the live wires, neutral wires and paper. Despite its thickness, however, the plastic coat, or even the socket itself, can easily break, and if it comes in contact with any liquid, the paper will create a rust, which is a big problem for all kinds of metallic wiring. An exposed copper wire always signify hazards for their housing building.

What’s worse is that water can also start a fire, as they can produce deadly short circuits to every electronic device they get on their way. Why does water short circuit electronics, though? Well, you see, liquids can boost the circuits’ electricity current, which is the cause of many short circuits in modern appliances that contain fuses (a rust electric fuse is usually the result of overheat, for example). However, appliances that lack fuses will start a fire, as the wires will heat up without any sort of impediment. And as we stated at the beginning of this article, water can also conduct electricity to your body if you touch a live wire. This is because the ground wire’s main function is to return electricity to the ground (that’s why the name) and will pass whatever it is on its way to reach its destination. And if your body it’s on its way…well, let’s just conclude by saying that touching a live wire is a bad idea.

Be careful if your house ever suffers from a flooding or a burst pipe: wiring will become as dangerous as a radioactive zone. If your electrical outlet(s) got wet, immediately turn off electricity and call an electrician and a plumber. 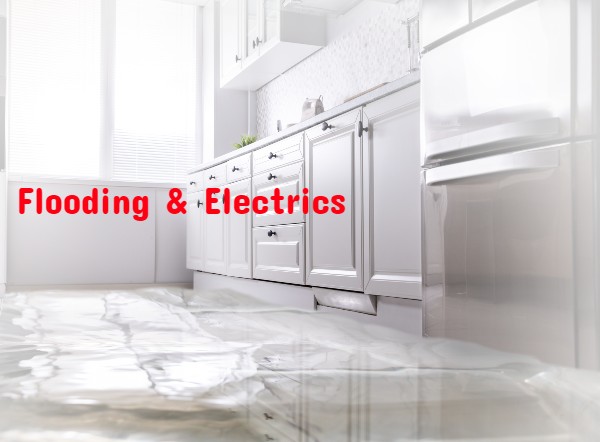 If it’s a flooding, however, be far more cautious. Don’t try to check everything thorough, for example. You see, the signs that your house is in peril because of moisture in your wiring will be obvious – water leaking from electrical outlets is enough warning, for example. Also, if you fear that your outdoor electrical outlet got wet too because of any flooding (water in fuse boxes is a greater danger!), tell this to your electrician and immediately walk away from the risky zones of your house.

How to Solve This

Should the damage be bigger than expected, contact a qualified electrician to survey the area and get sure that it is safe to return to your house. You should only go back to your house if there are no more signs that water can, and will, affect your wiring. Your electricity supply must be also turned off until it is thoroughly checked, that it is safe to step into your house again. It is common for professionals to carefully and slowly check every outlet – might take days – to fully repair everything. Sometimes, if the liquid penetrated deep down into a wire, electricians might have to cut out the wet area for safety measures; major damages may need a whole new set of wiring. But in the end, and for your sake, this might be the best solution, after all.

Big thanks to Black Electrical, Daily Home Advise, and Power Electricians for the interview FAQ session. Let’s sum it up by answering briefly any other question you might have.

What happens When Water Gets Into An Electrical Outlet?

Outlets stop working because water hinders their performance, but wires do keep functioning and still carry electrical currents into them, as if nothing had happened. However, water turns them into hazardous items, so turn off your household’s power supply as soon as you suspect that there’s moisture in your sockets or wires.

How to dry out a plug socket, though? You’ll have to turn off the power immediately if it’s plugged to something and unscrew it so you can clean it and let it dry for a while. And what happens if an extension cord gets wet? Same process, but be careful if the extension cord has also a switch. You better have your hands dry for this one, too, and unplug it carefully, and then uncoil it so it can dry faster.

However, if you feel totally unsure about this, don’t take any chances and call a professional instead. It’s worth spending some bucks than to risking your health, if you truly don’t know how to handle this situation personally.

Can a Water Leak Cause An Electrical Fire?

What happens if water gets in an electrical outlet? People tend to think that electrocution is the worst thing that can happen if water and electricity combine, as it is usually unthinkable that water can cause a fire. And yet, electrical fire caused by water is far worse, and more possible, than getting electrocuted by a wet live wire. This is because leaks, no matter how big or small they are, will always find a way into the light fixtures and wiring buried deep within the cords. And the small sparks they produce, although seemingly harmless, can – and might – provoke a huge blaze in no time. It's always helps to know how to tell if water damage is new or old.

Can a Dead Outlet Cause a Fire?

It’s common for some outlets to simply not sometimes work, even when the power is on. Still, don’t rest on your laurels. Even if it’s not working, a dead outlet is not even a safe outlet. There’s still a fire risk because of the wires inside (and don’t think that water on electrical outlets extinguish fires!), so you still gotta fix it with the help of a professional electrician. 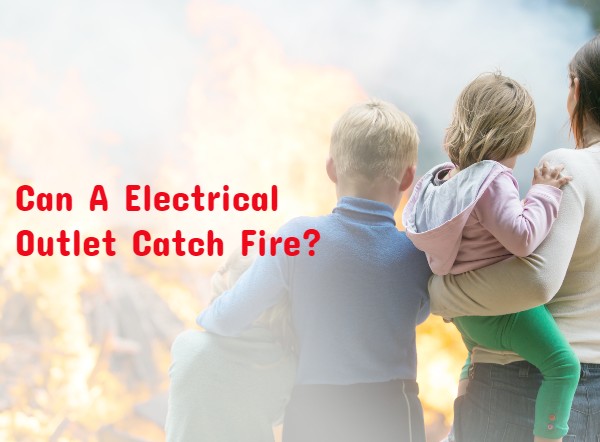 Can An Electrical Outlet Catch Fire?

Yes, but it’s usually because of faulty or old appliances, as fires can also originate from cords, receptacles and switches. As a matter of fact, even if you tried to remove the grounding plug from a cord to create a two-prong outlet, it can also start a fire. So, don’t take a rest until you get sure that all – not most: all – appliances, home theater items and anything connected are up and running in an optimal shape.

Have you had experience on this topic? Please, share the situation and any helpful feedback.

Comment by Ted Mead on December 11, 2019 at 10:04pm
Pleas do the more people are educated the safer they will be

Appreciate the insight Ted. Do you mind if I add this to the article?

its not so much water being the conductor but the level of impurities in it.

salt being the major cuprit.( not just sodium but metal salts as well)

salt impurities can be minimal to the point that you cannot taste it yet still be enough to conduct some current.

water damage to outlets and exposed conductors produces corrosion and that generates heat as the corrosion creates resistance to current flow, Here is where the danger is.

excessive current draw overloads the circuit and tends to cause nuisance tripping of breakers and fuzes. Its when the breaker size and fuze size exceeds the wire ampacity rating that fire hazards occur because the wire will burn before the fuze or breaker trips out.

its one reason as an electrician that I megger test the conductors before upgrading a panel.

a good rule of thumb is If the wire has been subject to immersion in water or any other liquid contaminant it should be replaced its safer in the long run!