LA Times -- A Los Angeles firefighter was killed and another critically injured Wednesday afternoon after they were apparently hit by exploding manhole covers while responding to a call in Westchester, a department spokesman said.

The firefighters were called to Sepulveda and La Tijera boulevards at 1:57 p.m. after a report of smoke from a possible fire. Once they arrived, there was a larger explosion, and they were hit by the manhole covers, said Ron Myers, spokesman for the Los Angeles Fire Department. Firefighters called in a rescue helicopter to fly the injured individuals to a nearby hospital, Myers said.

Links to updates and multimedia will be posted here as they become available.

Please feel free to post condolences and messages of support in this thread.

On Wednesday, March 26, 2008 at 1:57 PM Los Angeles Firefighters were summoned to investigate smoke in the 8800 block of South Sepulveda Boulevard in the Westchester area of Los Angeles - not far from Los Angeles International Airport.

At approximately 2:20 PM, an explosion occurred at a nearby building, causing injury to two male Firefighters and one civilian. 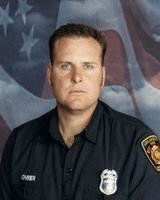 Firefighter Brent A. Lovrien (pictured right), age 35, a 10 year veteran of the LAFD assigned to the 'A' Platoon at Fire Station 95 since October 2005, died shortly after arrival at the Centinela Freeman Regional Medical Center, Marina Campus.

Engineer Anthony J. Guzman, age 48, an 18 year veteran of the LAFD assigned to the 'A' Platoon at Fire Station 95 since February 2002, suffered multiple fractures and facial trauma. He was transported to the UCLA Medical Center in Westwood, where he remains in serious but stable condition.

Preliminary reports indicate the civilian was treated at the scene and released.

As dictated by Fire Department policy, a formal and detailed multi-agency investigation is underway to determine the exact nature of the explosion, as well as the precise cause and manner of the Firefighters death.

The men and women of the Los Angeles Fire Department thank you for your kind words and sentiment at this time of overwhelming sorrow and immense loss.


The latest information about this incident, as well as details regarding memorial services will be offered via this blog, and can be accessed anytime via LAFD.ORG

Comment by Zachary McCreary on April 1, 2008 at 10:06pm
As just a fire explore, i would also, amung all those who have heard of this terrible news, like to give my heart out to the friends and family of those men that where injured and to the brave man that died that day. This is a brotherhood and we are all in loss of a great man thank you for your duty. RIP my brother

Comment by sandra on April 1, 2008 at 4:23pm
I am so sorry to hear of this tragedy. My heart and prayers go out to all involved. May the Lord above grant these families and the LAFD comfort and peace in their times of need.

Comment by Amy on April 1, 2008 at 2:52pm
Many prayers to the families of our fellow firefighter brothers.God Bless all those who are involved. May God give you comfort and understanding.

Comment by Jerry Venegas on March 31, 2008 at 10:59am
Heaven have another Angel....!!! My condolences to their families and LAFD for your lost....God Bless all Brothers

Comment by Wellie Eglorianin, M.A. Ed. on March 30, 2008 at 8:58am
Condolences to their families. Let's pray for the bereaved family members and their relatives for the sudden lost of their beloved ones. It is really sad to read and hear this kind of news. Let's be careful out there guys!

Comment by Ron Nicolosi on March 29, 2008 at 1:20am
My heartfelt condolences go out to the family of our fallen brother. He and our injured brother and their families will be in our prayers. May Our Father in Heaven comfort all those who mourn.

Comment by Jordan Cox on March 28, 2008 at 5:02pm
RIP Brother You Have Fun In Heaven And Ill Pray For Your Deptment And Family JFVFD 713