When Do You Stop? I was acting EMS chief and first on scene at a reported multivehicle with entrapment. I did the typical "are you OK" to the truck driver and continued on to the car. I got a pulse called in and command was established by another Asst Chief. We set up and worked like hell for 10 minutes. ALS called it. It was like every bit of adrenaline immediately left me and I was beat. After beating the reaper twce that day it finally caught up with me and I was pissed. 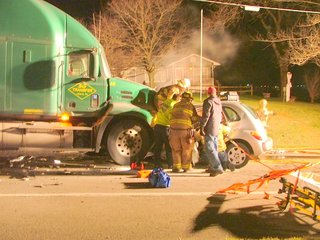 Two sets of Hurst tools from the Heavy Rescue, One from the Engine and a mix of manual and electric hand tools had met their match. The front bumper of the truck was resting on the dash of the car. The driver's seat was pushed back and she was twisted up inside. We couldn't even find her legs until the rescue winched the car out from under the truck. It took another hour after that until we had her out. The guys did a nice careful job. 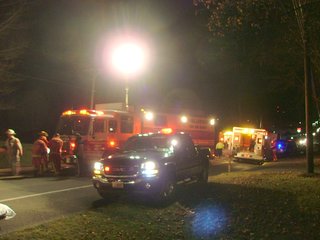 We lost the rescue to a bad alternator and that pushed my buttons too. When we got together later others felt the same. Sometimes you kick butt and and live on the natural high until the next shift. This time we got a nasty taste of our own humanity, we didn't like it, we were just along for the ride. I'm glad that we all felt the let down, we'll keep the edge longer. Next time we'll prevail over the jaws of death. Next time...

We have had a hell of a lot of practice with vehicle accidents the last few month. Lost another one not 25 feet up the road from here last month and everyone has been to a couple accidents in between. I've never seen this many in such an extended period. 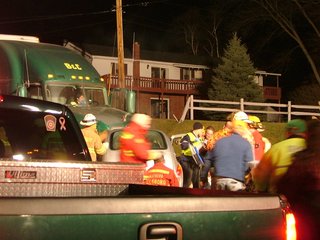 By the way God bless the cover up crews. We had three other calls in our first due during the initial part of this call. When it rains it pours.

Comment by Pete Sedor on November 30, 2007 at 3:36pm
You never stop no matter how tired you get, you find that extra energy to go the extra mile or two if ya have to. Good job guys keep up the outstanding work. And so will the rest of us.

Comment by Brad Carlson on November 30, 2007 at 3:31pm
Keep up the good team work.And good job.I've been there myself.I've been on back to back mva's and it was like come on when does it end.The rush was gone from the first 1 and now on to another.

Comment by Dennis on November 30, 2007 at 8:22am
great job guys been there my self a few times we save who we can and let GOD have the rest as long as we go home safe to our families that all we can do