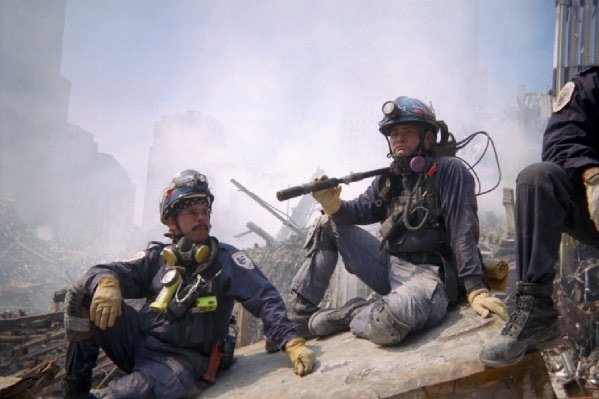 Why I Joined Fire/EMS
Still working on that

Why I Love Fire/EMS
All the great people that are just as nuts as me.

Graduated Amanda-Clearcreek 1987
Joined the Amanda Twp. Fire Dept. as a senior in high school
Was there for 3 yrs, and then moved to The Clearcreek Twp. Fire Dept for 2 yrs.
In 1988 I was hired as one of the original 911 dispatchers for Fairfield County & stayed there 2 ½ yrs, until attending the OPOTA (OH Police academy)
Attended some college @ Hocking College
Worked as a Bremen Police officer 1991
Then with Hocking county Sheriff’s Office,
Ohio Organized Crime Investigation Unit
& a Federal Special Operations Narcotics Team
In 1993 was hired by the Columbus Ohio Division of Fire & stayed in law enforcement on the side until 2001.
In 1999 I joined the FEMA Urban Search & Rescue Team “Ohio Task Force One”
9-11-01 I was deployed with said team to NYC for 10 days of search efforts.
I am currently still a member & hold the position of K-9 handler, I am also a Rescue specialist, a search specialist, & hold my class “A” CDL’s & drive our deployment Tractor Trailers.
I am a member of the Central Ohio Strike Team Region 4 (USAR).
In 2001 until present, I started working part time with the Bremen-Rushcreek Fire Dept.
I also am a Fairfield County Incident Fire Safety officer, I also hold my “Red Card” with the Division of Forestry to go west & fight forest fires.
A Haz-Mat Tech with Columbus F.D. & Fairfield County Special Op’s Unit.
I currently Work with the Fairfield County EMA as the Community Emergency Response Team Director & have helped with that team since 2004.I sit on the Local Emergency Planning Committee & am trained for the Emergency Operations Center.
I have just recently joined the state K9 TAC (Technical Advisory Committee).
I teach & hold many certificates in Weapons of Mass Destruction & Terrorism Awareness
I hold an EMT Paramedic certification

R Griffin said…
What FOOLS chapter do you belong to? BE SAFE!!!

Chief 29 said…
Thanks a lot for joining my group Antique Hand or Horse drawn Aparatus. Stay safe and have fun.

Thanks for the invite to this site. Love it!!!! Again thanks for being there on my accident scene near Williamsport a year or so ago. It was great to see a familiar face at that time. Now I know what it's like to be on the other side of EMS!!! Becky Noble

RetCGGirl said…
Hi Todd...
You have moved around alot! Nice rigs on your site. I also love the dogs! You can reach me on yahoo at balletmom1094 if you want to talk more. I arrived in NY on 9-15. Our command post was the big white trailer marked with the National Strike Force logo.... We worked with the EPA, doing site safety and air monitoring. Hope your new years was a good one. Enjoy your day today!
Lisa

Chief 29 said…
Hows it going Todd? Thanks for joining my group, Antique Hand or Horse Drawn Apparatus. Have a Happy New Year and stay safe in 09'

Randy said…
Hey how are things in the big City? Stay Safe up there.

Lion Apparel Protective Systems Group USA said…
Hi Todd,
Thanks for the add! If you need anything, just holler. We're right up the road from you. In the meanwhile, be safe out there.

Paula Bradley said…
Happy St. Patricks Day, be good and have some fun!

Karen said…
Hello from NE Ohio. I am involved with disaster response through my county's Medical Reserve Corp.