What's with all the little booster lines?

I first thought it was just "Hollywood U.K." making technical errors on shows like "London's Burning" and such... but I keep seeing it in news footage now as well.

Why do I keep seeing U.K. firefighters using little one inch "Booster" Lines for their primary interior (or even exterior) attack lines?

I am seeing them being used in the U.K. for significantly involved structure fires... not low intensity ones or mop-up.

Without the right volume of water going onto a fire, I see a delay in putting it out and even a danger to the interior attack crew. There are times when an inch-an-a-half is not big enough for interior attack.

Can someone enlighten me?

Are there different materials in U.K. homes that make the fire less intense?

Also the bunker gear I see (mostly the LFB because of the BBC and YouTube) APPEARS to be thinner than North American interior rated bunker gear... looks more like the "exterior-only" bunker gear (which my department has banned for safety reasons - don't want anyone accidently donning exterior-only gear for an interior attack). Is that the case? If it has the same protection rating, why haven't we moved to it to lighten our load? Or is there just a completely different style of interior search and supression that allows for lighter PPE?

Thanks for helping to satisfy my curiosity!

Replies are closed for this discussion. 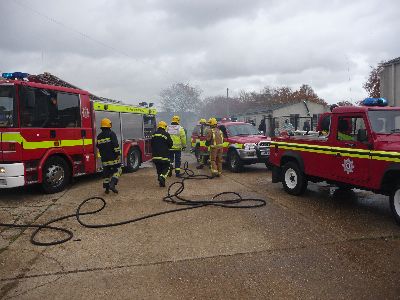 Permalink Reply by Bekks on October 26, 2010 at 3:22pm
Another picture of the little hose: 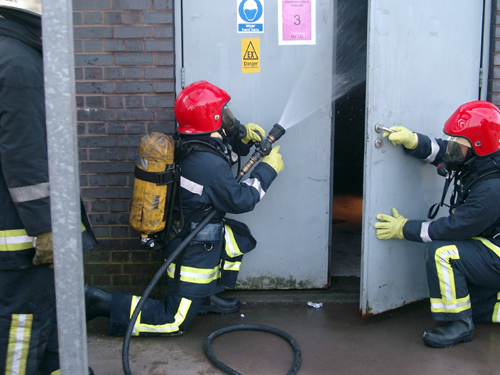 Permalink Reply by Bekks on October 26, 2010 at 4:34pm
This Bunker gear looks thin as well (not a lot of thermal protective layer).

I dug out my IFSTA textbook, just to verify for the "fact checkers" out there...lol.
I apparently remembered that lesson in hose selection almost verbatum. Too small of a hose line being dangerous for anything bigger than a small rubbish fire.

Permalink Reply by Fireyladd - Chief Sharp on October 26, 2010 at 5:56pm
This would be beter responded to if posted in the regular discussion area.

What is with all the Booster lines in the U.K.?
Posted by Bekks on October 26, 2010 at 10:41pm in General Firefighting & Rescue Discussion