What would you name a Firehouse stray?

IT began about 10 or twelve years a back, after dusk The gate gets closed, securing the parking lot and back yard of my Career firehouse.. inside the fence there are bushes a couple feet apart and "she" was seen slinking in under one spot in the fence and down behind the bushes, looking very much like a fox, but larger. In the back corner a brush heep trimmings and a quiet place, and maybe a field mouse nest to raid, the jingling of the gate being opened was her que every day to go out and make her way around... as she became confident with the routine, she'd even become brazen and decided the hood of the old chiefs station wagon was off the ground and fairly safe as long as "the men" didnt come and take it, loading it full of smelly coats and men.. One sunday evening I took some steak scraps from the meal out and from two cars over tossed a piece of meat over and onto the hood next to her, but she didnt act starved nor did she run, but she was street wise and wary, she caught the scent, but didnt think she should trust "the man"... until I nibbled a piece and then she felt she could trust me.. the very last piece she took from my hand, fully trusting me. yet doing so gently and carefully... I think it was the following week or two , One of the engine drivers who was working nites and mentioned how beautiful she was and show no one would ever get close or tame her, she was too wary of human contact, he was quite surprised when he returned that afternoon shift and asked me who's dog was sitting at my feet...Not even realizing it was "her". She soon began making the rounds checking each member coming and going, but she introduced herself to each one, one by one.. Soon she found her niche or place One time, she followed one of the guys who reported in and found the companies at a building fire 1/2 a block away, it seems Smokey made her way to the second floor/fire floor during overhaul.. and commanded that sector for an hour or so ..she just wanted to be with her guys. I eventually took her home with me, gave up working two seasonal side jobs to be sure she was treated right... after several years with me a friend suggested we attend a fund raiser for one of the local shelters because they had a local "pet physic" who was charging 5 bucks to ask 2 questions too raise money for the shelter... I said sure lets go...and began thinking what and how best to ask without giving anything away.. the day came and I payed ten for my reading and my freinds, and with a grain of salt I asked if Smokey had a name before I'd named her...Knowing WE'd had a few people speak to her in some of the non english languages we have around our neighborhood, to no avail. The Pet Physic lady Takes the dogs snout in her palm, looks into her eyes and says I am seeing she had lots of people "around her", but no one in her life, feeding and caring for her, and given the dog was from an inner city neighborhood at a time when there were packs of strays.. I realized That she was pretty good, but even so, I wasn't convinced... The 2nd question was What is the dogs favorite thing, that we do together? One might expect go to the park, throw balls , sticks frisbees nope... not even "play with the soccer balls.. which is definately #2. The physic again cradles her face looks astonished at me and says I am not sure how to describe it, but placed her hand out, Palm down flat and made a wave motion or as in water bed wave..., (not howdy...)

You see , after collaring her the 1st time and taking her "away" out fo a ride to the park, we went to the seashore and as a cheep date, I skipped some stones in the waves MUCH to her delight, she began chasing the splashes and romping around having a great time!! Since that day, its pretty much something we do everyday in warm weather and occasionally even in winter and after the surface freezes she loves If I skip em on the ice, though she doesn't chase them.. or even ifI skip them on pavement.... silly? yep, The more skips the more excited she gets and ifitgoes in some unexpected manner its all the better... but it delights her.. In the slide show look at her face in the last shot with Cheyenne at the stream... Smokey thinks I am gonna "throw stones at her"..lol and is grinning ear to ear , what could be better your favorite humans, your soul sister and stones .. wooo hoo... I should mention, the soccer ball she has at the moment is number 16, some lost some punctured by freinds a couple just plain wore the skins off , she has about twenty five stuffed animals, tennis balls that squeek... etc etc.. every night after dinner, she will come into the living room, and sit facing me, look up into my eyes andI have to go down "the list" of "desert". I am expected to ask her IF she wants Iams biskits, puperoni, Duck fillet jerky, chicken jerky, Beef jerky etc etc... she will answer when I get to her choice for the night lol

Permalink Reply by SMOKEnPipesJim on January 14, 2009 at 12:18am
Thanks Dale, yeah she is a beauty.. as far as the Chow goes, I doubt it since her skull/facial bone structure and her snout is narrower and less bulky like a Chows' and she has 100% pink tongue (chow mixs often have black spots on the tongue) Besides Mortimer in the one of my pics, she has another Male Chow, who literally trips over himself when he see's her.. Its hilarious he is so infatuated with this older woman..
With her face, her temperment, her "natural" K-9 abilities and "smarts" Both street smarts as well as Coyote/Wolf/natural world smarts I suspect she is part Samoyeed and even though she isnt white maybe a mix of a shepard or shepard.. In the summer evening when the dew is in the long grass she stomps around in "zones" and she kicks up crickets, as well as moles, voles, field mice...etc .. which might not be appealing to us, but certainly is all good protein... I've seen her kick up a rabbit, which of course bounds off into the underbrush... the dog sniffs Back to where she caught the scent and follows her nose back to the den.. She has had many face to face encounters with skunks and NEVER been sprayed, in fact, one night she was ahead of me 60 feet off leash going through some old abandoned horse corrals.. It was a new moon and i could just about see her blond butt and tail, when I noticed about 7 feet right of her two distinct white verticle stripes, I called her to go left and she turned and I watched as the stripes waddled after her.. It turned outto be a very young skunk nose to butt about 7 or 8 inches Imagine my dismay when they both faced off, and did the "puppy play bow" thing and actually played like puppies, That skunk was around that area for over a year, and we had contact many times ( I almost stepped on him another night..lol ) Smokey also has an affinity for Siberian huskies, Malimutes, WolfHybreds, Chows, Akitas, Norwegian elkounds, Spritz's, Icelandic sheepdogs, any of the cold weather similar looking dogs to her, she is like HEY cuz !! whatup?... She Has chased deer , she has eaten venison, she has even tracked a doe for a bowhunter we met one day during hunting season..( unexpectedly) the Hunter was an older retired fella in atree stand and we drove the doe towards him unknowingly, we talked uneasilyhim notknowing if i was a tree hugger, I finally asked him since Smokey Definately had the scent, she was going nutz .. sure enough we treked about 1/3 mile and I heard a sound like Homer Simpson saying doah which was smokey finding the dead animal, once he determined it was dead , she walked up and grabbed a leg trying to get it to getup and play,,,,lol took me twenty minutes to leash her so he could field dress her.. a couple days later the hunter left off some venison for both of us..:) 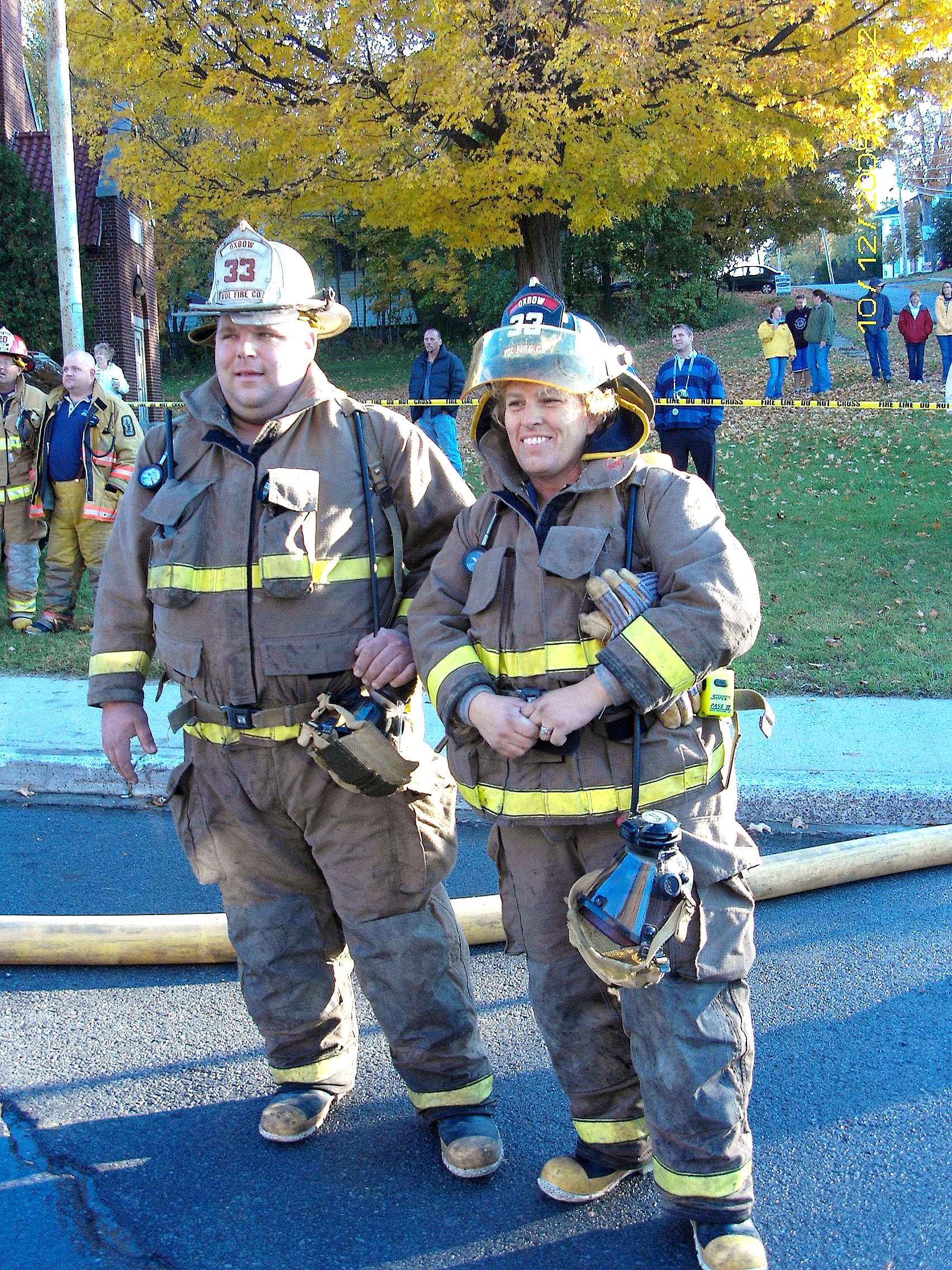 Permalink Reply by SMOKEnPipesJim on January 19, 2009 at 1:47pm
Thanks Anne, she is a beautiful animal, she knows it, but it doesnt go to her head..often..lol... Last night we Had a nice moderate snowfall, about 7 pm, I took her up to our local park, she truely Loves Being out an about but especially when its snowing like it was last night, when its muffled and all youcan hear is the "roar" of the snow...we spent nearly two hours early On I was trying to keep up with her,, before long I was waiting for her to catch up.. time well spent

Permalink Reply by Marc on February 11, 2009 at 11:18pm
i see a lond haired german sheperd mixed with Samoyeed

Permalink Reply by Deanna on March 22, 2009 at 7:33pm
The department I was with had a coonhound, heeler, who knows mix. We named him crash. He would always be there coming back from a call. He was really a firehouse bum. 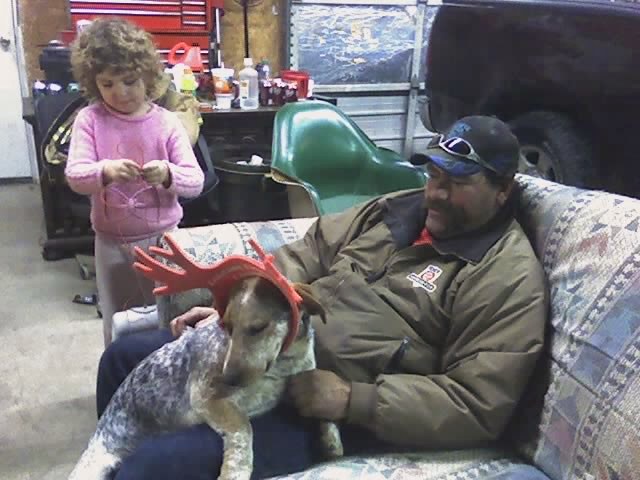 here is crash and my old chief

Permalink Reply by SMOKEnPipesJim on January 19, 2010 at 7:26am
HAHAHA reindog beautiful Critter Deanna

Permalink Reply by SMOKEnPipesJim on May 4, 2010 at 12:07pm
Yesterday May 3rd 2010 I took Her to the vet, she's been having some issues the most obvious sign a Bloated look, distended Abdomen, The vet took a couple tests and found fluid in her abdomen, and the fluid gave him signs of a tumor on an organ like liver or kidney, due to her advanced age operating would merely cause extended discomfort and most likely not a positive outcome, so I decided to have her Euthenized, while i held her and gave her all my love... never an easy thing, but harder in My case ..:(