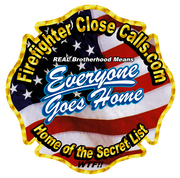 10/21/1900 “shortly after midnight a fire broke out in the 4-story, wood frame, A. B. Hinman packing plant on Vandalia Street 200 feet north of University Avenue in Saint Paul, MN. A southwesterly wind fanned the flames as the fire quickly extended to an adjacent icehouse and a single-story building owned by the Northwest Lime […]

ORLANDO, Fla. – An Orange County Fire Rescue (OCFR) battalion chief was fired after officials say he failed to follow a direct order. His attorney says the decision has to do with the county’s rule to reprimand employees who don’t get the COVID-19 vaccine. Stephen Davis had been with the department since 2007 and had command of […]

10/20/1944 “a natural gas “spill” and fire in Cleveland, Ohio around 2:15 p.m. killed 130 and injured 225 when a cylindrical tank failed and released the contents into the nearby streets and sewers that promptly ignited. A second tank toppled over after about 20 minutes later releasing 9,400 gallons of LNG that ignited; the accident […]

FARMINGTON, Maine — A lawsuit on behalf of firefighters involved in the deadly Farmington explosion has been settled two years after the incident, according to an attorney. Six firefighters and the estate of Captain Michael Bell settled with C.N. Brown Company of South Paris and Techno Metal Post Maine of Manchester. No other details about the settlement […]

ALEXANDER, Ark — A firefighter is recovering Tuesday morning after getting burned while responding to a mobile home fire in Alexander. The Collegeville and Crystal Fire Departments were among the crews that responded just before 11 p.m. at 4th and Alexander Road. Fire crews say two mobile homes were fully engulfed when they arrived. The […]

10/19/1857 “Chicago experienced one of its first fire disasters at a five-story brick building at 109-11 South Water St., between Clark and Dearborn Streets. The building housed a brothel, and according to most accounts, the fire began after someone knocked over a lamp. No lives were lost in this building, but the flames spread rapidly […]

Montreal fire chief Richard Liebmann confirmed Monday morning that search and rescue crews have spotted the body of the missing firefighter in the Saint Lawrence River among the wreckage of the boat that sunk. The firefighter from the Montreal Fire Department (SSIM) went under the water of the St. Lawrence River on Sunday, in Montreal, […]

10/18/1984 the Alexander Hamilton Hotel fire killed fifteen and injured over fifty in Paterson, NJ. located at the corner of Market and Church Streets. The fire started at 12:14 a.m. and went to three alarms in the eight-story building, trapping some victims and forcing others to jump. The fire was deliberately set by Russell Conklin […]

MONTREAL — Rescue workers are looking for a firefighter fell into the St. Lawrence river after a boat carrying people from a previous rescue mission capsized near the Lachine Rapids. The boat reportedly sank shortly after 7:10 p.m. According to Longueuil Fire Division Chief Stéphane Difruscia, Montreal firefighters responded to a distress signal from another […]

10/17/1966 the Wonder Drugs on East 23rd St New York, NY a mercantile building fire killed twelve firefighters at 9:36 p.m. E-18 and L-7 responded to fire in the store’s basement. A five-inch insulated concrete floor collapsed sending ten men into the inferno, two were killed when a fireball exploded from the basement. “A raging […]