Group where response to Chemical Biological Radiological Nuclear and Explosive incidents can be discussed: including exercises, SOGs, hazard analysis and other pertinent topics

NEWS UPDATE:Chemical Corps tests new equipment(Army.mil)Soldiers at Fort Hood field-tested the newest equipment for chemical, biological, radiological and nuclear reconnaissance during an exercise Feb. 28 - March 4. The new M1135 NBC Reconnaissance Vehicle, a Stryker-platform vehicle capable of detecting and identifying chemi¬cal, biological, radiological and nuclear, commonly referred to as CBRN, hazards, was used by Soldier of the 181st CBRN Company.They also field-tested the new Dismounted Reconnaissance Sets, Kits and Outfits, or DRSKO. Outwardly the modular DRSKO looks like an unmarked storage container. But equipment inside allows Soldiers to detect and identify CBRN hazards as well as toxic industrial chemicals and materials. It also contains a variety of protective suits and equip¬ment for decontamination, sample collection, marking contaminated areas, and hazard reporting.“The equipment we have is an extreme improvement over what’s been around in the past,” said 1st Lt. Jaciel Guerrero, the 3rd Platoon leader, 181st CBRN Company. “Not only do we have the capabilities to detect conventional weapons of mass destruction, normal chemical agents, biological, radiological and nuclear agents, but now we can detect a lot of the industrial chemicals and industrial materials you may find anywhere, no matter what country or what region you’re in.”Senators question U.S. preparedness in wake of Japan’s crisis(Government Executive)Members of the Senate Homeland Security and Governmental Affairs Committee on March 17 questioned which federal agency and individ¬ual within the federal government would take the lead in responding to a catastrophe like the one gripping Japan. FEMA Administrator Craig Fugate said that the response would depend on several factors, such as where the disaster occurred and whether local first responders survived. Overall, Fugate said, FEMA has made “significant progress” in preparing to deal with a catastrophe, but “we have much work to be done.” But FEMA does not yet have an adequate system to assess available due to quake-induced fires at large oil refineries and the ab¬sence — or precarious condition — of the electrical grid. Six refiner¬ies were shut down after the quake. The loss of roughly 25 percent of electric capacity — including that at the Fukushima nuclear plants — will be difficult to restore in the near-term. Further, while the highway and other transportation systems by-and-large did not collapse, they did suffer enough damage to seriously complicate resupply efforts. As a result, in the Tohoku region most impacted, at least 500,000 evacuees and up to six million survivors have been left largely to what¬ever happened to be at hand.On March 15, the Japanese Department of Social Services actu¬ally ordered a “pause” in resupply to the Northeast because the DSS was not sure the supply was going to the right places and it did not have “precise information” or a “holistic picture.” As a US colleague remarked, “leadership craving better situational awareness is the universal problem.”On March 17, the President of the largest Japanese business associa¬tion is quoted as saying, ”Though companies are trying to send relief supplies, they cannot secure fuel for returning,” stressing that gasoline stations along expressways and supply roads are in need of swift sup¬plies of gasoline.What is now beginning to happen across Fukushima Prefecture and the Kanto region (Metropolitan Tokyo) is an emerging exodus south¬west. The fear of radiation, lack of essential supplies, and doubt that conditions will improve anytime soon is unfolding farther and deeper… physically, socially, psychologically.First-Ever National EAS Test Will Come From the White House(Emergency Management Magazine)For the first time, the White House will take over the nation’s airwaves to speak to the American public through the Emergency Alert System (EAS). The FCC recently ordered all participants in the EAS to take part in a national test later this year. While state and local officials throughout the na¬tion regularly use the EAS, a president has never used it — not even for a test. FEMA Assistant Administrator Damon Penn recently told broadcasters that “we have to show the courage to have a test so we know what works and doesn’t work.” Exact timing of the test currently is unknown.

In recent years, much attention and funding has been aimed at increasing the operational capabilities of first response organizations when confronted by CBRNE incidents.  However, when examining both…Continue

Triage for Contaminated Victims of a Mass Casualty Incident

When you examine the START triage system, increased respirations are a major landmark for determining patient severity.  However, during a chemical incident in which respiratory embarassment…Continue

You need to be a member of CBRNE Response to add comments!

Friendly Reminder To Get Ready For ERG 2012

Four years have passed since the U.S. Department of Transportation released the Emergency Response Guide 2008 which means that it's now time for a new edition of the ERG.

Like a trusty sidekick, the ERG should always be on your person or at least not very far from you if there is a possibility that the work you do will have you confronted with a HAZMAT incident at some point.

The Emergency Response Guide 2012 is due to come out very soon so be sure to make the switch from your ERG 2008 for the 2012 version.

There are some notable changes in the upcoming 2012 version that are not in the 2008 version. According to the U.S. Dept. of Transportation those changes include:

As well as several other notable changes. A summary of all the new changes can be seen at this link:

Another notable change involves the apperance of the ERG itself. There has been talk that the ERG 2012 will have the same cover style that it has always had (see below): 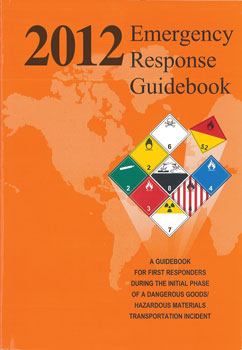 But there is also conflicting talk that the cover style of the ERG 2012 will be new and completely different (see below): 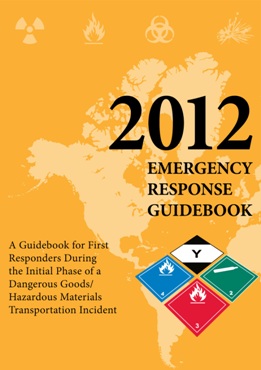 Either way, regardless of the cover that is finally chosen for the ERG 2012, the content inside will be different from the prior version which is why it is important to get it. Even if you don't get the ERG 2012 right away and continue to use the 2008 version for awhile, you should really make it a priority to obtain the 2012 version as soon as possible.

The conference begins May 17 and continues until May 20th. The conference is sponsored by the International Association of Fire Chiefs (IACF) and highlights the latest trends in HAZMATemergency response, training and equipment.

Emergency responders serving in fire departments, the private industry, Dept. of EnvironmentalProtection, the federal government and various other agencies are expected to attend this event. The large number of individuals and organizations means that there will be plenty of opportunities to network.

*Emergency Response to Hydrogen Peroxide Incidents*Geographic Information System (GIS) technology for Hazmat Preparedness and Response
*The History of Hazmat
*The Once in a Career Event
*Chemical Suicides: Information for the First Responder
*Hazmat Prevention for K-12 Schools

As well as many other workshops besides the ones listed here.

Even if you aren't able to make early registration and have to pay full price, the conference still sounds like it is very much worth attending. The 2012 conference is shaping up to be the best on record.

Those with IAFC membership pay less than those without membership whether for early or regular registration. However, there are scholarships available for those who are unable to pay full price for the conference.

For those who are interested in attending they can find out more at:

Comment by Shawn on July 13, 2011 at 1:31pm
For those of you living in or around York County in the state of Pennsylvania, the York County Hazardous Materials Response team is desperately in need of new members.

The team is going through a dire crisis directly related to manpower shortages and may have to disband if it cannot increase it's ranks.

The team is entirely made up of volunteers.

York County HAZMAT is a highly trained and equiped team under the command of the County of York Department of Emergency Services.

If the team's ranks continue to drop in number, the team will be disbanded and a HAZMAT team from a neighboring county will be tasked with handling HAZMAT incidents in York County.

Of course, waiting for a HAZMAT team from another county could allow a toxic substances to spread and endanger property, the environment and lives.

If you live in the area and want to be apart of a HAZMAT team, here is your opportunity.

Those with questions about joining or wanting to offer assistance are encouraged to call Tom Graybill at (717)840-2913.

The following are helpful links to the team's home page and a news article on the situation:

Comment by Rick Powell on March 24, 2011 at 9:40am
I have developed and delivered several courses on CBR-D while a contractor with the US Navy at Naval Support Activity in Bahrain, if anyone is interested. Stay safe out there!