Tis the Season for Chimney Fires

What does your department do to prepare your firefighters for the upcoming chimney fire season? Do you cover all of the newer heating appliances and units? How about all of the ways a chimney can be lined today?  How is one expected to mitigate an incident unless they are well prepared.  The old days of a brick or block chimney are quickly becoming the minority... 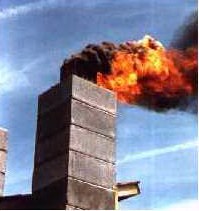 When I was a volunteer we did chimney sweeping as "training" for a donation.  It was good PR tool but to be honest, I learned nothing in the aspect of chimney design, features, and materials.  It took me a while to figure out these features or unique quirks from hands on installations.

Do you feel training should be stepped up or is everybody good with it?

I would think training should be stepped up, hell even discussed. To be honest, such a fire for us, isn't too common and when they do occur, it is treated as a structural response. Dry chem is used and we have chimney bombs etc, but for the most part, most issues beyond the chimney become a structural fire approach. A TIC will be used to scan and so forth and sometimes ceilings pulled etc to prevent extention, but overall, chimney desing nor in depth training is really focused on from a broad perspective.

I have seen some unnecessary damage for times where a TIC was used, and what was interpreted as excessive heat or "fire" was just normal operating hi-temp metal components hidden behind a wall. Love being a Chief when you have to explain to the homeowner or insurance adjuster as to why there is no evidence of extension but a ton of FD damage.

I took pieces of my old chimney down as training aids for those who never saw a clay tile lined with creosote, how a factory built chimney pipe is constructed, and how the connection between the appliance and chimney is made.

A good follow-up topic might be: how many departments even carry chimney cleaning equipment on their apparatus?  I was at a fire with a mutual aid department once, and in response to a request for a chimney brush from their apparatus I was told "We don't clean chimneys."

Chimney brushes and rods, a can for carrying the firebox contents, fiberglass blanket to go in front of the appliance, and chimney bombs are a good start.  TFT makes a nozzle which is lowered down the chimney to apply a fine water spray inside the flue.

The dream chimney fire incident is where you just take in a portable water extinguisher, put your finger over the nozzle and create a fan type spray into the chimney. The delivered water converts to steam and the fire goes out. No damage from water, hose lines, smoke... just a clean get in and get out. Isn't that how fire departments in the midwest and on the east coast fight chimney fires? lol!

During my entire 30-year career, I don't recall a single training session that focused on chimney fires. I think this is an outstanding post and hope that more information is shared here in regard to the questions you posed. I really don't think many people want to go on record saying what I shared above, but you hit the nail on the head with this post and identified a forum discussion that will benefit many, giving those who read this forum an advantage this winter when the deal with chimney fires, presumably a little more complex than my one-can chimney fire evolution... As usual, great post FETC! CBz :D

There is a certain amount of irony in chimneys and chimney fires.

For starters, there are a lot of people here who like to have the occasional fire, many who burn throughout the season and then those that burn only when they lose power and need some heat.

So why is it, when heating season begins we get so many calls for "smell of smoke in the area of..."

From my experience, there's no magic to dealing with a chimney fire.  A crew goes to the roof to remove any weather caps and mans the chains; another crew goes interior, puts a chimney flare in the firebox or woodstove and, once the fire is out, cleans out the firebox/woodstove.  Chains are dropped a few times, visual examination from top and bottom, TIC used to check for any extension (typically, the same person takes all TIC readings).  Owner (and dispatch) is notified that the chimney is Out Of Service until it has been examined by a certified chimney specialist.

A word to the wise, when checking the chimney, if it is observed that there is NO chimney liner (brick only, no clay liner or steel flue) extra care should be taken, there have been instances where, in an unlined chimney that experienced a chimney fire, embers have made their way through gaps where the mortar was missing, got into the attic, smoldered for a few hours and then rekindled, taking the roof off.

We don't use water in a chimney, chimney flares work fine.  The risk of cracking the liner from introducing water isn't worth the liability.  Steam is moist and, I reckon, can have the same affect as liquid water in its ability to crack liners.

One final note: We had one chimney fire and it was discovered that in years past, there had been a free-standing woodstove in the room, with chimney pipe that went through the wall into the chimney.  They didn't use a thimble and, when they removed the woodstove they covered up the hole in the brick chimney with a piece of aluminum flashing and then patched the hole in the drywall.  Fires in the fireplace weakened the aluminum (and its attachment) and when the chimney fire occurred, the rushing air blew off the flashing from the brick and the fire was able to extend into the wall, behind the drywall.  It was caught in time and no major damage occurred but....

Chimney fire calls can be a pain but they should always be taken seriously.  Every engine has a bucket with chains, asbestos blanket(s), mirror (for looking UP the chimney) and chimney flares. Pretty much everyone has been to a number of these calls but we do a refresher, mostly to check that everything we need is onboard.

Jack, your description of the chimney fire with the flashing-patched hole in the chimney could describe many of the situations we have seen.  That is exactly why chimney fires should always be treated as potential structure fires.

Some departments use the fine water mist nozzle to extinguish flue fires.  The thinking seems to be "the flue is already ruined" which in the case of a clay tile liner, it generally is. In stainless steel pipes a couple passes with brush or chains is usually good enough to remove all the burning residue.

We have completely disassembled several masonry chimneys over the years, all the way to the ground, because of burning creosote in the concrete block surrounding a clay flue.  There is no satisfactory alternative to making sure all fire has been extinguished unless the thing is completely overhauled.

These chimneys present with vertical cracks extending several feet across several block sections, with smoke pushing through the cracks. The cracks are due to previous flue fires which were so hot that not only was the tile damaged but the exterior block as well. Over time the creosote flows through the cracks to the void space between the flue and outer block.

I hate these since I know we will be there for a while with sledge hammers and pry bars, and will have to explain to the owner that the chimney is coming down.

If you want a cheap extinguishing agent for these fires, you can use the contents of fire extinguisher that has lost (ALL) of its pressure. simply put the contents into a few ziplock sandwich bags. You can toss these into the top of the chimney, the bag melts and the powder is released.  Make sure you store them in a good closed container on your truck or you will have a huge mess.

This is not an answer to all chimney fires, but works well on some of them.

Being in the area of the East Coast earthquake we are waiting to see how many chimney fires will happen during the winter months. How many people had their chimneies checked for damage after the first and the aftershocks.

Many of you are correct, chimney design has alot to do with knowldge of building construction. Exterior chimney, interior chimney, center chimney, single or multi flue, fireplaces, woodstoves, hydrocarbon heating appliances oil, gas, FP inserts, the newer pellet stoves, etc. The components are far greater than the old school days of an unlined chimney and traditional fireplace.  Liners alone are multi, clay, tile, concrete, poured-in- place or metal/stainless lined. These all have unique quirks as I call it, with how the components mate up and can cause an increase in creosote build up. The older dwellings with multi thimble connections now covered over "correctly and/or incorrectly" can have a direct effect on horizontal/vertical fire spread when covered over. The newer lightweight homes and condos with wood-box fake chimneys and the components used inide to make a chimeny, like the chimeny fire in the above picture. Some of these components can have significant temp ratings, double, triple lined etc. Things that a TIC see as alot of heat but have yet to damage or breech the lining. I have seen guys, scratch their head when I asked how is "shelf" designed in a traditional older fireplace design and where do we see the most exposure to flammable products, like when the older steel components of the shelf that have weakened over time from rain and moisture and now the heat and flame have capabilities to spread horizontal or vertical in the mantle area of the wall. With all that said, I developed a class that provides greater awareness of the appliances used and common factors with many different heating sources and components. If you don't have a guy on the department that can help you out, contact a local chimney builder and sweep who have alot of knowledge and components to show the local FD members in a training room.