Hello again
Recently in my community during a severe thunderstorm fires were breaking out in multiple districts and I was wondering as an explorer what should I be thinking when I join the Fire Service when these emergencies happen. How can I prepare my self as a firefighter during electrical storms. What are the biggest safety issues during the storms, and this might sound really idiotic, but are the fires caused by lightning different and how?
thank you for any responses given I really appreciate them. 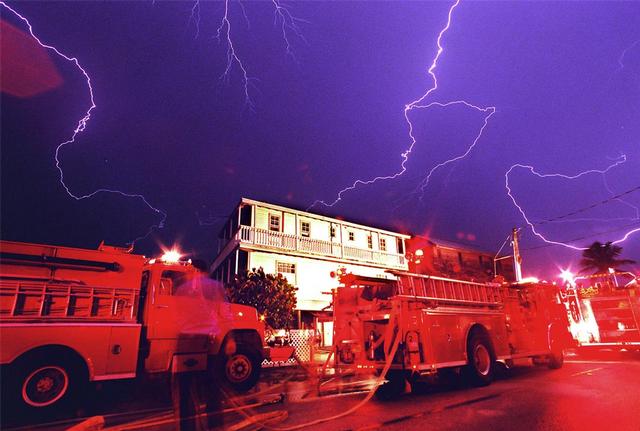 Responding to an incident in bad weather where lightning was a factor is always a "hair raising" experience... When in the engine, I always felt safe. It's working the MVA, in the rain, with lighting strikes that makes one a little nervous... With that said, here a are some salient facts to consider Alex, with the exception of volcanoes... You never know who will be reading this considering it is an international forum for firefighters. Plus I have an extensive geology background... Couldn't resist.

• Wearing portable electronics with headphones during a lightning storm can increase the likelihood of severe injury in the case of a strike - not only to the ears, but to anywhere on the body that the headphone cables lay against.
• Lightning is common in the summer throughout much of the U.S.A.
• Central Florida receives the most lightning strikes per square mile per year. At certain times of the year, the Rocky Mountains of Colorado receive a similarly high number of strikes.
• Metal does not actually attract lightning, as is commonly believed. Instead, it conducts the electricity in the event of a strike.
• To be safe, experts advise the general population to remove any metallic objects from your body. This includes belt buckles, bra clasps and underwires, earrings, watches, and small change in your pockets. The PPE we wear has lots of metal things...
• There is a mistaken belief that being in the water is safer, but lightning can just as easily strike water (or the electrical charge can be carried through water), and if you’re struck and rendered unconscious, you don’t want to be in the water.
• Lightning can travel several feet through the ground, so distance yourself from tall, isolated objects.
• By the same reasoning, be aware that a person may have been hit by lightning, even if you didn’t see the lightning hit the person.
• Rubber-soled boots do nothing to protect you from lightning.
• Lightning dose not only happen during thunderstorms; it can also happen during volcanic eruptions. So you should also know about volcano safety and lightning safety. The more ash there is the more likely lightning will strike.

Permalink Reply by Bill Carlisle on May 13, 2011 at 11:09am
Mike well done answer, Alex the fire started by lightning is no different than any other fire started by other reasons , It still has flames smoke and heat

Permalink Reply by steven on May 13, 2011 at 11:21am
just be safe and watch everyones back and you still have a job to do

Permalink Reply by ashfire on May 13, 2011 at 12:31pm
One of our local weather people has this saying everytime we have any storms. "When You Hear Thunder. Take Cover"
"Also you don't have to have thunder close by to be struck by lightning"
If you feel the hair on you body try to raise try to lay flat on the ground may help from getting hit.

Permalink Reply by Jack/dt on May 13, 2011 at 4:34pm
Lightening follows the path of least resistance, from sky to ground and along the ground. Metal and water are both very good conductors of electricity (lightening).

Lightening is a two-part strike; the initial strike comes down in ~50-yard 'step leaders'. The return bolt, from ground to cloud is what we see as a lightening strike. Lightening is both an electrical charge, which can electrocute you by disrupting the electric energy in your body (stopping your heart) but also injures from the intense (50,000+F) heat.

While not necessarily foolproof nor consistent, prior to a lightening strike, as the step-leader is seeking ground, a person may experience a strong 'static electricity' charge, where your hair may stand out, or a tingling. It's recommended to seek shelter but I suspect at this point, it may be a bit late.

Also, lightening can strike anywhere up to 10 (or more) miles away, in other words, a storm can send out a bolt and strike you up to 10 miles away. Hence, the expression, "a bolt out of the blue."

As to whether or not lightening fires are different, no. But they can be devilish. Lightening striking a house may not enter the house, or start a fire, where it initially hits. The bolt may follow water rivulets, gutter, downspout, phone or cable wires and enter the structure at a considerable distance from the initial strike.

I've seen it where lightening hit a house on the chimney, blew it apart, traveled down between the downspout and house, enter the corner board and blow out the other side of the corner, leaving a hole about the diameter of a pencil. Other lightening strikes I've seen hit the roof, enter the attic and start a fire there. Lightening has entered homes via underground cables/wires as well as a tree-to-ground-to-invisible (dog) fencing which it followed into the house, blowing out the electrical panel and starting a fire. The original strike was a couple of hundred feet away from the house, on a tree in the woods behind the house. Like I said, lightening strikes can be devilish.

Permalink Reply by Alexander Korsunsky on May 13, 2011 at 11:05pm
I can't say awesome enough done replies Thank You
I have learned a lot and got scared a lot but its being scared first that lets me be safe later.

Permalink Reply by Michael Richard Halmo on May 14, 2011 at 2:39pm
As a firefighter here in Northeast Pennsylvania (farmland and some mountains) we get storms alot in the spring and summer, when working a MVA it is frightening especially with lightning and flooded roads (common in my area) i have the same thoughts as you do, in our area we have never had anyone (firefighter) injured while storming out. There was more close calls with falling trees on wires, down lines, and such. One of the long term members at my station told me you have more of a risk getting hit by a tree or getting electricuted by a tree or power line then lightning. a house was hit by lightning and we treated it the same way we do with any structure fire- theres no difference besides the power lines (which is at every house). Some issues during a storm that we (firefighters) need to worry about are: fallen trees, power lines, flooded roadways. being aware of the surroundings and doing a scene size-up in your head keeps you safe and watching whats going on around you (like lightning strikes, the trees, the area around you) this is the best question ive heard/read from a junior member. Remember this: "theres never a question thats stupid that couldnt save you" always ask questions if you dont know even if they seem stupid... those questions help you stay safe

Permalink Reply by joemac on May 14, 2011 at 9:00pm
I like thunder.
It signifies surviving the lightning.

I've seen what lightning can do, and it's scary.
Anything that is so bizarre in its behavior and so devastating in its travel, is worthy of fear.

I experienced a close call with a bolt of that stuff. I was jogging across a parking lot in upstate NY in the early 70s after closing the car windows and the rain came. I was subjected to rain for maybe a minute.
A lightning bolt struck the roof of a very nearby truck and the imploding air that is thunder whooshed me up like a toy, inverted me, then dropped me.

I later had a shower and my hair was frizzed on the right side from the center part to the end of the sideburn, after it dried.
It was a month and a half before it was normal again.

I've seen some lightning-induced damage inflicted in my time.
From the roof getting hit when I was five and the local FDs showing up, to the elderly couple whose window AC unit exploded into the roof when it carried a zap,
to the 200 year-old white oak that looked like some monster had hacked at it and threw pieces in all directions, then somehow set the middle/west side of the trunk aflame.

I knew a guy who'd lightning break his arm, while he was on the ballfield.

As was said, it can go through strange paths.