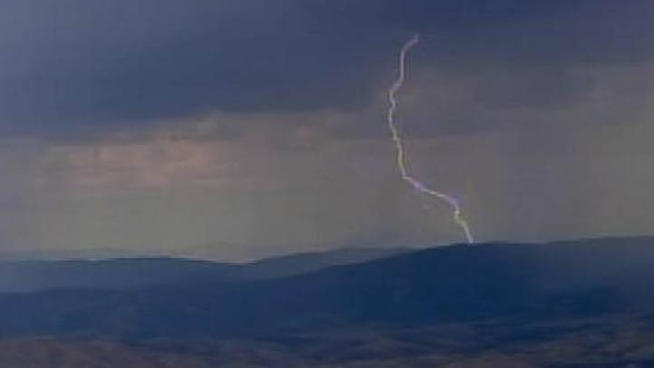 One of many lightning strikes Monday afternoon over the Los Padres National Forest.

Three firefighters were air lifted to area hospitals after being struck by lightning in the Los Padres National Forest Tuesday afternoon.

A U.S. Forest Service spokesperson says it was first reported the firefighters were in stable condition. They were battling a fire known as the Frazier One incident in Kern and Ventura Counties, accessible only by air.

A spokesperson says the firefighters were air lifted out of the forest to the nearby Ozena Fire Station off Highway 33, treated, then air lifted to the nearest hospital.

Three firefighters standing near a lightning strike were hospitalized with symptoms that included disorientation and ringing ears.

The National Forest Service firefighters were battling a 30-acre brush fire in the Mt. Pinos area near Frazier Park when lightning struck about 3:15 p.m. Tuesday.

Earlier reports indicated the strike hit all three men. According to Ventura County Fire Department, the men were within 50 feet of the lighting when it grounded.

Storms in the area had ignited several small fires in the Los Padres National Forest.

At least two of the victims are expected to check out of the hospital Tuesday night.

Could this happen with structural firefighting? 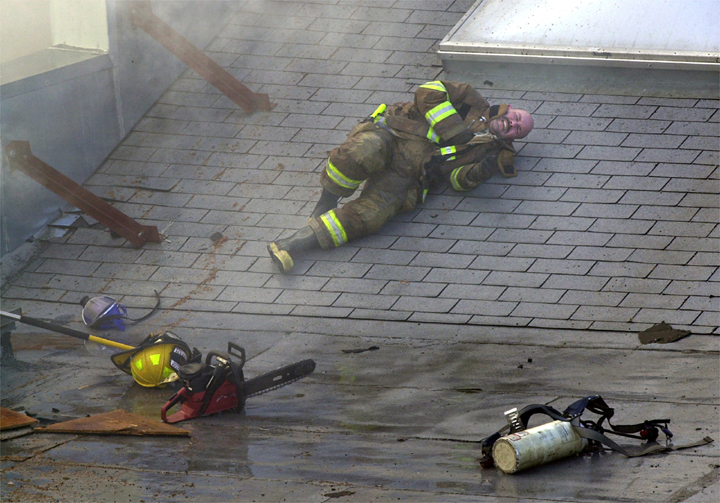 Having a lightning strike not actually hit someone is a blessing, but having a contingency plan to deal with this unlikely incident type is needed. The amount of noise it must have taken to produce ringing in the ears must have been intense for those involved.

Lightning strikes from storm fronts is not something typical for my area. Beside getting back into a vehicle and staying away from metal or tree's is my limited knowledge. This really cannot be prevented but maybe there are some hints out there from more experienced firefighters...

Can't say it can't, or won't happen here.  Every year we get a number of homes hit by lightning.  And I'd say that for every 4 lightning strikes, we get one house fire, 2 with significant damage to house and/or electrical and 1 seems to go (mostly) unscathed.

I was on one call where a severe thunderstorm blew in and we had multiple calls for strikes and alarms.  I was on the roof of a commercial bldg. investigating a possible strike and fire in a roof top unit when there was a lightning strike about 300 yards away.  My partner was already down the stairs and I was pulling the roof hatch down when command told us exit the roof.  (It seemed to take command a bit longer to process the situation than it did for us.)

We had another house hit and it started a fire in the attic.  I wasn't on that day but from what I heard, it was 'interesting' for the guys working that one as the storm was overhead and raging when they arrived and started work.

There's not much you can do, certainly won't look good if everyone drops what they're doing and rides out the storm in the rigs while the house burns down.  Probably NOT a good idea to be up in the bucket, that would be tempting fate (and the truck's outriggers give you a good, solid ground connection.)

The above being said, it's a really long shot that, if you're working a fire started from a lightning strike, that there would be a second strike; possible not that plausible.  Storm intensity wavers, shifts and the flow and concentration of positive and negative charged particles changes making a second strike unlikely.

Also, lightning strikes mostly from the ground up to the sky.  It sends stepped leaders down, searching for the best route.  Once a route of least resistance is found, the charge rises up as the return stroke.

One thing to note, lightning CAN strike from a clear blue sky.  There have been documented reports of lightning striking up to 20 miles from a storm.  So really, clear skies overhead, thunderstorm over the next town over, the risk is probably equal, at least in a storm, you're aware of the danger.  If it's one town over, it's gonna surprise the shit out of you.

I have been hit twice. Not something I recommend trying. I've also had it hit close to the pumper a couple of other times on house fires which were sparked by lightning.

Now I carry a lightning monitor which has green, yellow, and red lights to indicate how far (or near) lightning is, although it hasn't been an issue this year in southeast Texas this year. The monitors are required at UIL sanctioned outdoor school sporting events.

Permalink Reply by Mike Schlags (Captain Busy) Retd on September 18, 2011 at 4:05am
Have never seen or heard of these. Cost? Size?

Permalink Reply by Roy Walker on September 18, 2011 at 4:34am
Oldman does your unit come with q toilet paper dispenser

I have a Strike Alert II from around $70 depending on where it is purchased. There are many others on the market too. about the size of a small pager.

Permalink Reply by Oldman on September 19, 2011 at 8:31am
No TP dispenser Roy, but there are usually a couple of rolls running around behind the seats in our boosters, (AKA Type 7 engines).